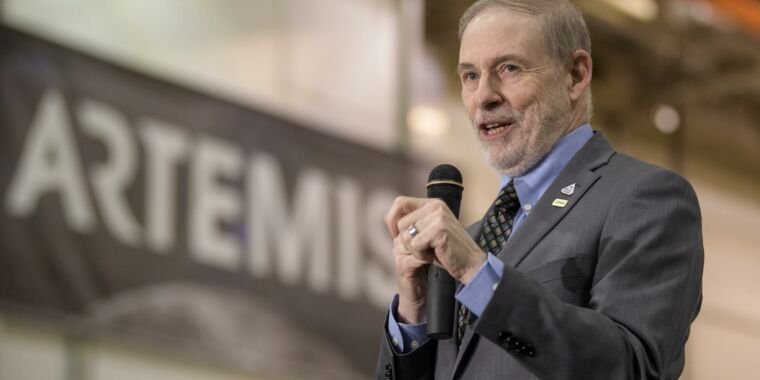 On Tuesday, NASA announced that the head of human spaceflight, Doug Loverro, had resigned after only six months at the space agency. This news, just eight days before NASA’s first human launch in nine years, has rocked the civil space community and sparked a wave of rumours.

This post will attempt to assess what we know and what we don’t know about his departure and what it means for the space agency’s future manned space programs.

Why did Doug Loverro resign?

He made a mistake during the Human Landing System purchase process, with NASA selecting bids from Blue Origin, Dynetics and SpaceX to build lunar landers as part of the Artemis program. In his letter of resignation to employees on Tuesday, Loverro admitted he had made a “mistake” earlier this year. Several sources have suggested that he has violated the Purchasing Integrity Act.

It’s worth noting that on March 25, 2020, NASA’s Inspector General announced an audit of “NASA’s acquisition strategy for the Artemis missions to land astronauts on the moon by 2024.” It seems likely that some action by Loverro was involved in this audit.

So what did he do?

Neither Loverro nor NASA administrator Jim Bridenstine speak directly about this question, but we can make an educated guess. Loverro’s main job when he was hired to replace Bill Gerstenmaier was to take humans to the moon in 2024. Period. That was his job and he took it seriously.

Loverro was also known for liking “integrated launch”, meaning he wanted to launch a complete lunar lander on a single rocket, rather than pieces of the lander on commercial rockets, which had to be mounted in orbit around the moon. . He found this approach too complicated. And-here we say the silent part out loud-the reality is that none of NASA’s three contractors selected for the human landing system is likely to be ready by 2024. Traditionally, at least 4.5 years is just way too short to get a deep-space vehicle to the surface of the moon. and back again.

So Loverro was under fire to get humans on the moon by 2024, he was concerned about most bids and preferred integrated launch. This means Loverro likely favored the design of Boeing’s bid for a Human Landing System, which involved launching an integrated lander on a “commercial” Space Launch System rocket. It seems reasonable to assume that Loverro prompted Boeing to come up with a more competitive offer. (After the awards were awarded to Blue Origin, Dynetics and SpaceX, the agency’s “source-selection statement” indicated that Boeing’s offer failed a preliminary round of consideration).

Discovering this was probably what prompted Loverro’s resignation.

How did the Inspector General find out?

What could be Boeing’s response to not winning a lunar lander contract?

What were Loverro’s true motivations?

Everyone I’ve spoken to believes that Loverro’s motivation was purely in that he was legitimately trying to get NASA to the moon in 2024. But as a source said Tuesday, “In good faith, in good faith, speeding is still speeding.” It does not appear that Loverro has chosen one contractor over another for political or financial reasons.

Rather, it seems that Loverro really believed that launching an integrated lander on the SLS rocket was the only path that had any chance of getting NASA astronauts to the surface by 2024.

Will this affect the SpaceX Crew Dragon launch?

Probably not. In Associate Administrator Steve Jurczyk and in Loverro’s deputy, Ken Bowersox, NASA has the leadership needed to give final approval to the Crew Dragon mission. If Commercial Crew Program Manager Kathy Lueders signs the mission, it will weigh a lot.

We will of course know more after Thursday’s Flight Readiness Review meeting for this launch. But at this point, people close to the mission remain relatively confident that the launch will continue toward its original May 27 date. This is a testament to the hard work of NASA and SpaceX.

So Loverro’s departure has nothing to do with SpaceX?

It doesn’t seem – at least right away.

What does this mean for Artemis?

This is a more difficult question. The program is already racing for time, so any delays to move forward with the lunar lander contracts would push Artemis further back. No protests had been filed Tuesday — Boeing and the other bidder that did not receive a contract, Vivace Corp, had the right to object to NASA’s final decision — had been filed since the lander awards were announced on April 30. three winning bidders.

That’s positive for NASA, but it will take a lot more money in the coming years to make Artemis a reality, and that’s where Congress comes in.

So where will Congress come in?

It is not clear what role Congress, if any, played in Loverro’s departure.

However, the chairman of a House subcommittee that oversees NASA, Kendra Horn of Oklahoma, tweeted on Tuesday“I am deeply concerned about this sudden resignation, especially eight days before the first scheduled launch of American astronauts on American soil in nearly a decade. Under this administration, we’ve seen a pattern of abrupt departures that flout our human space efforts.”

Based on her previous comments and her role in writing HR 5666, Horn appears to favor Boeing’s plan for an integrated lunar lander to be launched on a commercial SLS rocket. Boeing also has other allies, most notably in the US Senate, where Senator Richard Shelby chairs the credit committee.

It seems clear that Bridenstine will answer a lot of questions when he heads to Capitol Hill to seek funding for Artemis — whenever that happens in this age of COVID-19 and virtual meetings.

Is there any animosity between Bridenstine and Loverro?

There doesn’t seem to be one. The people at NASA headquarters seem quite upset by Loverro’s sudden departure. These weren’t crocodile tears.

What do you think will happen?

We only see part of the photo here. Ultimately, the White House and Congress will demand responses to this, and Boeing’s anger at not qualifying for the Human Landing System awards may spark some of the response. I wouldn’t be surprised if Boeing receives some sort of a landing system award in the future to smooth all this out.

One thing’s for sure: Jim Bridenstine’s already difficult job as head of NASA just got harder. Maybe he’s facing a Kobayashi Maru test?