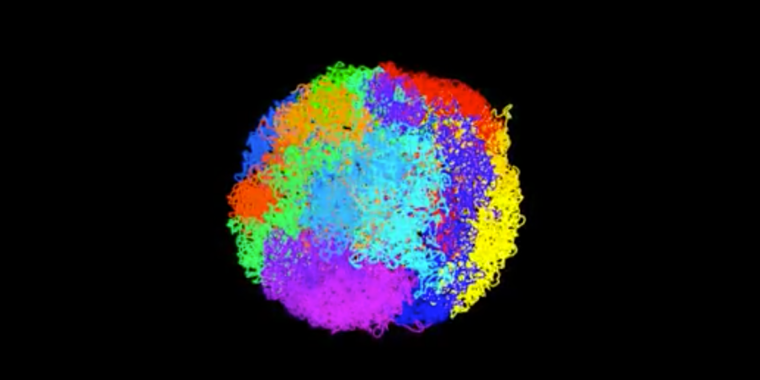 In a first, researchers have worked out a way to unravel and model the jumbled, 3D structures of intact mammalian genomes from individual cells.

The new method, published Monday in Naturecould help researchers study how the complex loops, twists and bunches of a tightly packed genome influence which bits of the blueprints are actively used by the cells, and when.

In humans, for example, genome packaging bundles nearly two meters of DNA strands into a nucleus about 0.005 millimeters wide. How all that DNA is bundled affects whether important genes are available for decoding by cellular machinery, while others are boxed up and shoved aside until they’re needed. Such carefully orchestrated genetic activity affects everything a cell does – from performing basic functions, to allowing stem cells to differentiate into any type of cell, to causing disease.

Tom Collins, a genetics and molecular scientist at Wellcome Trust, who was not an author on the study, called the new, more detailed method an exciting step forward. “This detail will reveal some of the underlying principles that govern the organization of our genomes, for example how chromosomes interact or how structure can influence whether genes are turned on or off,” he said in a statement. “If we can apply this method to cells with aberrant genomes, such as cancer cells, we may be able to better understand exactly what goes wrong to cause disease and how to develop solutions to correct it.”

To view DNA packaging in high resolution, researchers from the University of Cambridge and the Wellcome Trust-MRC Stem Cell Institute have joined colleagues to combine cell images and a molecular technique called Hi-C. First, the researchers took super-zoomed images of the genomes of eight mouse embryonic stem cells. Next, researchers turned to Hi-C, a well-established method to reveal the structure of genome packaging based on DNA sequences captured in close proximity to each other. (Hi-C is not an acronym. It’s a riff on 3C, short for Chromosome Conformation Capture Analysis.)

Imagine two short pieces of DNA pinched together in the middle by a piece of tape, creating an X shape. Researchers then fuse those dangling DNA fragments together, creating a single piece of DNA from the two fragments that were once physically close together. After removing the tape, the researchers can track the fusion points and reveal which pieces of DNA were close together thanks to the packaging.

Of the eight stem cells, processed separately, the researchers recorded between 37,000 and 122,000 DNA connections. This represents only 1.2 to 4.1 percent of the total possible nodes that could be in the genomes. But when combined with the high-resolution images, they captured enough to put together 3D textures. When the researchers overlaid data on their 3-D structures indicating which genes were active or dormant, that data matched the positions of the genes in the messy balls.

“Knowing where all the genes and control elements are at any given time will help us understand the molecular mechanisms that control and maintain their expression,” said Ernest Laue, the study’s lead author and biochemist at Cambridge.