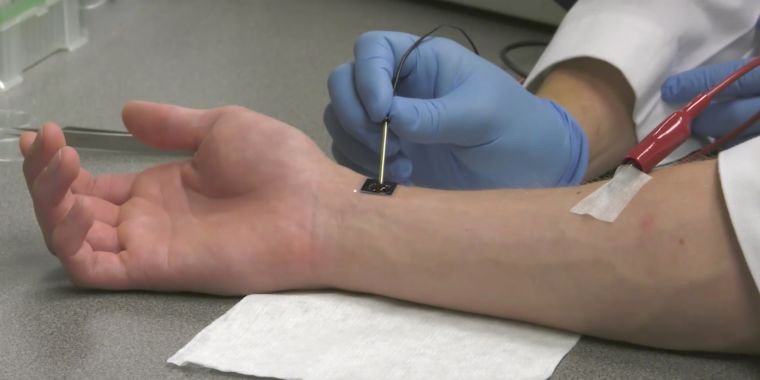 With a jolt of a tiny chip, everyday skin cells can turn into medical misfits.

The technology, published this week in Nature Nanotechnology, is still a long way from confirmed clinical applications in humans. But the Ohio State researchers behind the chip are optimistic that it could one day perform countless medical feats, including healing serious injuries, restoring diseased organs, erasing brain damage and even turning back the clock on aging tissues.

“The concept is very simple,” Lee said in a press statement. “In fact, we were even surprised that it worked so well. In my lab, we have ongoing research to understand the mechanism and do it even better. So this is the start, there is more to come.”

Their concept is similar to other cell-based regenerative therapies in development, but it skips some annoying steps. Some other methods explored by researchers – and dubious clinics – include harvesting mature cells from patients, reprogramming them to revert to stem cells, and then injecting those cells back into patients, where they develop into a necessary cell type.

But this setup has snags. Researchers often use viruses to provide the genetic elements that reprogram the cells, which have been shown to cause cancer in some animal studies. The method also requires a lot of manipulation of cells in the lab, adding complications. It’s unclear if the suspected stem cell clinics are even successful at reprogramming cells.

The method used by Lee, Sen and colleagues makes a virus and any cellular treatment unnecessary. The electrical pulse opens pores in cells that allow direct genetic delivery – a process called electroporation. The researchers skipped the need to create stem cells by using pre-existing methods to convert one cell type directly into another. In general, this works by introducing bits of genetic material that code for gene regulators that are key to a specific cell type. Once delivered, these regulators can turn genes on or off so cells can start behaving like the other cell type. Such a method has been developed for making liver, brain and vascular cells from other cell types.

Finally, the researchers’ method also all takes place on a patch of skin from a living subject, potentially directly where it’s needed — no cell harvests or lab manipulations are required. (That said, the researchers note that future therapies could use skin patches to generate specific cell types that can then be transferred to other locations in the body if needed.)

So far, the researchers have focused on making brain cells and vasculature cells from skin cells. In early experiments, their direct delivery proved effective in converting the cells. The researcher verified that the converted cells reflected the gene expression profiles of normal brain and vascular cells – the pattern of genes they turned on and off.

In their ultimate test, the researchers cut leg arteries in a handful of mice. Next, a researcher placed nanochips over the injuries, loaded with genetic ingredients for converting skin cells into vasculature cells. The conversion reached cells deep in the skin layers. After a week, the researchers saw more blood flow and less tissue death in the treated mice compared to untreated control animals.

Much work remains to be done to test the idea and prove it effective for certain treatments. But the researchers are optimistic. They conclude in the study that the technology “has the potential to eventually enable the use of a patient’s own tissue as a productive bioreactor with immunosurveillance.”