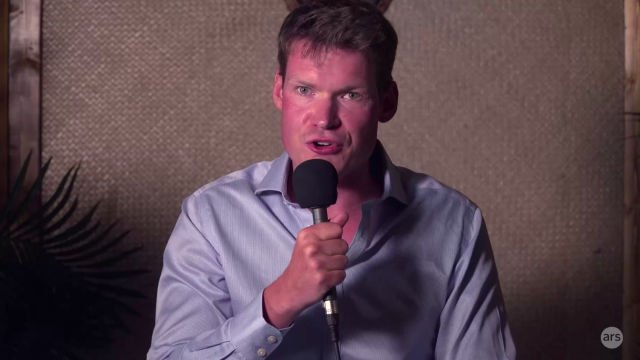 Last week at Oakland’s legendary Longitude tiki bar, we filmed our fourth episode of Ars Technica Live, with special guest Hannu Rajaniemi. Born in a small town in Finland, Rajaniemi has had a fascinating career at the intersection of science, technology and science fiction. He earned a degree in physics in Scotland, then founded a research consultancy that worked with groups such as the European Space Agency to solve what Rajaniemi called “mathematical problems.” And then he was inspired by science fiction author (and neighbor) Charles Stross to start writing fiction. In 2010, he published the first book in his acclaimed Quantum Thief trilogy.

Ars contributor Tiffany Kelly and I asked him about his dual careers in science and science fiction. He said it all started with a Jules Verne obsession. He wanted to build a ship like Captain Nemo’s Nautilus, so he decided to become a physicist. At the same time, he became fascinated with role-playing games and LARPing (live-action role-playing), which is treated as an art form in Finland and other Scandinavian countries. He told us some terrifying stories about gaming and then discussed his transition to becoming a fiction writer and entrepreneur in Scotland. Along the way, he regaled us with stories of how his work in science and fiction blended together in surprising ways (he got a job once because the recruiting manager had read one of Rajaniemi’s novels and wanted to develop some of the science fiction stories). -fi tech in the book). We asked if there’s any sci-fi he’s excited about, and Rajaniemi said he loved it Best American Science Fiction and Fantasy 2015 anthology, edited by John Joseph Adams and Joe Hill (he also loved Hill’s new novel, The fireman). As for TV, he advised everyone to watch Suspectthe recently concluded CBS series on the rise of AI.

Rajaniemi recently left Scotland to move to the San Francisco Bay Area; he is one of the founders of biotech startup Helix Nano, which is still in stealth mode. When asked about the similarities between writing a sci-fi novel and starting a business, Rajaniemi said there’s an important one: “They’re both allowed one miracle.” Watch the video to learn more about this fascinating writer and his unusual career in science.

Tune in next month for Ars Technica Live #5, featuring special guest Leslie Miley, who will talk about diversity (or lack thereof) in Silicon Valley. Cyrus Farivar and Annalee Newitz will interview him live on Longitude on August 17, and we’ll post the video here next week.