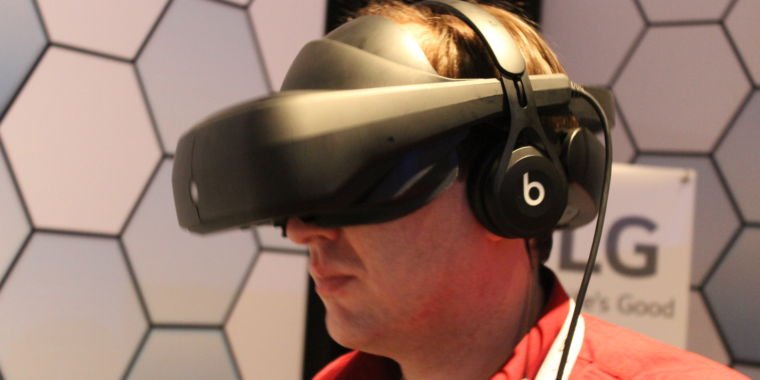 SAN FRANCISCO—For about a year now, Valve’s SteamVR initiative has been synonymous with the HTC Vive headset and the included hand-tracking controllers in terms of hardware. But unlike Oculus’ own homemade hardware, PlayStation VR and the like, SteamVR offers a hardware and API standard that each manufacturer can adhere to with their own headset.

LG recently announced that it is partnering with Valve to become the first company since HTC to join the SteamVR hardware bullpen. At the Game Developers Conference this week, the Korean electronics giant showed off an early prototype headset that already shows some significant improvements over the well-known Vive.

The most noticeable difference is already visible as soon as the LG headset slides over your head. The screen itself is mounted on an adjustable rigid headband that wraps around the back of your skull and balances itself on the top of your forehead, much like the ultra-comfortable PlayStation VR. This distributes the weight of the headset much more comfortably than the small, semi-elastic fabric strap on the Vive (and the display case itself seems much less bulky than the Vive, from a volume perspective). It also makes the screen itself float slightly in front of your face, avoiding the ski goggle-like nose pressure and air-suffocating seal around the eyes of headsets like the Vive and Oculus Rift.

The display case itself is attached to this headband on a dial so you can slide it forward and then over your head to view the real world without taking it off completely (a clever idea that we’d love to see other headset makers post- hast). A single cable runs from the side of the display case to a junction box that plugs directly into the computer, which is ultimately much more comfortable than the three thick wires that run across the top of the skull on the Vive.

LG’s prototype doesn’t have built-in headphones like the Oculus Rift (or the luxury audio belt HTC has started showing off for the Vive). Instead, simple Beats headphones plug into the headset to deliver audio.

The other big difference in this prototype is the resolution. LG’s headset features a single OLED screen, spaced so that each eye sees a 1440 x 1280 pixel spread. That’s an improvement over the 1080 x 1200 OLED screen per eye in the Vive (despite the different aspect ratios, the field of view on LG’s hardware matches that on the Vive at 110 degrees, we’re told). It’s a relatively small increase, but with the screens just inches from your face, every extra pixel counts for delivering extra sharpness.

It’s hard to finalize after a few minutes (and without a side-by-side comparison on the same PC hardware/software), but the visuals in the SteamVR games seemed a bit sharper than I was used to. There was slightly less of the apparent “screen door effect” separation between pixels. That said, it wasn’t such a big difference that I would immediately swear off the Vive’s display for good.

Those two major differences aside, the LG SteamVR experience seemed quite familiar, right down to the menu overlays. The handheld controllers on the LG prototype felt a bit lighter and more fragile than the stock Vive wands (with a slightly sleeker shape), but they have the same basic triggers, buttons and touchpads in the same familiar places. And the controllers and headset were followed by two corner-mounted LG-made Lighthouse tracking boxes that look identical to HTC’s from the outside.

LG says it plans to release its headset by the end of 2017, and isn’t discussing a possible price yet. LG representatives interviewed VR developers for their feedback on possible changes in the final version. Regardless of where and when it lands on the release continuum, it’s nice to see the SteamVR hardware universe expanding beyond a single manufacturer. Hopefully, increased competition will lead to a mutually beneficial race for new features and lower prices.