Hands in the box: new puzzle game Statik does well through VR |Techilink 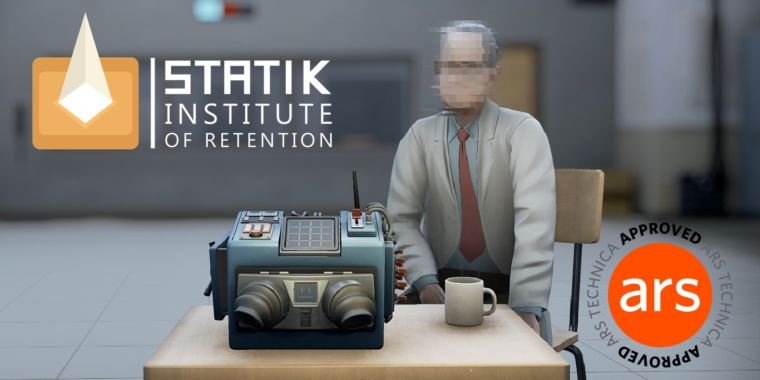 The first thing Statik Institute for Retention proved right is that it leans on every limitation of the PlayStation VR platform.

The last thing Statistics is that it turns those limitations into a bizarre, brilliant rumination about our relationship with computers and games – in a way that only brilliant sci-fi can deliver.

Along the way, the PlayStation VR game reveals its share of successes and failures, but all these things make this VR debut from Swedish developer Tarsier Studios land on PSVR as the platform’s most immersive sit-down experience to date.

You start the game with a PlayStation 4 controller, but within seconds of loading you feel like your hands are in a box. It’s a crazy thrill, fueled by the game’s premise: you’re in an apparent research institute, stuck in a chair, and your arms and hands are tracked in your VR field of view (because the PSVR can track controllers).

Only, you don’t see your hands. Instead, you see a strange box covered with dials, buttons, wires and other graphics, and your hands are clamped inside. Conveniently, your on-screen anatomy, including arms and wrists, matches how your real hands hold a controller. As you try to understand this institution, you realize that every tap on the different parts of the PlayStation 4 controller – buttons, joysticks, triggers – causes different things to happen on this box, your hands are trapped in it. What does each press of the button do? The lone man in the room, a strange man named Dr. Ingen, won’t tell you. You have to figure it out. Perhaps your joystick will turn a knob, move a slider, or open and close a panel. Maybe your buttons activate something on the box – or something in the room you’re in.

The goal in this first room and the other rooms you come across is to figure out how to “solve” each room’s box. And that’s all you really do in Statistics; you never get out of your chair to explore your world or do other things with your hands. Still, that’s okay. Each box has its own strikingly different rules and logic, and, for the most part, Statistics manages to reveal to players a different logical language for each of its puzzles in countless interesting ways. Tapping the button and pushing the joystick will never do the same for multiple boxes. For example, if you see an alphabet-related puzzle once, you can be sure that you will never see another alphabet-related puzzle again.

Each puzzle box contains a series of interlocking puzzles that flow back and forth between each other. Revealing a single one might cause a spoiler domino, so I’m staying here mom. The same goes even for explaining why the game is so suitable for VR. At first glance I thought that StatisticsThe challenges can be neatly transformed into a traditional television, requiring you to watch the TV while tracking the movements of your game controller. But not too long into puzzle solving, I realized how important it is to keep your puzzle boxes right in front of your face, and I also discovered how important the sense of presence plays in solving some puzzles.

I will confirm that I encountered painful glitches in the game logic about three times. A puzzle solution required a logical scope beyond what made sense in the game world. In one instance, I sat for 15 minutes, incredibly frustrated by a single dead-in-my-track obstacle. This kind of frustration only feels more intense when you’re wearing a bulky VR headset. If you’re concerned that puzzle frustration will be too much to bear while stuck in VR, proceed with caution. A few puzzle moments were also cakewalks, though I liked those as palate cleansers among the memorable toughs.

You must see this – and help me play it

In both good and bad news, Statistics does not wear out its welcome, because it is quite short. Maybe I’m just a genius genius, but I beat the nine-puzzle campaign in under two hours. The game also doesn’t look like it was built for additional puzzle rooms fed through DLC.

While I’d love to be proven wrong, I had to settle for a very strange consolation prize: a substantial co-op mode that isn’t even advertised in the game. Knowing this mode almost feels like you’re in a secret club as you have to connect a smart device to your game via the PlayStation app – something I’d never installed – and on the “second screen” – function should tap without any prompting from the game.

I have no idea why Tarsier isn’t telling players about this mode, because it’s staggeringly good. Remember the split screen game Keep talking and nobody explodesthen add Statistics‘s brand of clever puzzle solutions and control options from scratch, and you’ve got this one-hour campaign. Three of the puzzles from the solo campaign return here, but they’re remixed with more complicated steps, along with the required use of a friend’s second screen. All players will see the VR user’s view, thanks to PSVR’s “screen sharing” feature, but the smartphone user will get exclusive controls and views. The ways Tarsier uses this second screen are secretly really rewarding, and they’re worth plodding through, even if the PlayStation app relies on a slightly shaky HTML5 for its trickery.

At least along the way I got to know a very strange man, Dr. Ingen. Although, oddly enough, this character spent more time trying to get to know me. While solving puzzles, Ingen allows to watch, scratch notes on a notepad and drink coffee loudly. (“I’m going to leave you, well, so alone if you can be in a room with someone else,” he jokes before sinking your teeth into one puzzle.) Between rooms and at other key moments, Ingen interrogates and projects onto strange ways, alternating philosophical wanderings and apparent lies.

Ingen (blurred face and all) spends pretty much everything Statistics at your side; you are also led into his personal, private world a few times. Tarsier’s storytellers walk a fine line between making him equal parts relatable and confusing, and for the most part they get it done. At the end of your time with Dr. Ingen, some mysteries are revealed, others remain vague, and still others remain trapped in their own real puzzle boxes. I absolutely crave this kind of WTF-worthy sci-fi tale from a good puzzle video game, and Ingen’s subtle, macabre demeanor, bolstered by his odd relationship with a helpful, quiet computer, results in a much more mature and intriguing puzzle antagonist than Portalis more lively GladOS.

Despite some “Yup, that wasn’t fun!” logical jumps and short running time, I really liked Statistics. I always felt immersed in its world, thanks to the clever “trapped hands” puzzle boxes and the “research institute” setting. Without ruining the ending, I appreciated how those elements fit into the game’s conclusion. And, man, that co-op surprise.

I will remember it for a long time Statistics as an example of immaculate, interactive art. It is as valuable to its mechanics as its sheer experience. Statistics is a must-buy game for any PSVR install, right next to Resident Evil 7.

verdict: A PSVR you have to buy.