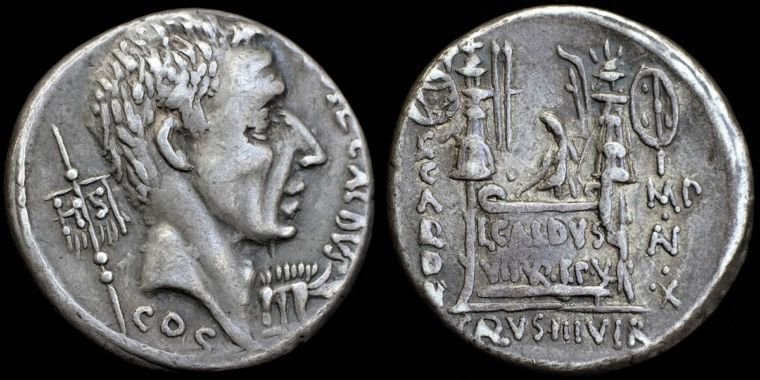 Buried beneath the snow on the surface of Greenland, ancient ice sheets contain lead deposits that originated in mines and foundries in ancient Rome. Fluctuations in the amount of ancient lead pollution reaching Greenland prove to be a remarkably accurate way of tracing the economic impact of wars, plagues and imperial expansion in classical Europe.

Lead may seem unexciting, but the classic world economy ran on it. “The Romans made extensive use of lead for water pipes and other elements of plumbing, weights, soldering clamps between hard stone blocks or columns in architectural structures, sheathing the hulls of some ships, etc.”, classical archaeologist Andrew Wilson of the University of Oxford said Ars.

In a much more direct way, the economy ran on silver: Roman money was minted in silver coins called denarii. When smelting silver, adding lead to the ground ore helps to concentrate the silver. The high temperature melting at about 1,200ºC, along with the process of separating lead from silver afterwards, released a lot of lead into the air over southern Europe in Roman times.

Lead pollution could be an indication of the general state of the Roman economy, but historians would need a detailed account of changes in pollution levels from year to year. That was found 2,500 miles away in the ice sheets of northern Greenland. Paleoclimatologist Joe McConnell of the Desert Research Institute and his colleagues turned to a 423-meter-long ice core taken by the Northern Greenland Ice Core Project.

The core records nearly 2000 years of annual glaciation, from 1100 BCE to 800 CE. Each layer records just under a year’s worth of accumulated ice, which traps other material, such as lead from mines and foundries in Europe. McConnell and his colleagues say they dated the layers with an uncertainty of just one or two years, making it easy to compare lead pollution to historical events.

“The brief timing of known historical events and changes in lead pollution in Greenland certainly argues for a cause-and-effect relationship,” McConnell told Ars.

Of course, at the time, Europe was not the only place where lead production was taking place on an industrial scale. China also had an important lead industry, but computer simulations show that atmospheric currents transport pollutant particles from Europe to northern Greenland much more efficiently than from China, so European pollution dominates the Greenland ice record. And tests of the isotope ratios in the pipeline from a previous drilling project showed that the material was in fact mainly from mines in Spain and elsewhere in Europe.

The ice core shows increasing lead pollution originating in Europe from about 1000 BCE, when the Phoenicians expanded westward from their homeland in the eastern Mediterranean and reached important lead and silver mining areas in Spain. Many of these were in the hands of the city-state (and later the empire) of Carthage. And over the next 1,800 years, lead pollution marked swings in the European economy.

The traces of lead in ancient layers of Arctic ice ended up there because somewhere in Europe a Roman foundry was smelting ore. But it’s eerie to realize that other layers are clean because those miners and foundry workers had suddenly disappeared – dead, on the run or fighting.

McConnell and his colleagues saw a distinctive pattern around wars in Roman history. When conflict came to a mining area, such as during the three Punic Wars between Rome and Carthage, life and work in the region disrupted. That’s evidenced by a year or two of slightly cleaner ice in Greenland, as Europe produced less lead pollution.

For example, with the outbreak of the First Punic War in 264 BCE, the amount of lead in the Greenland ice sheets dropped abruptly. But closer to the last years of the war, production picked up again, as Carthage minted more silver coins to pay his mercenaries.

Drops in wartime production were usually followed by a recovery at the end of the conflict, when people went back to work and started pumping particulate lead back into the atmosphere. After the end of the Second Punic War in 206 BCE, Rome took control of the mining areas of Carthage in Spain, which coincided with a sharp increase in lead pollution in Greenland’s ice core.

Ups and Downs in Ancient Rome

During the crisis of the Roman Republic, a period of wars and political instability from the late second to the middle of the first century BCE (it ended in the rise of the Roman Empire), lead emissions from Europe remained relatively low. But as things stabilized, especially when Rome conquered important mining areas in northern Spain around 16 BCE, Europe began to steadily pump out large amounts of lead that stained the distant ice.

With Rome an empire, lead pollution increased dramatically. The highest lead emissions at any time in ancient times have been recorded in layers of Greenland ice dating to the first century CE, and they remained high until about 160 CE. This coincides with Rome’s consolidation of its imperial rule in the provinces, ushering in the period of political stability and economic prosperity known as the pax romana.

But there were some fluctuations in lead production during the Imperial centuries. We have examples of currencies from different periods in Roman history, and these show that during the waning centuries of the Roman Empire, the percentage of real silver in Roman coins gradually declined.

“Under Augustus and the early Julio-Claudian emperors, up to AD 64 [64 CE], silver denarii were made from effectively 100 percent silver; and [they] were made from virgin metal (not recycled coin),” explains Wilson. In 64 CE, Nero reduced that to 80 percent, and Roman mints began recycling old coins to make new ones instead of relying on newly mined silver.

A sharp decline in lead pollution in Greenland’s ice cores reflects that process. “It seems very likely that the decline in silver production — decreasing mining output? — brought with it the reduction in fineness and the shift to coin recycling,” Wilson said.

From 103-107 CE, under Trajan, the empire briefly returned to producing coins of new metal, coinciding precisely with a spike in lead pollution in Greenland’s ice. When Imperial mints went back to coin recycling, pollution levels dropped again.

And it all came to a halt in 165 CE when a devastating pandemic hit the empire. Today, historians think it was smallpox or measles, but the Romans knew it as the Antonine Plague, and several waves of outbreaks killed as many as five million people before it finally burned out in 193 CE.

The Roman Empire would go on for a few more centuries, but the economy never recovered. Some areas had lost up to a third of their population to the Antonine Plague, leaving the empire with both a smaller miner base and less economic demand for currency. The battered state of the Roman economy is evidenced by the low levels of lead in the ice sheets of the plague years and the five centuries that followed.

The already battered Roman economy took another blow during the Plague of Cyprian from 249 CE to 270 CE, which struck in the midst of a period of political turmoil called the Imperial Crisis. It has reduced lead emissions to the lowest level since 900 BCE. European lead production did not recover until the early Middle Ages, when mining resumed in France and Great Britain.

What does all this mean for our understanding of classical history? It means that there is still an enormous amount of information to be extracted from Greenland’s ice and a lot of work to be done to combine the ice core data with written and archaeological data to produce a more detailed history of the Roman economy.

“One of our objectives here was to document how closely changes in Greenland’s lead pollution (and thus European emissions) reflected known historical events, particularly with the exact dates associated with them,” McConnell told Ars. “Now that we have confirmed this, classical and economic historians can interpret the ongoing and well-dated Greenland pollution record in much more detail.”