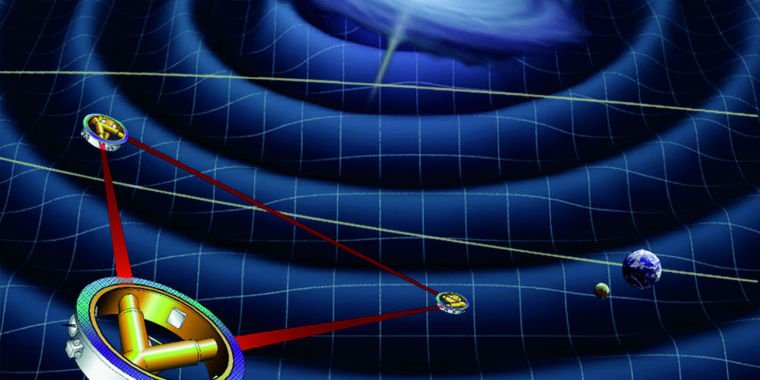 Until a year ago, gravitational waves were a theoretical construct, a consequence of the theory of relativity. We had circumstantial evidence that they were real, because energy was being lost from binary star systems, just as Einstein predicted. But observing them directly required the improved Laser Interferometer Gravitational-Wave Observatory (LIGO). Once we discovered them, however, astrophysicists were quick to point out that they gave us a completely new window through which to see the most energetic events in the Universe.

As a sign of how seriously that claim is taken, European physicists have just opened a new detector. It’s called VIRGO and will be combined with LIGO to give us a better idea of ​​where events are happening. And Virgo is not the end. Researchers used the meeting of the American Association for the Advancement of Science to discuss next generations of gravitational wave detectors, as well as the continuation of what is now a decades-long experiment that has so far remained empty.

VIRGO and LIGO work on the basis of the same physical principles. Laser light is sent back and forth between mirrors at the ends of two perpendicular 4 km long arms. After a sufficient number of trips, they are recombined in such a way that small changes in the distance between the mirrors can be detected. Transient gravitational waves ripple the fabric of space, causing that distance to change infinitely.

How small is the movement? According to Nobel laureate Takaaki Kajita, a strong gravitational wave will change the Earth-Sun distance by 10-8 centimeters. So the laser light has to bounce between the mirrors many, many times (about 280 to be exact) to increase the effective distance traveled. And even then, random noise dominates the acquired data.

After winning the Nobel Prize for his role in creating an underground neutrino observatory, Kajita was on hand to talk about Japan’s work on moving gravitational wave detectors underground. The KAGRA gravitational wave observatory is being built in the same mine (Kamioka) as the neutrino detector (called Super-Kamiokande). While the KAGRA will have shorter arms than LIGO — 3 km instead of 4 km — Kajita said moving it underground reduces seismic noise by a factor of 100.

But KAGRA also does something about extra noise from the most important parts: the mirrors that send the light back and forth repeatedly along each arm. In KAGRA, these are sapphire mirrors cooled to 20 Kelvin, which have to remove many thermal and vibrational noise sources. It is expected that KAGRA will be operational in a few years. That will provide four active observatories, which will provide detailed positioning information about the source of any gravitational waves. That, Kajita said, will enable follow-up observations using light, which should provide a more complete picture of events such as neutron star mergers.

Of course it’s still possible to make longer arms, and there are plans to make them much, much bigger: about a million miles apart. That is of course not possible on Earth, which eliminates the problem of seismic noise. Stefano Vitale of the LISA project said arms of this size would also enable the detection of gravitational waves at much longer frequencies than LIGO.

This has a number of important advantages. For example, the two merging black holes detected by LIGO started producing gravitational waves that gradually increased in frequency as they got closer to each other. LIGO took only a few seconds of starting value right before the black holes merged. LISA, Vitale said, would have noticed the system more than a year before LIGO saw anything, meaning we could have followed the black holes’ death spiral.

Larger black holes, such as the supermassive holes at the center of galaxies, also produce low-frequency gravitational waves as they spiral toward fusion. Since this should only happen through galaxy mergers, Vitale said LISA would allow us to build “a natural history of the Universe,” by looking at how the dynamics of mergers changed over time. We could also track a small black hole orbiting a supermassive hole 10,000 times as it spirals inward, allowing us to map the event horizon.

All this means that LISA can detect many resources, but will see many at the same time. I asked Vitale how you would separate these overlapping signals. His reaction? “Very carefully!” He went on to say that simulations indicated we would be able to pick apart any signal that was at least 20 times more noticeable than background noise.

So, what would it take to get LISA to work? The plan for LISA is to set up three spacecraft in a triangular configuration, each sending lasers to the other two. At these distances, even lasers scatter considerably, so the spacecraft would need to have two telescopes to focus the light on the hardware. However, the big challenge comes from the fact that we can’t stabilize spacecraft enough for our needs – they constantly collide with photons, particles and dust, causing them to crowd a bit. Instead, the spacecraft will act as a shell and shield for hardware floating freely inside. The craft will maneuver enough to avoid pushing the experimental hardware while absorbing any bumps from the environment.

Naturally, this requires some demanding hardware requirements. So the ESA has already started the preliminary tests via the LISA Pathfinder mission. Even with the test hardware, stability was close to what would be required for the full LISA mission. Two rounds of tweaks in response to the data they’ve gathered means it’s now working better than we would need to get LISA to work. Sadly, the earliest launch date isn’t until nearly 2030.

Who needs a laser?

(Everyone except the sharks, of course.)

Of course, for some people, a million miles isn’t enough. As you get bigger you get even longer frequencies, some of which enter the territory where you can test some versions of string theory. However, at those distances, we can’t make a laser that is bright enough, and we can’t get a mirror out anyway. So we rely on a light source created by nature: pulsars.

Pulsars are rotating neutron stars that sweep their magnetic poles through the Earth’s location, bathing in a burst of radio waves in the process. The timing of their rotations is ridiculously accurate. Sarah Spolaor of the National Radio Astronomy Observatory said, “It’s an incredible measurement error — that really gets me excited,” as she showed a slide full of zeros. Although I didn’t get the exact number, the variations of other pulsars have been measured up to 10-13Hz.

As with LIGO, a gravitational wave passing between the pulsar and Earth would expand and contract the space between them, shifting the timing slightly. By observing two pulsars in different directions from Earth, the effects of gravitational waves could be detected. The idea is so simple that astronomers have developed a whole series of correctly placed pulsars and have been making regular observations for decades. However, this has yielded nothing.

But that’s a good sort of nothing. The pulsar timing arrays should be able to pick up merging supermassive black holes well in advance of LIGO or LISA, when they are still about a dozen light-days apart. The number we would detect will be proportional to how long two supermassive black holes spend within this distance before merging. Nondetection, Spolaor said, means they don’t spend as much time, which means they must lose energy and quickly spiral inward. Which in turn means they lose energy through one or more mechanisms in addition to gravitational wave blasting. Which tells us that after mergers there must be something interesting going on in galactic nuclei.

Either that, or an alternative theory of gravity is in effect.

While the session was intended to generate interest in moving beyond LIGO (and, from my perspective, it succeeded admirably), LIGO is not done yet. The LSU spokesperson, Gabriela González, was in the audience. She said that during its second operational run, LIGO had already activated two alerts for astronomers to tell them there was something they might want to point their telescopes at. More details will have to await the analysis of the full dataset obtained from run two.