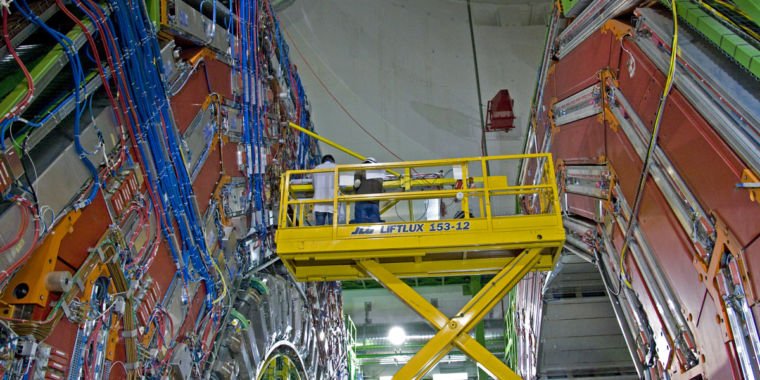 I always tell my students that LIGO (Laser Interferometer Gravitational Wave Observatory) is one of the most amazing achievements of mankind. In short, a group of people set out to measure the immeasurable. They methodically overcame any source of noise that engulfed the signal until gravitational waves were found. Gradually, LIGO scientists have created the most sensitive instrument in existence.

And once you have a nice sensor, everyone will want to use it for their experiments. The newest group in line are the particle physicists, who think LIGO’s excellent sensitivity could make its equipment a good detector for particles.

LIGO knows when you rock

Before we get into how to turn LIGO into a particle physics detector, let’s take a quick look at how LIGO works.

LIGO is a giant interferometer: a laser beam is split in two by a partially reflecting mirror. The two rays of light are sent to distant mirrors. The rays of light reflect off the mirrors and return where they came from. In the partially reflective mirror, the two light rays are recombined. Light is a wave, meaning it has an amplitude that fluctuates between a positive and a negative value. When the two waves are recombined, the result depends on their amplitude at the time they are recombined (this is called interference – hence “interferometry”).

If the two waves combine when in phase, then the waves always have the same amplitude value at the partially reflecting mirror. The light wave exiting the interferometer in this case will be bright. We call this ‘constructive interference’. But if the two waves combine so that they are opposite, then the amplitudes of both waves are equal but opposite in sign. In this case, the result is darkness: no light comes out of the interferometer.

The factor that determines how the waves add up is the difference in the distance they have traveled. If the interferometer is set up so that no light comes out of the interferometer under normal conditions, a slight movement of one mirror will result in a sudden light in the darkness.

This allows LIGO to be sensitive to mirror displacements on the order of 10-19 meters (for comparison, the diameter of a proton is 10-15 meters). Even small test interferometers built to test LIGO technologies have similar displacement sensitivities.

Interferometers are thus spectacular displacement sensors. How do we turn that into a particle detector?

The basic idea is very simple. A beam of high-energy particles is shot into the back of one of the mirrors. The force exerted by the particles colliding with the mirror material moves the mirror and gives off a signal. Basically what you want is a particle beam that goes on and off at about a thousand cycles per second, or 1 kHz. The result is that the mirror starts to vibrate at 1 kHz, where the amplitude of the kHz is proportional to the energy provided by the particle collisions occurring in the mirror.

The researchers show that a small and relatively inexpensive interferometer should have a useful sensitivity to particle collisions. A proof-of-principle experiment should not be out of reach.

The big question is what do we get out of this that we don’t get out of existing particle physics experiments, and that’s where it gets a little fuzzy. One of the more concrete suggestions is that these measurements provide more accurate stopping power measurements – an important parameter in choosing radiation therapy doses for cancer treatment.

Furthermore, the main idea seems to be that this offers a new window into particle physics. In particular, there are some types of scattering that are difficult to detect in traditional particle detectors. The article isn’t really explicit about this, but I think what they mean is taking a more direct look at what are called “missing mass calculations.”

There may be several more baby LIGOs installed in small particle accelerators around the world. Their measurements will be used in calculations for the large colliders and help in the search for particles.

Therefore, everyone should have at least one interferometer.