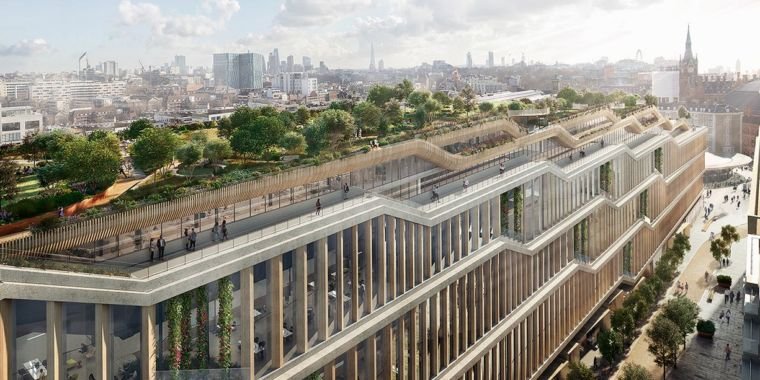 What has 11 stories, is taller than the shard is tall, and is one of the most beautiful buildings the world has ever seen? Google’s new UK headquarters near Kings Cross in London.

Google finally submitted planning permission for the massive new building to the City of Camden a few days ago, and the application comes with a huge wealth of concept images and floor plans. I’ll go through the main features of the site (which can still be rejected by the municipality), but otherwise I’ll let the images speak for themselves.

Some aerial shots of the relative position of Google’s new London headquarters to Kings Cross station.

Google’s new UK headquarters will be a mixed-use development in Kings Cross Central, a huge plot of land (~67 acres) behind Kings Cross station that used to be warehouses, undergrowth and other railway-related things. The new construction will consist of commercial (A1) real estate on the ground floor, with up to 10 floors of Google space above.

The next eight floors are mostly open-plan offices, which will presumably provide enough space for the few thousand Googlers currently scattered across several London buildings. The top two floors have lots of fun stuff like massage rooms, staff cafes, multi-use games and a swimming pool.

And then of course a roof garden on top of the 330 meter long building that surpasses all other roof gardens. There is a lawn, wooden decking, a wild meadow, large trees and even a running track. There are also a handful of photovoltaic solar cells, but not enough to power the building. Because Google’s new building is taller than many skyscrapers (the Shard is 310 meters high), some are calling it a landscape scraper.

Like most modern buildings, the new Google headquarters will use floor-to-ceiling windows to let in as much light as possible, but to ensure computer screens are still visible, the building is surrounded by giant wooden shutters that follow the sun. and the brilliance.

The whole thing is, for some unknown but divinely inspired reason, kicked. The front of the building is significantly lower than the back; the roof garden looks like it has at least five different levels. The external effect is amazing – it makes the building look so much more alive. Internally I can imagine there will be a lot of slopes.

To me, Google’s new building in London looks like a giant, modern reinvention of the Parthenon. Or, if you squint a little, like a computer heatsink with a pair of heatpipes. Of course, the final building may not look that nice, but still: I don’t think I’ve ever been so enthusiastic about concept images before.

Construction is slated to begin in 2018, assuming the Camden council clears things up. The building was designed by Bjarke Ingels Group (BIG) and Heatherwick Studios, the same two companies working on Google’s new headquarters in Silicon Valley. Architect’s Journal reports that the London building will cost approximately £1 billion to construct and will have a total floor area of ​​80,819 square metres; nearly a million square feet.