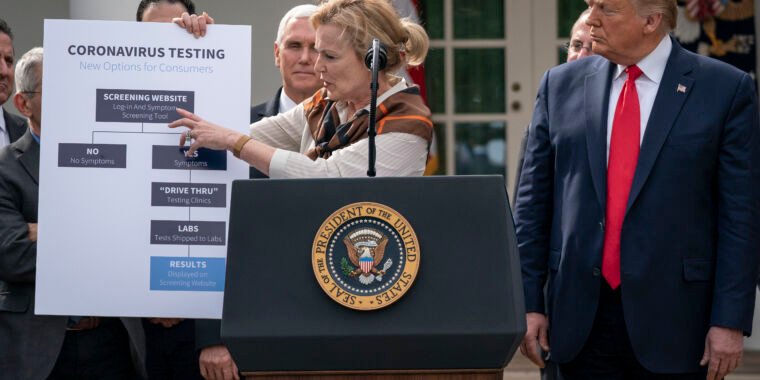 Over the weekend, details emerged about how two Alphabet companies will contribute to the government’s efforts to contain the spread of the novel coronavirus. The news came after the government’s announcement on Friday that Google would play a pivotal role in coordinating extensive testing for infections — an announcement that seemed to catch the company off guard.

President Trump and his Coronavirus coordinator, Deborah Birx, both indicated that comprehensive testing would rely on a Google web portal that would collect information about symptoms and exposure and recommend testing if necessary. If so, the software would direct people to a nearby drive-through testing facility with adequate capacity. But within a few hours, the company issued a statement indicating that it was another company within Google’s parent company, Alphabet, that would provide a portal. That company, Verily, indicated that the portal was in early stages and planned to test it in a single area in the future.

According to reports of the confusion, Google had asked for volunteers to help with problems related to the coronavirus until Thursday, the day before the White House announcement. There is no indication that it had any specific plans for the volunteers at the time. Meanwhile, work had indeed begun on a coronavirus project, but it was only planned for the Bay Area in California and wasn’t even ready for testing — in part because so little virus testing infrastructure exists.

Apparently, these facts were confused and inflated by senior members of the Trump administration, and the inflated version sparked enough enthusiasm that it played a central role in Friday’s announcement.

Since then, both companies have changed plans and made new announcements. In a blog post from Verily, it announced that a web portal for California residents would go live Monday, and it appears to match the description of an electronic triage that will determine who should be tested and coordinate their testing. However, the company says some features may not be ready tomorrow: “The program is in its early stages and we will take time to review operations at pilot sites in the Bay Area before rolling it out to other locations.”

Google, for its part, announced that it would partner with the federal government to create another web service, one that would provide an information center but not coordinate testing. In an accompanying blog post, Sundar Pichai, the CEO of Google and Alphabet, elaborated on the project and placed it in the context of the company’s other efforts. In addition to the information-focused website, the company will post some information on its homepage, increase the moderation of misinformation on YouTube and adapt maps to better cope with the closure of many businesses and services in response to the pandemic.

These are all welcome efforts. But it’s clear that even if US testing capacity increases as dramatically as promised, we’ll have to wait for a website that can ensure the expanded capacity is tailored to the people who need it most.

At today’s press conference, in which he declared the novel coronavirus a national emergency, President Trump announced that Google was developing software that would be central to the US containment strategy. Trump, along with Dr. Deborah Birx, the government’s Coronavirus Response Coordinator, said Google’s web portal would be at the center of the process to help US residents take advantage of a promised expansion of the country’s testing capacity.

Two hours later, however, Google Communications felt compelled to issue a statement saying that almost everything about this is either not quite right or very wrong. The portal is being done by another company and isn’t even ready for testing in the only location it’s planned for: the Bay Area in California.

Google’s role in the process was mentioned twice, first by Trump himself, who said: “Google helps develop a website. It will happen very quickly – unlike websites of the past – to determine whether a test justified, and to facilitate testing at a nearby suitable location.” He further claimed that Google currently had 1,700 engineers on the project.

But it wasn’t just Trump who was out of control. dr. Birx was brought in to work out the government’s planned response and said Google would play a central role in it. “We also wanted to announce this new approach to testing,” she said, “which will begin on this screening website facilitated by Google.” The website would supposedly ask users about risk factors and symptoms, determine whether a test is warranted, and then refer them to a nearby drive-through testing center.

Problems start with the fact that Google isn’t involved in this. Instead, another Alphabet company, Verily, is working on a portal. This makes more sense, as Verily focuses on medically oriented computing, both for analyzing data for major healthcare providers and for providing services and hardware for individual patients. And at least it has the same parent company as Google, which presumably explains the confusion about who builds the software.

But the verily statement (which used to be published by Google Communications) indicates that there are a number of other issues in the plans presented by the government today. The statement reads in full:

We are developing a tool to help individuals triage for Covid-19 tests. Verily is in the early stages of development and plans to roll out testing in the Bay Area, with hopes of expanding more widely over time. We appreciate the support of government officials and industry partners and thank the Google engineers who volunteered to be part of this effort.

So while there may be some Google engineers volunteering to help with the project, it’s being developed by a company that two years ago had a total workforce that was less than a third of the 1,700 engineers claimed by Trump. . The website isn’t even ready to use for a single region in a single state, let alone become a central part of the government’s strategy to allocate the millions of tests that would be available in the near future.

At the time of this report, the administration had not made it clear what its actual plan is. Given that key figures in drafting this plan acted as if this portal was ready for use only a few hours ago, it may take some time to develop one.