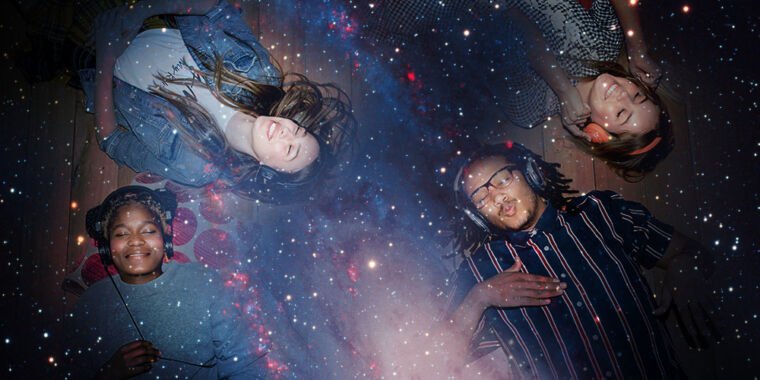 In some ways, podcasts are among the most quarantine-proof forms of entertainment right now. Perhaps some larger hosts have been forced to move their mics and wall coverings into a home office, or are now hiding in closets for better sound quality (but not as a fearful response to terrifying and confusing news headlines).

But that doesn’t mean that all podcasts currently in production are a perfect fit for a geek’s listening diet, whether they’re too shallow or too bleak. In my case, I look for at least a mix of emotional support, comfort and normalcy in my regular podcast library. That’s why I recommend the five podcasts below as my favorites if you’re looking for that much-needed connection to the outside world. (These are in addition to other podcasts I’ve featured on Ars before.)

My latest selections tell uplifting stories; they have friends who talk about things they love; and while they had to adapt to protect their hosts from COVID-19, they have maintained the joy and optimism that drew me to them in the first place. All of these podcasts have new, regularly updated episodes in common, and they’re all about research and science.

A road with words

Let’s start with a podcast that literally helps me get out of bed. A Way with Words is a cheerful dial-up show about how people use language. Hosts Grant Barrett and Martha Barnette answer questions from listeners from across North America about foreign words and phrases. Callers can be anyone from any background, from recent immigrants seeking a better understanding of the nuances of English prepositions, to a child pondering the distinction between “barely” and “almost,” to someone from one state who just moved to another and found that no one in their new hometown knows a phrase they grew up with. “They looked at me like I had two heads” is a common sentiment among A Way with Words callers, but Grant and Martha skillfully dispel that sense of alienation with good humor and meticulously researched facts about the regional distribution of words.

Between callers, Grant and Martha exchange fun language facts they’ve learned recently. These include a recent story about Hungarian popular humor surrounding the “aggressive piglet joke” and a talk about what members of hobby groups call themselves, including “AFoL” for an adult Lego fan. They also review books, provide occasional writing advice, and solve brain teasers presented by co-host John Chaneski. A Way with Words overflows with the energy of morning radio and it’s always a joy to wake up on Monday mornings with a new episode (or a rerun from the extensive archive) on my phone to accompany me through the day.

Like A Way with Words, Lexitecture is full of deep dives into the complicated history of words and phrases, albeit with an arguably more focused approach. The hosts, longtime friends Ryan and Amy, each present one word per episode that they’ve been thinking about lately, along with what they’ve learned about it from the Oxford English Dictionary, Etymonline, and more specialized linguistic resources. They follow their chosen words on winding historical journeys, puzzling up the stories of how the meaning of the words has changed since they were introduced in English.

The best moments in Lexitecture are when Amy and Ryan discover that their words are distant etymological cousins, or discover how their own linguistic experiences (Ryan is Canadian; Amy is Scottish) influence their expectations of a word’s history, or marvel at how the juxtaposition of two independently chosen words create a perfect episode title. This includes recent episodes “Inertia Device” (where we learn that a “device” was originally something that was invented) and “Swear Method” (which gives us a hilarious title alongside the fascinating story of how “swear” evolved from a word that is associated with making promises to a word associated with taboo words).

Lexitecture invites fans to get very serious with the presenters, inviting them to comment on episodes on social media or asking them to suggest new words for the occasional listener Wordstravaganza. I appreciate that bold attitude towards their rapport with fans, especially now.

99% Invisible is a long-running Radiotopia podcast about the design of everyday things and cultural artifacts, from the history of toilet paper and department store mannequins to the architecture of shade and the economy of chili peppers. Host Roman Mars and a rotating cast of writers and producers examine the subtle details of design choices listeners may never have noticed before, as well as the historical motivations and social implications of those choices. This is an occasional heavier podcast, dealing with issues of social and economic inequality related to design, such as in their recent episode on the effects of COVID-19 on urban homeless communities. But overall, it’s a great listening experience for times when you need something to focus on.

Recent 99% Invisible episodes have dealt with issues related to the pandemic, but the podcast has also just begun a second season of the “Articles of Interest” miniseries, in which producer Avery Trufelman explores the history of fashion design. The show also has a new book, The 99% Invisible Cityavailable for pre-order.

Is news from Earth becoming depressing? Let’s learn about cool things in space instead. (You know, if you don’t read or watch Ars Technica’s own coverage on the topic.)

In the Royal Astronomical Society’s Supermassive Podcast, launched earlier this year to celebrate the 200th anniversary of the founding of the RAS, science journalist Izzie Clarke and Oxford astrophysicist Becky Smethurst discuss astronomical topics from space weather (including which planets next to Earth have aurorae) to accessible explanations of Einstein’s theory of relativity. In between, they interview other space scientists about their research and inform viewers in the Northern Hemisphere about exciting things to see in their own night sky, including the recent Lyrid meteor shower. This month’s episode is about exoplanets.

If you need a break from the mundane that doesn’t go as far as deep space, try the Smithsonian Institution’s Sidedoor. Host Lizzie Peabody takes listeners behind the scenes of the Smithsonian museums, using exhibits and interviewing curators to tell gripping stories of science and history. Standout episodes cover the history of American home-brewed beer, the Apollo 12 mission (released on the 50th anniversary of Apollo 12), and the awe-inspiring migration of monarch butterflies. If you like science and history podcasts, you will fall in love with Sidedoor.

Podcasts are a great way to stay motivated and keep yourself company in a scary and frustrating world. We’d love to hear about your favorite episodes of these podcasts and what other podcasts help you keep going.