Giant atom hides its neighbors under a single-electron skirt | Techilink 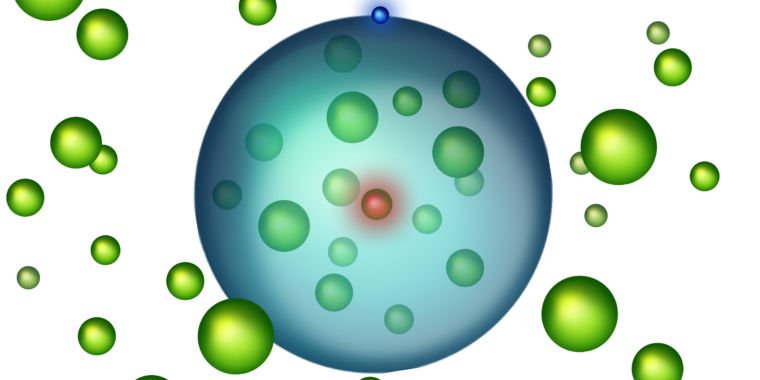 You may be familiar with matryoshka dolls: nested sets of painted figurines that fit inside painted figurines. In the case of wooden dolls, the concept is quite simple: hollow out a large piece and place smaller pieces in it. You might think that doing the same thing with atoms is rather difficult. Yes, atoms are mostly space, but they are kind of hard to hollow out. And convincing another atom to enter the void (and make itself smaller) seems an impossible task.

Yet this is kind of what a group of researchers has done. They created a multitude of very cold atoms; within that crowd they took a single atom and convinced one of the electrons to orbit at a very great distance. Pairs of atoms more or less fell into the gap between that electron and its nucleus. And there they were, trapped between an outer shell of a rapidly spinning electron and a hard wall of the inner electrons and nucleus. It’s not quite a matryoshka doll – all the trapped atoms are together in the gap, not in each other – but it’s an impressive approximation.

So, how did the researchers approach this feat of atomic woodwork? To get to grips with that, we need to introduce three concepts: the Bose Einstein condensate, which makes up the crowd of very cold atoms; a polaron, the mechanism that traps the atoms in the doll’s outer shell; and finally Rydberg atoms, a way of making an atom very large and very empty.

I don’t know what a Rydberg atom is, but I’ll take two

To put the above in technical terms, the researchers took a nice relaxed Bose Einstein condensate, dropped a Rydberg atom into it, and watched the whole thing bounce around excitedly.

A Rydberg atom is an ordinary atom with one electron that has a lot of energy. Negatively charged electrons are held by an atom because they are attracted to the positively charged nucleus. The trapped electrons are all stacked in order of energy (I’m ignoring all the other properties, which make the stack more interesting). In principle, this stacking is the same for all atoms: there are infinitely many possible energies, all of which are still below zero, and an energy above zero indicates that the electron is no longer bound to the atom. The trick is that as the gap between each layer in the stack gets smaller and smaller, the more energy you have.

A laser of just the right color can excite an electron from somewhere near the bottom (so maybe around the fifth layer in the stack) to about the 30th to 150th layer in the stack. These electrons are hardly bonded to the atom. Their energy is so high that they have circular orbits, almost like planets, far away from the core. These Rydberg atoms can have a radius as large as a micrometer, about a thousand times larger than their normal size.

The space between that excited electron and the rest of the electrons is empty, but normally other atoms don’t fall into the gap. They can pass through it, or their passage can cause the electron to fall back to its normal position in the stack. However, they usually don’t stay cooped up indoors with everything nice and stable. To get that, you need atoms in a special state, a Bose Einstein condensate.

Let’s stay on the same wavelength

A Bose Einstein condensate is a special form of matter based on a quirk of quantum mechanics. In the quantum world, you can be a boson or a fermion. Almost everything around us is made up of fermions: electrons, protons, and neutrons are all fermions. Particles such as photons, on the other hand, are bosons. The key difference between fermions and bosons is how they behave when brought close together.

If you brace yourself and try to see inside the mind of a physicist, you will usually “????” find. covered with a patina of useful laziness.

To understand the difference between fermions and bosons, we need to think about the wave-like properties of particles. The wave holds the odds of finding a particle, and as the particles approach each other, the waves of the two particles begin to overlap. That means the probability of finding both particles in the overlap region is proportional to the sum of the two waves there. For fermions, the size of the wave in the overlap region decreases as the particles approach each other; instead, the wave grows in the non-overlapping area. This means that the two particles avoid each other.

For bosons, the exact opposite happens: the sum of the waves in the overlapping region increases and the particles seem to race together in a fierce embrace. When a large group of bosons come together, with some encouragement, they can all end up in exactly the same quantum state and behave as if they were a single particle. A nice analogy might be going to a concert. As soon as the music gets going and the audience warms up, they form one group: the concertgoers give up their individuality to lose themselves in the music.

When atoms are bosons (fermions, which make up atoms, can combine to form a boson), they can cool into a cloud of atoms that holds itself together. Although the atoms are not physically close to each other, they will not repel each other if they get close.

These are atoms that can sit quietly within the radius of a Rydberg atom without necessarily disturbing it. But that’s not enough to trap them in the Rydberg atom. To do that, we need to think about how the atoms from the condensate react to the outermost electron. To understand that, we need to delve into the filthy world of quasiparticles.

Not all attractions are deadly

If you brace yourself and try to see inside the mind of a physicist, you will usually “????” find. covered with a patina of useful laziness. There is no better demonstration of this than the world of quasiparticles. Quasiparticles are not particles in the normal sense of the word, but they are groups of “things” that behave together as a single entity. Within this pantheon of fantasy particles we will find the polaron (the one with dark hair, just to the left of the evil exciton).

Imagine a solid crystal. All atoms are spaced at regular intervals and everything is electrically neutral. Now we drop an electron into the crystal. The electrons around the atoms recoil from the invader, leaving a slight positive charge around it. This movement effectively shields the rest of the crystal from the intrusive negative charge of the new electron.

Now, as the electron moves, the atoms it leaves behind relax, while the atoms in front of it begin to deform themselves to maintain the screen. The relaxation and distortion generate sound waves that travel with the electron. So we end up with an electron, traveling in a shell of sound waves, all this acting as a single entity that we call a polaron.

That’s a free polaron. But there are also trapped polarons. Imagine the same situation: an electron falls into a neutral crystal. The electrons around the atoms recoil and surround the electron with positive charges. The electron slows down until it can only vibrate back and forth in place. As it vibrates, the surrounding atoms also vibrate and emit sound waves through the crystal. Again, it looks like a single particle made up of a charge and sound waves, but bound to a particular point in the crystal.

Loosen the bolts and examine the nuts

So the process involved in making atoms-in-atoms looks something like this. The researchers take a gas of atoms and cool them down until they form a Bose Einstein condensate. At this point, the atoms are so cold that they basically don’t move and are about 80 nanometers apart. Then the researchers shine a very short beam of ultraviolet light through the condensate. The color and intensity of this light is chosen so as to most likely form a single Rydberg atom.

To the surrounding atoms, the spinning electron looks like a lone electron. The largest Rydberg atoms have electron orbits on the order of a micrometer in diameter, meaning there are about 160 atoms in the orbit when the Rydberg atom is formed. The trapped atoms rearrange their electrons so that a slightly positive charge is toward the electron and a slightly negative charge is toward the nucleus. As the electron spins, these atoms physically vibrate and emit sound waves into the rest of the Bose Einstein condensate.

You captured a polaron in a Rydberg atom. All in a Bose Einstein condensate.

For small Rydberg atoms, it is possible to see how the polarons are bonded to the atom. For example, polarons form pairs: both polarons are bonded to the Rydberg atom, but at the same time they push each other around, forming a single unit. This also works for groups of three and five. But as the number of trapped polarons increases, these individual groups smear as all the polarons push each other around.

It’s easy to be quite underwhelmed and cynical when you read scientific articles on a daily basis. Many results are comparable or are (useful) extensions of previous work. With enough coffee you can appreciate the craftsmanship and the new knowledge without really getting the blood flowing. This research is quite the opposite: the new knowledge and skills come second to the “they did what?” factor. Now I have to lie down.