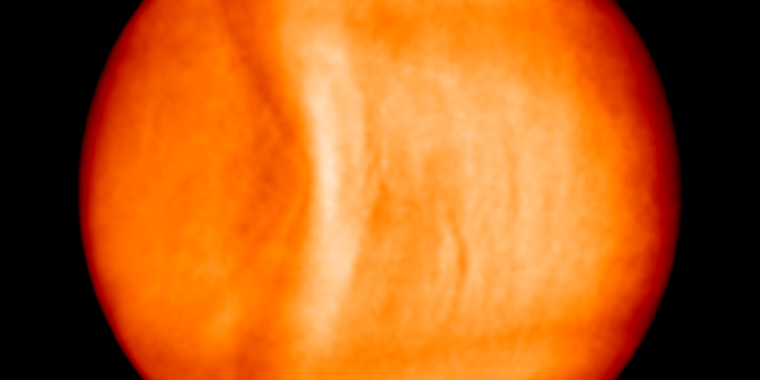 The Akatsuki spacecraft arrived in orbit around Venus in December 2015 and quickly captured something very strange: an atmospheric disturbance in the form of an arc. The feature is huge, stretching from the planet’s north pole to the south (10,000 kilometers or 6,200 miles in total), and it’s visible in both infrared and (faint) ultraviolet light.

Images from this mission were recently released and researchers have had a chance to look at them and do some science. They have concluded that the mysterious structure is likely a gravitational wave generated by mountains on the surface and propagating in the atmosphere. It’s “the only reasonable interpretation,” according to a new article on the feature.

Gravitational waves – not to be confused with gravity waves, the kind recently observed by LIGO, are waves in a fluid, such as water or air, caused by gravity. When part of the fluid moves upwards, gravity tries to correct it and restore equilibrium, a process that creates waves. Earth’s atmosphere also has gravitational waves created by the influence of mountains, which move air upwards.

But gravitational waves on Earth ultimately do not produce planetary features. So there was no reason to expect Venus to have anything of this scale.

One of the other notable features of this structure is its movement, or lack thereof. Venus has an extremely thick atmosphere and most of the disturbances should be carried along with the motion of the atmosphere, which is 100 meters per second, significantly faster than the planet’s rotation. Some functions might go a bit faster or slower, but should be somewhere in the same ballpark. Not the arcuate structure, which appeared to be stationary relative to the planet’s surface, ignoring the rotation of the atmosphere.

Akatsuki remained in position to observe the structure for a total of five days, and the structure generally maintained its position throughout that period. Similar arcuate features have been seen in previous UV images of Venus, but they lacked the remarkable stationary nature of the new one, as well as its brightness.

The wave is estimated to be located over Aphrodite Terra, one of the planet’s continents, near the western slope of the Western Highlands.

The researchers ran a simulation to test whether the mountains of Venus would produce such a thing, and their atmospheric simulation yielded a property very similar to that observed by Akatsuki. “The similarity of the model result to the observation is remarkable,” the researchers write in their paper.

It is worth noting that this simulation is preliminary. The authors point out that more in-depth simulations need to be done to find out if a feature like this would appear reliably.

The giant wave challenges conventional assumptions about how Venus’ atmosphere works. To begin with, we thought that convection that happens throughout the atmosphere should break up such gravitational waves before they get that big. For another, there must be a critical height in the atmosphere at which the upwardly propagating wave breaks up, preventing the feature from being that high. The breakup is said to be caused by the planet’s surface winds, and it’s not clear why they didn’t.

Future work could further investigate this strange phenomenon and its role in the Venusian atmosphere. This observation has shown not only that stationary gravitational waves can exist, but that they can become extraordinarily large; this one may be the largest ever observed in the solar system.