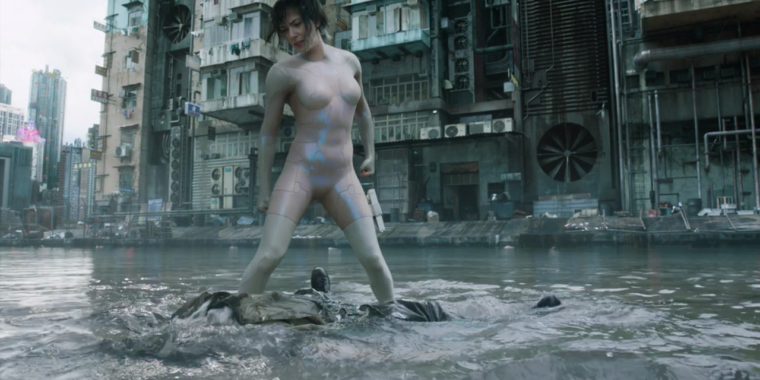 The producers of the new . of this week Ghost in the shell movie really has to believe that no one has seen the source material. That’s the only way to enjoy this live-action reboot: you’re not aware of the original 1995 anime movie or the predecessor to the manga comic book. Scarlett Johansson runs around futuristic, CGI-filled worlds in a form-fitting outfit. She shoots guns, kicks faces and beats the bad guys. Not bad.

But this pedestrian action movie seems almost unbearable through the lens of the original series. Every bit of social commentary and sci-fi mystique that made Japanese film and books so stunning has been wrung dry. Respect for the viewer ends up in the dustbin and is replaced by an obnoxious, paint-by-numbers plot of good versus evil. And as I went to my screening, ready to laugh off the rumors of cast whitewashing, I left the theater stunned at how blatantly that issue played into the final product.

When Ghost in the shell reached theaters in 1995, it was one of the only iconic combinations of high-action set pieces and ‘how technology affects our lives’ plots in the sci-fi film genre. That has changed of course The Matrix entered the movie lexicon, but Ghost in the shell really nailed it first — and as an anime, it never reached the popularity it deserved.

A live-action reboot seems like a solid way to right that wrong, and the film’s decades-old template still feels current: humans are toying with robot upgrades; governments and big companies are embracing the robotic future a little too much and are getting burned by it; characters contemplate the impact of how life is changed by a fully connected world. But this live-action reboot doesn’t just lack the subtle interactions buried under the basic plot that made the original such a remarkable film. It also destroys the entire plot structure.

Johansson stars as Major, an almost entirely robotic human. Set in a dim East Asian city smothered in neon lights and holograms, about a year before the start of the film, Major’s brain was rescued from a major accident and transplanted into an otherwise synthetic form. Now she’s an elite member of a law enforcement agency known as Section 9, and this movie begins much like the 1995 anime: our star jumps off the top of a building to infiltrate a skyscraper and disrupt an assassination attempt.

Director Rupert Sanders wastes no time shifting the plot in another direction. Instead of jumping into this skyscraper to disrupt diplomatic negotiations—which caused interesting ripples through the anime’s plot—Major plunges into a sales meeting between a chief executive of a robotics company and a general leader of an African nation. (This possible plot thread about the spread of human-robotic augmentation around the world and “tampering with the soul” is immediately deleted.) Anyway, the director is killed and his robot parts are hacked by a gang of robot geishas, ​​including an admittedly awesome-looking robo-spider-human. Other key members of this augmentation company are knocked out, Major and her team come to learn, and a whodunnit begins.

The mastermind behind these murders resembles the “Puppetmaster” hive-mind concept from the original film, although in this reboot he appears as Hideo Kuze, a character from the Self-contained complex sequel anime series. Sanders decides to throw details and ideas from both characters into a juicer, dropping the healthy pulp to reveal a duller character instead. Puppetmaster’s 1995 subtlety and philosophical musings have been replaced by a gruff, emo band crybaby complaining that his human-to-robot experiment has gone awry. When he finally meets Major, all he talks about is revenge.

That’s a standard action movie driver, of course, but this follows another character origin story for Major. The original film cast her as a stoic, down-to-earth explorer of the world around her, and this, coupled with her conversations with other Section 9 agents, explored the science fiction question of a soul, and the script never failed viewers. with its concept of “ghosts” as souls, too. But Johansson’s character expends a lot more energy fighting and talking to himself (leaving the supporting cast, among other things, in the shadows). She takes drugs to suppress “glitch” hallucinations, which we later learn contain her real origin story. Her companions openly and awkwardly remind her of her “spirit,” the soulful concept only hinted at in the first film. She complains that she feels lonely and disconnected. She’s angrier.

The original film saw Major and the Puppetmaster take their time, chasing each other and building respect until they agree on a final, trippy conclusion of uniting like some kind of virus – not good, not bad, but an exploration of the ‘human’. survival instinct that we can very well build into our increasingly automated systems. But Sanders can’t wait that long. Instead, he sets in motion an “evil man in an otherwise good government,” and Major and Kuze become too burdened with one-dimensional revenge motives to do anything but chase the bad guy and kill, kill, kill.

I regret agreeing to this movie

It doesn’t matter that Major is covering up the dozens of people Kuze kidnaps and tortures as part of his revenge “network”, nor that one of the main plot threads now revolves around government bureaucrats who suddenly and easily change their minds to facilitate Major’s ultimate revenge plan. The entire movie throws out every cool, intriguing, and subtle concept in the 1995 film. Sanders adds a few obvious legacies, including a myriad of fingers typing Android and a couple of guys driving around town in a garbage truck. But these are so bizarrely separate from Sanders’ version of the story that they look like they were filmed solely for the sake of this movie’s trailers – to reassure concerned fans that they’re in good hands. They are not.

Major also repeats a bizarre catchphrase as he completes work-related tasks by naming himself and “I consent,” which is only weird because the original series played with and questioned concepts of free will and human autonomy. Not here. Characters never stop to reflect on the nature of their humanity, nor do they reflect on how network connectivity and robotic augmentation mask the terrifying idea that we are all just automated machines doing what we’re told. Consent as a concept is wasted as a catchphrase, and it only pays off as a cheesy exclamation point for a murder at the movie’s climax.

Bizarre, this new one Ghost in the shell skips headlong into questions about Johansson’s casting. We learn that her character’s original brain comes from an East Asian woman in her 20s named Motoko Kusanagi, who is revealed when Kusanagi’s vague flashback form collides with Major. But even after this revelation, Major continues to repeat the film’s mantra: that our… actions define us, not our past. To bring this point home, Major has the audacity to go to Kusanagi’s grave at the end of the film, where her mother is crying, telling her, “You don’t have to come here anymore.” Culture? Tradition? To grieve? Pfft. Your new improved white daughter is here with no nasty memories of her old life!

The original film is not an untouchable anime opus. The sleepily slow pace could have been tightened up, and the script has its pitfalls. A live-action reboot may never have lived up to some of the original movie concepts, like the maelstrom that is East Asian politics, but it had a lot of ass by at least rereading the basic plot details. Even today, the original feels like an up-to-date, modern commentary on an Internet-of-things world — and that could have easily been reheated. Plus, this reboot deserves credit for some cool CGI and action moments, along with perfectly solid acting in action movies. Johansson takes full advantage of the script and the motivations she provided, and Pilou Asbæk (Johannson’s co-star in Lucy) is a perfect choice to play her police assistant Batou. (Plus, that character’s implanted robotic eyes look great in this live-action version.)

But in this reboot, new, compelling plot threads continue to languish, dividing the original genre-defining plot in the service of one of the finer but forgettable action movies in recent memory. It’s like someone turned around Gone with the wind in a buddy cop comedy starring Scarlett and Mammy. This reboot couldn’t have missed the point any harder.