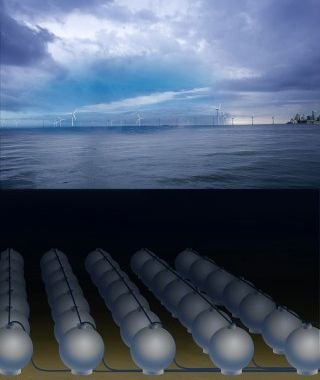 Pumped storage is a decades-old technology with a relatively simple concept: when electricity is cheap and plentiful, you use it to pump water up into a reservoir above a turbine, and when electricity is scarce and expensive, you send that pumped water down. a turbine to generate more power. These pumped storage facilities are often an aid to other electricity generation systems and serve to compensate for fluctuations in the amount of power on the grid.

A German research institute has spent years trying to adapt pumped storage to ocean environments. The institute recently completed a successful four-week pilot test with a hollow concrete sphere it placed at the bottom of Lake Constance, a body of water at the foot of the Alps. The sphere has a diameter of three meters and contains a pump and a turbine. As with traditional pumped storage, when electricity is cheap, water can be pumped out of the sphere, and when it is scarce, water can be left in the sphere to move the turbine and generate electricity.

The Fraunhofer Institute for Wind Energy and Energy Systems Engineering envisions 30-meter inner diameter spheres placed 700 meters (or about 2,300 ft) underwater. Assuming the spheres were equipped with existing 5 MW turbines that could function at that depth, the researchers estimated that each sphere would provide 20 MWh of storage with a four-hour discharge time.

In an underwater “energy park,” dozens of these spheres could be connected near an offshore wind farm to create a system that could add extra reliability to a heavy renewable grid. The institute admits that the economics of this project only work on a large scale. It estimates that more than 80 bulbs are needed “to achieve a relevant overall performance/capacity for the energy market”.

In November, the Fraunhofer Institute placed the test sphere 200 meters off the coast of Lake Constance and 100 meters below the surface of the lake. The institute collected its globe last week. Researchers are still sifting through the data collected by the pilot program to create better computer models of how this scheme would work in the real world. The institute wrote that it wants to do a follow-up project with a larger sphere that would be under water for longer.

According to the institute’s press release, an offshore project is still three to five years out, but industry partners and public sponsors are apparently interested in further funding the project. This test was carried out with the help of the German Ministry of Economic Affairs and Technology.