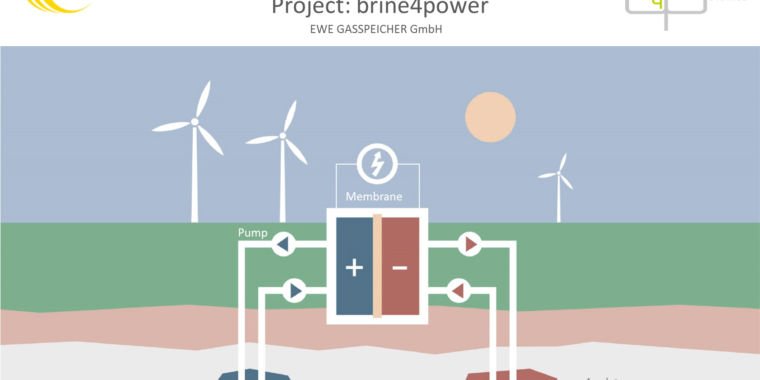 A German energy company recently announced it is partnering with a university to build a massive power battery in underground salt caverns currently used to store natural gas. The grid-connected battery, the company says, could power Berlin for an hour.

The technology on which the project is based should be familiar to Ars readers. Two years ago, Ars wrote about an academic paper published in Nature that described “a recipe for an affordable, safe and scalable power battery.” German researchers had developed better components for a large, stationary battery that used negatively and positively charged liquid electrolyte pools to exchange electrons through a reasonably priced membrane. These so-called “power batteries” are especially interesting for use on the power grid – they have a low energy density, so they don’t work for portable energy storage. But as utility-scale electricity storage containers, their capacity is only limited by the amount of space you have.

Now the ideas in that article are gradually being applied in the real world. EWE Gasspeicher, a gas storage company owned by German energy company EWE, announced in June that it was considering building the researchers’ power battery in two medium-sized salt caverns that the company uses to store natural gas. EWE calls the project “brine4power,” which indicates how a saltwater brine is used in the electrolyte.

Ralf Riekenberg, head of the brine4power project, stated in a press release that EWE and the researchers “need to run some more tests and clarify several things” before starting construction. “However, I expect we will have a working cave battery by the end of 2023,” Rickenberg said.

So far, the researchers, who work at Friedrich Schiller University in Jena, have only built a power battery the size of a rain barrel. The project is planned to proceed in three phases: first, an above-ground test system from 10 kWh to 40 kWh will be built; then they build an above-ground test system from 500 kWh to 2,500 kWh; then, if all goes well and the natural gas caverns fit well, a pilot battery with a capacity of 120MW/750MWh will be built in the salt caverns of EWE. EWE claims its power battery would be the largest in the world.

But if construction lasts until 2023, EWE’s project probably won’t hold that title. Currently, the largest container flow battery in the world is located in Snohomish County, Washington State. It is a (relatively) small 2MW, 8MWh vanadium redox power battery comprising more than 20 connected shipping containers built by UET. But UET’s sister company in China is currently building a power battery outside Dalian that is much, much bigger – that project would be 200MW/800MWh, with the first half to be completed by the end of 2018.

The idea of ​​EWE’s salt cave was made possible thanks to the materials the Jena researchers put forward in their 2015 papers. Instead of using vanadium, which could pollute the environment if it seeps out of the ground, this project uses “recyclable polymers (plastics) dissolved in salt water as an electrolyte,” says EWE.

“In initial tests, Jena’s redox flow battery was able to withstand up to 10,000 charge cycles without losing a critical amount of capacity,” the Jena researchers wrote of their battery. “The energy density of the system presented in the study is 10 watt-hours per litre.”

EWE’s salt caverns are located on Germany’s northwest coast in Jemgum, and “some are even so large that they fit into Cologne Cathedral,” the company says.

With Germany pushing to put record amounts of wind and solar energy on the grid (900 MW of offshore wind power in 2017 alone, Reuters reported today), storage projects were equally ambitious. Earlier this year, German mine owner RAG AG announced a pumped-storage scheme to be built in an underground coal mine that is soon to be decommissioned. And a German research institute has been working on a pilot project to build underwater energy storage spheres that would pump out water in times of abundant electricity and use water flowing in to create hydroelectric power in times when demand for electricity exceeds supply. .