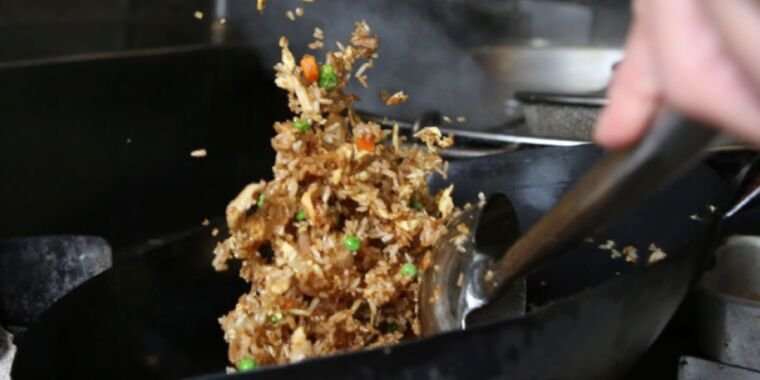 Fried rice is a classic dish at just about any Chinese restaurant, and the strenuous process of tossing the rice in a wok over high heat is the key to the perfect finished product. There is always chemistry involved in cooking, but there is also quite a bit of physics involved. Scientists at the Georgia Institute of Technology have devised a model of wok tossing kinematics to explain how it produces fried rice that is nicely browned but not burnt. They described their work in a recent article published in the Journal of the Royal Society: Interface.

This work comes from David Hu’s lab at Georgia Tech, which is known for investigating phenomena as diverse as the collective behavior of fire ants, skaters, snakes, various climbing insects, mosquitoes, the unique properties of cat’s tongues, and animal bodily functions such as urination and defecation – including a 2019 Ig Nobel Prize-winning study on why wombats produce cubed poop. Hu and his graduate student Hungtang Ko — also a co-author of a 2019 paper on the physics of how fire ants work together to build rafts — found that they shared a common interest in the physics of cooking, particularly Chinese stir-fry.

Hu and Ko chose to focus their research on fried rice (or “scattered golden rice”), a classic dish that dates back some 1,500 years. According to the authors, stirring the ingredients in the wok ensures that the dish browns but does not burn. Something about this cooking process creates the so-called “Maillard reaction”: the chemical interaction of amino acids and carbohydrates that are exposed to high temperatures and are responsible for the browning of, for example, meat.

But stir-fries are tough, and the constant tossing and turning can take a toll on Chinese cooks, about 64 percent of whom report chronic shoulder pain, among other ailments. Hu and Ko thought that a better understanding of the process’s underlying kinematics could one day lead to fewer wok-related injuries for chefs.

In the summers of 2018 and 2019, Ko and Hu filmed five chefs from wok restaurants in Taiwan and China cooking fried rice and then extracted frequency data from those images. (They had to explain to the customers that the recording was for science and that they were not making a TV show.) It usually takes about two minutes to prepare the dish, which includes sporadic wok stir-fries – about 276 toss cycles in total, each of which lasts a long time. about a third of a second.

Ko and Hu presented preliminary results of their experiments at a 2018 meeting of the American Physical Society’s Division of Fluid Dynamics, publishing the full analysis in this latest paper. They were able to model the wok’s motion with only two variables, similar to a two-link pendulum, because cooks typically don’t lift the wok off the stove and maintain “a single sliding point of contact,” they wrote. Their model predicted the rice’s trajectory based on projectile motion, using three metrics: the proportion of the rice thrown, how high it was thrown, and angular displacement.

The authors found two distinct stages of wok wok: pushing the wok forward and turning it clockwise to catch rice as it falls; and pull the wok back while turning it counterclockwise to toss the rice. Essentially, the wok performs two independent movements: side to side and a seesaw movement where the left end moves in a circle clockwise and the right end moves counterclockwise. “The key is to use the stove rim as the pivot point of the seesaw motion,” the authors wrote. Also important, the two movements share the same frequency, but are slightly out of phase.

Hu compared the effect to ‘turning pancakes or juggling rice’. The trick is to make sure the rice is constantly leaving the wok and letting it cool down a bit, as the wok temperature can reach up to 1,200 degrees Celsius. This results in fried rice that is perfectly browned but not burnt.

Based on their analysis, Hu and Ko recommend that cooks increase both the movement frequency when tossing fried rice into a wok and the “phase delay” between the two different movements. This “may allow rice to jump further and promote cooling and mixing.”

The mathematical model that Hu and Ko developed is not just a fun curiosity; it should also be useful for industrial robot designs. One goal for the authors is to develop a wearable exoskeleton or similar device to reduce the number of shoulder injuries in Chinese chefs. But there has been an interest in automating cooking since the 1950s to perform basic functions like slicing, cooking, frying, and flipping pancakes — the latter task is usually based on reinforcement learning algorithms.

There have also been attempts to automate the stir-frying of fried rice in large quantities, with limited success. Previous robotic designs included a rotating drum to mix ingredients and a seesaw wok to flip ingredients, complemented by an automated spatula. These could mix ingredients via rotation or shaking, but could not toss the rice and thus could not produce the ideal fizzy grains. “If there was an automated way to do this, it could be very useful [for chefs]Hu said.