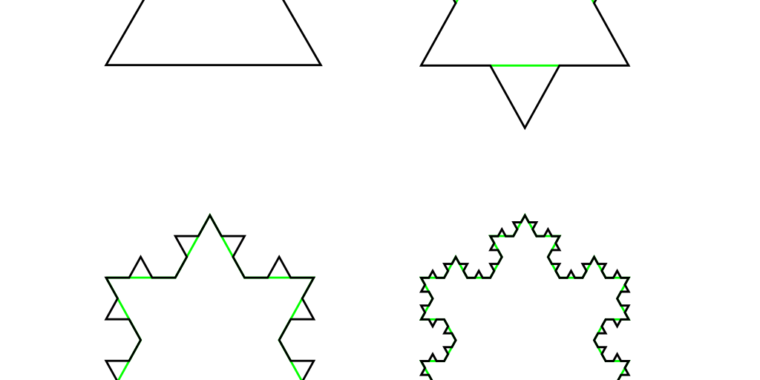 Fractals are a source of endless fascination for me. Life itself is based on many of the concepts of fractals: trees are fractal, as are springs, coastlines and many other things in nature. Indeed, it was the realization that landscapes are fractal that made modern animation films possible.

But what about fractional dimensions in quantum mechanics? It turns out that electrons in a Sierpiński packing are also fractal, and that has some pretty cool consequences.

A fractal is a strange beast. A line is 1D, a square is 2D and a cube is 3D: dimensions come in integers. Except they don’t. For example, it is possible to create a shape with a finite area, but a perimeter that is infinitely long (the construction of such a shape is shown below). A shape with these properties does not behave like a 1D object, but it is not a 2D object either. Instead, it’s a one-and-a-bit D object. That’s a fractal.

The construction of a fractal also hints at another property of its nature. Zoom in on a fractal and you’ll find a new copy of the fractal that looks similar…just smaller. That’s why branches look like small copies of a tree: the branching structure is a fractal.

Quantum mechanics has a strange relationship with fractals. At the level of atoms and electrons, there is not much in the way of fractals. Atoms arrange themselves in regular patterns that don’t follow fractal rules. Electrons have orbits with a nice, regular geometry. None of this fractional dimensional stuff here, thank you very much.

An interesting question that arises is how do electrons behave in a fractal structure? According to calculations, they should reflect the fractal nature of the structure. It is difficult to observe that. The electrons are usually in materials and the wave nature of the electron does not extend very far. That means, unless the fractal structure starts at the scale of just a few atoms, the electron will not notice the entire structure. Instead, it will just bounce from whatever corner it is closest to.

Then there’s the problem that most electrons can move in 3D, so the material has to be 3D. That turns out to cause problems on the scale that the electron cares about. This led the researchers to consider ultra-clean metal surfaces, and copper in particular.

The electrons that travel along the surface of a metallic crystal are in a slightly different environment than the electrons that are in the crystal’s body. To move from the surface to the bulk (or vice versa), they have to change their energy by a fairly large amount. In effect, this traps some electrons on the surface, creating a 2D sea of ​​electrons.

Create a 2D fractal in a 3D world

The surface electrons are also greatly affected by contaminants placed on the surface, and this is where the new research comes in. Carbon monoxide is a common contaminant in vacuum systems, where all this work is done.

(Carbon monoxide is not very common in our atmosphere, so you may wonder why it hangs out in vacuum systems. Well, the truth is carbon monoxide Loves metal. Once it hits a metal surface, it clings to it ferociously, like an Ozzy fan clinging to a Black Sabbath tour bus. So the vacuum pump removes everything, leaving only the small amount of carbon monoxide to stick to the walls of the chamber.)

The researchers used a very fine needle to gently push and pierce carbon monoxide molecules onto a copper surface. They were able to build up a fractal structure called a Sierpiński gasket of carbon monoxide: going from the smallest possible version (first generation), to a third generation carpet.

After producing the carpet, the researchers used the same needle to sample the electron wave function at various locations around it. More precisely, they measure the current through the stylus as a function of the applied voltage, which is more like a measure of how many electrons are near the stylus.

Aside from the intrinsic coolness of the work – placing molecules with atomic precision was unthinkable not so long ago – what have we learned?

Electrons that must live in a fractal structure also acquire a fractal character (with a size of about 1.58). That means their energy states tend to break down from a continuous collection (electrons have all energies within a certain range), to one with clusters. For some energies, the electrons end up trapped, meaning they don’t move through the structure and the conductivity drops. For other energies, the electrons must follow a specific set of paths through the structure, and for still others, the electrons can move freely.

Now that it needs an (almost) perfectly clean copper surface, this is of little practical use. But it does allow researchers to investigate how the properties of an electron gas (or liquid) change as the dimensionality of its environment gradually changes from 1D to 2D.