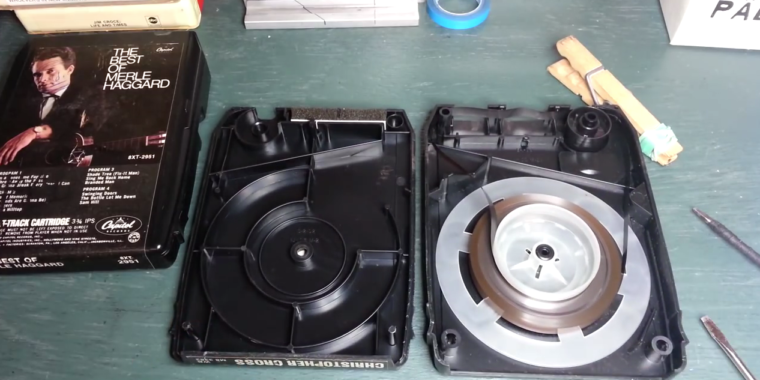 The 8-track cartridge, also known as the Stereo 8, first appeared at trade shows in 1964, just 18 months after the cassette, and at first it seemed to have it all: it was relatively small, portable, and had fairly good sound quality. And despite its roots in the crazy men in-car market of the 1950s, it was also seemingly future-proof, with a unique potential for quadraphonic sound (a potential that was later partially realized). Within a few years, several megastars were using it and it was quickly installed in virtually every radio station in the western world – and with domestic sales soaring, it even had a huge ad campaign spearheaded by TV star Jimmie “Dy-no-mite!” walker.

But within a few years of that expensive media blitz, the consumer-market cartridge was dead in the water — and by the mid-1990s, it was a rare antique, even in broadcast studios. What went wrong is easy to explain in retrospect, although it seemed mysterious at the time.

To start at the beginning, the 8-track was based on something refined by the one and only Earl “Madman” Muntz. Master Muntz was a businessman, engineer and promoter who became famous – or rather, infamous – in the US for his outrageous dress, stunts and TV appearances. He was quoted – and mocked – by many top celebs and comedians such as Bob Hope and Jack Benny. And Muntz loved publicity so much that during the height of McCarthyism—with people being fired or deported just because they had Communist friends—he seriously asked one of his advisers, “Do you think I’ll make the headlines again if I change my mind? now with the Communist Party?”

High school dropout Muntz built his own radio at the age of eight, and he was barely a teenager when he designed and built a radio for his parents’ car – way back in 1928, when even cars were still fairly new. He launched the Muntz Jet car after World War II, a reworked and redesigned Kurtis Kraft Sports car, complete with a full cocktail bar in the back. But he’d changed the Kurtis so much, and added so many extras, that he actually lost $1,000 on every car sold. So, in the late 1940s, he pioneered the first low-cost black-and-white TVs, while simultaneously popularizing the abbreviation “TV” itself. Earl Muntz’s televisions were at the lowest price, first under $150 and then under $100, and he himself appeared in subsequent advertisements, wearing bright red long johns and a big furry Napoleon hat, shouting: “I want to get rid of these TV sets but Mrs Muntz won’t let me! She’s crazy!”

It may have been crazy, but it worked spectacularly. Muntz’s TV sales brought in an astonishing $49 million in 1951-52 alone—nearly half a billion in today’s money—but his overheads were tight and his bank unfriendly, and within two years he posted losses of more than a billion dollars. million dollars a year. Muntz’s television sales then began to decline and he eventually sold his television division in 1959. But by then he had returned to his first loves – audio and cars. Peter Goldmark’s Highway Hi-Fi had caused a stir, but his in-car hi-fi system had one major problem: it was all based on vinyl records whose audio signal came out through a stylus, a stylus that often jumped when the vehicle overturned. the least thrust. This happened until it was heavily loaded, a process that made playing easier but quickly wore out the records. It was fine if the car was in the garage or crawling at 10 miles per hour, but that pretty much negates the purpose of a mobile Hi-Fi in the first place.

Cart-horse in front of the cart

The first major response to this mobile audio problem came through the Fidelipac Cartridge, also known as “the carriage.” Like the car and the motion picture movie camera, the cartridge appears to have several separate parents. Vern Nolte is a purported inventor, once an employee of the Automated Tape Company and a distant relative of 1980s actor Nick Nolte, but the most cited creator is George Eash. Created by Eash in the mid-1950s, the Fidelipac Cart was an analog magnetic tape format based on an endless loop system (which in turn was first developed by Bernard Cousino, who had shared a workshop space with Eash for several years). Rather than put the cart before the cart horse, Eash realized he was not a manufacturer and licensed the device to Telpro Industries, which sold it under the Fidelipac name.

This was aimed entirely at the pro radio market and was based on a quarter-inch, two-track format with “broadcasting” or 7.5 inches per second (ips). One of the tracks was mono, for broadcast, the other was a cue track. A later version used three tracks, two for stereo broadcasting and one for cueing. Rarely were even the shortest of radio shows broadcast this way, as the Fidelipac — and its various bastard children — were mostly used for background music, jingles, stings, and advertisements. The most popular version was “size A”, a four-inch-wide package with a maximum runtime of just over 10 minutes at 7.5 ips. Professional radio use continued – sometimes with 15ips versions, sometimes with the more modest Stereo 8 carts – well into the 1990s. Here’s a shot of a cart being used as a potential weapon (at 5:19 PM) in the 1980s radio sitcom WKRP in Cincinnati:

In late 1962, Madman Muntz and George “Fidelipac” Eash began work on the Stereo-Pak system, a four-track cartridge aimed at automobiles that incorporated a number of simplifications – a practice later known as “Muntzing”, i.e. making modern electrical and electronic devices less complicated. Both changes helped mass production: one kept the speed at just 3.75 ips, degrading sound quality, but kept spinning twice as fast as its new music cassette rival, while the other had to use a moving playhead between the two. two-track program. It offered much more continuous music than the Highway Hi-Fi, and it all seemed to work well – so Muntz went on another new adventure.

His MEC firm, Muntz Electronics Corporation, soon licensed music from all the major music companies and released many hundreds of different tapes until the late 1960s. Muntz also exhibited its Stereo-Pak cartridge and its Autostereo predecessor at the 1967 Consumer Electronics Show, and funded several magazine and poster advertisements, virtually all featuring young women and evocative slogans, such as, “Come join the Muntz car radio, put to…loverboy!” Subtle, right?

While the Autostereo and Stereo-Pak players weren’t particularly cheap—$130 in 1963, $1,050 today—they found a small but growing market among the rich and famous, soon making their way into Muntz’s LA stores. (mostly manned, again, by young women in bright uniforms). Rat Pack superstar Frank Sinatra quickly bought a set for his new Buick Riviera – and his friends Dean Martin, Sammy Davis Jr. and Peter Lawford soon followed suit. While driving, Martin’s co-star Jerry Lewis would learn his lines by scripting a play-record version of the Stereo-Pak.

But it’s always been hard to keep the Madman apart from King Lear – and so William Powell “Bill” Lear comes in at this point. Lear, a former used car salesman, was another ‘car freak’ who had his own used car fleet when he was only 19 years old – his mother signed the sales forms for him until he turned 21. Lear was also a self-taught inventor who, as a teenager, was expelled from school twice for ‘showing teachers’, ie demonstrating more technical knowledge than his high school staff. He continued to excel, gaining as many as 120 new patents in a working life of just over 45 years.