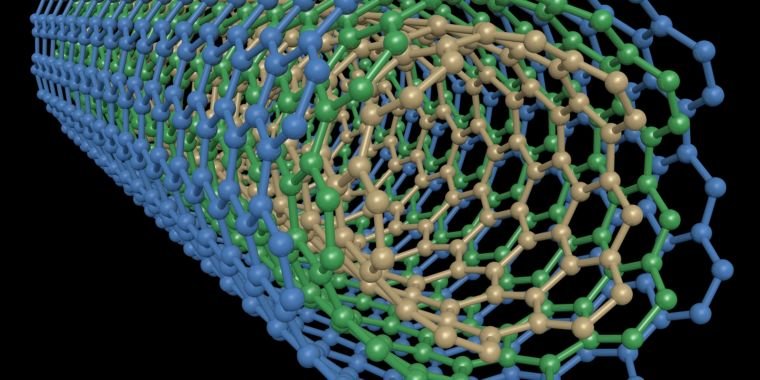 A carbon nanotube is tough – over 30 times more robust than Kevlar by some measures. However, since they’re only a few atoms thick, that toughness isn’t particularly helpful. Attempts have been made to bundle them together, but nothing has worked out particularly well; the individual nanotubes are usually short and it is difficult to get them all aligned in the same direction. As a result, these attempts have resulted in bundles that are filled with structural defects, often perform worse than Kevlar, and are only a few micrometers in length.

Now, a group at Beijing Tsinghua University appears to have found a way around many of these problems. It was able to synthesize nanotubes that are centimeters long and bundle them together to make a fiber almost as strong as an individual nanotube. It’s not quite time to book space elevator rides just yet, but at least this work suggests nanotubes may eventually break out of the realm of the microscopic.

The biggest problem in assembling nanotubes into a usable fiber is the length of the individual nanotubes. It’s what keeps the fibers short, and the loose ends likely add to the flaws that weaken the finished product. So the first step in building better ones was finding a way to make longer carbon nanotubes. This was achieved through a variation of a standard technique called chemical vapor deposition, in which the reactants generating the nanotube are present in the atmosphere of the reaction chamber. In this case, the researchers let the reactants flow in one direction through the chamber and the nanotubes grow in the same direction as that flow.

This process produced a population of carbon nanotubes that could grow up to several centimeters in length. Tests showed a tensile strength of 120 GigaPascals, indicating that the nanotubes were free of imperfections.

The next problem was bundling the tubes, but the researchers were able to use a similar approach to solve this problem. They continued to flow gas over the nanotubes, but narrowed the chamber on the windward side, creating a channel that pushed the nanotubes together. Once compressed, elemental chemical interactions called Van der Waals forces held them in place like a bundle.

The authors got a hint by tracking the strain of individual bundles. In a single nanotube, the stress would increase until the tube broke, after which the stress dropped to zero. But for the bundles, the trunk would build up, drop to an intermediate level, and start rebuilding again. The authors concluded that the nanotubes in the bundles were not aligned along their length, so some bulged out a little and others were shorter. As a result, the shorter ones were put under pressure by straining the bundle, while the longer ones were simply in reserve. When the short ones snapped, some of the longer ones took the pressure. There was never a point where the whole bundle split the tension.

Fortunately, this experiment also showed them how to solve the problem. The forces holding the beam together are not particularly strong, and it should be possible to move individual nanotubes within the beam without breaking anything. To do this, the researchers simply ran the beam through a cyclic stress-relaxation cycle, which they reasoned should trigger internal rearrangements. This process reduced the tensile strength to 80 GigaPascals – not the full strength of an individual nanotube, but much better than it had been before. And it’s about 25 times the strength of Kevlar and five times higher than the best technical fiber in existence.

While the authors note that this work could find a home in “sports equipment, ballistic armor, aviation, aerospace, and even space elevators,” we’re still a long way from all that. Ideally, instead of synthesizing the nanotubes in chunks that are centimeters long, we would like to have some sort of continuous production process. Still, the work is important because it points to a world beyond micrometer-scale nanotube fragments.

Correction: Removed use of the term toughness to avoid confusion with the technical term.