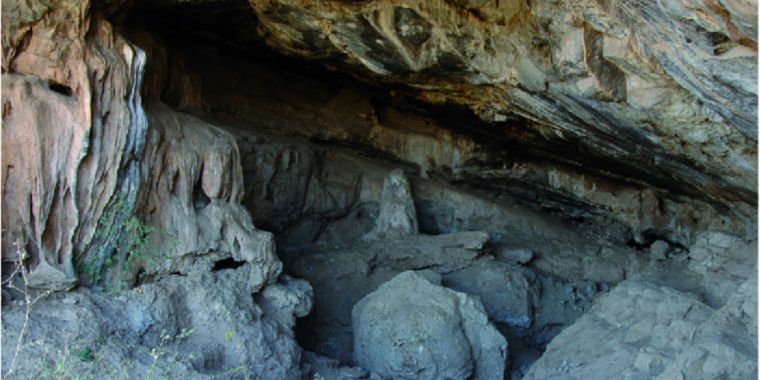 45,000 years ago, in an area that is now part of Ethiopia, people found a spacious cave at the foot of a limestone cliff and turned it into a special kind of workshop. Inside, they built up a cache of more than 40 kilograms of reddish stones with a high iron oxide content. Using a variety of tools, they grind the stones into powders of various colors: deep red, glowing yellow, pinkish gray. They then treated the powder by heating it or mixing it with other ingredients to create the world’s first paint. For at least 4,500 years, people returned to this cave, known today as Porc-Epic, covering the walls with symbols and coloring their bodies and clothes. Some anthropologists call it the first artists’ workshop.

Now, a new study in PLoS One suggests that the cave offers us a new way of understanding cultural continuity in the Middle Stone Age, when humans first became sophisticated toolmakers and artisans. Paleologists Daniela Eugenia Rosso, Francesco d’Errico and Alain Queffelec sorted through the 4,213 pieces of ocher found in the cave and analyzed the layers of history they represent. They claim that Porc-Epic is a rare continuous record of how humans pass down knowledge and rituals over dozens of generations.

It is possible that people used Porc-Epic to make conventional tools, as ocher can be used for gluing and for tanning hides. But after analyzing the methods people used to powder the rocks, researchers are pretty confident that these techniques have been optimized to produce small amounts of powder best suited for decoration and art. Over the centuries that people used the cave, they see many changes. Early artisans would grind the ocher along with other stones to produce powder, but later the rocks would be reduced to flakes before being crushed.

The choice of color also seemed to change over time. “While reds and dark reds are dominant in all levels, they are proportionally less represented in levels where ocher is more abundant,” Rosso and her colleagues write. “These levels are richer in gray, brown, orange and yellow pieces and pieces of multiple colors. We also see a decrease in dark red and red + yellow, and an increase in red and red + gray.”

About halfway through the cave’s use, perhaps about 43,000 to 42,000 years ago, there is a noticeable increase in the amount of ocher processed. That’s when the researchers find that red is “less well represented,” complemented by a wide range of colors. Later in the cave’s life, when grinding techniques had almost ceased, the colors became less vivid.

One of the great mysteries of Porc-Epic Cave is what happened during that peak period when we suddenly see people working with a myriad of different colors of ocher. The cave seems to be bustling with activity. There is even evidence of what may have been apprentices, whose grinding and chipping work is much more irregular and imprecise than what we usually see. It seems clear that at this time a greater number of people used the cave, but why? The researchers believe there was no dramatic cultural shift simply because there are no changes in the other types of tools people used at the time. There may have been a change in the environment that made the area more hospitable to larger populations. Or maybe the existing population simply demanded more ocher powder.

But perhaps the most incredible part of the Porc-Epic cave is the lack of change. For more than four millennia, people used this cave to produce paint from the same types of reddish rocks. Their techniques and favorite colors varied somewhat over time, but for the most part they stuck to what they had learned from generations of ancestors. We wonder what the ocher symbolized for these people. The researchers wonder if they may have perceived colors differently than modern humans. They write:

Continuity in choice of raw materials over time supports the hypothesis that Porc-Epic inhabitants of the Late Middle Stone Age supplied themselves with ochers of different textures, hardness, density, color strength and hues over a considerable period of time. While most color types fall within the broad category of ‘red’, a small proportion of pieces display color characteristics that appear to fall outside this category. This raises the question of whether different shades of “red” and other colors were seen as separate categories by the citizens of Porc-Epic.

Perhaps every shade of red, every shade of yellow or gray had its own meaning. That might explain why Porc-Epic artisans always had many different kinds of ocher on hand. These different types of ocher may have been elements of a culture whose traditions have endured for many thousands of years, whether in ritual or fashion or something beyond our imagining.

When we look into the Porc-Epic cave, we have to recognize that our society is not the first society on Earth with millennia of ancient history. When Neanderthals still walked the Earth, our ancestors could look back to their distant past and touch the same stones their ancestors had thousands of years before.