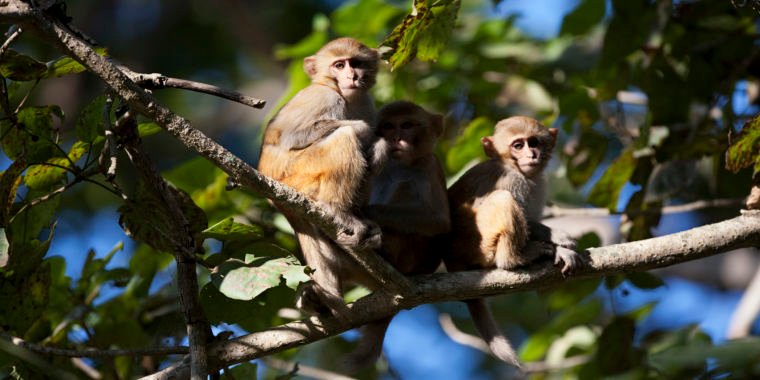 In the 1930s and 1940s, the captain of a glass-bottom boat released a dozen rhesus monkeys onto an island in Florida’s Silver River, which winds through Marion County in the center of the state. The idea was that the monkeys, native to Asia, would be a laugh for passing tourists. But it seems the monkeys are the last ones laughing.

For starters, macaques are excellent swimmers and got off the island promptly. In the decades since, their population has exploded to over 800 in the surrounding Silver Spring State Park and nearby Ocala National Forest. A new study, published in the February issue of Emerging infectious diseases, reveals that the population also spreads a dangerous type of herpes. The virus-macacin herpes virus 1 (McHV-1), also known as herpes B or monkey B virus, is common and causes mild infections in macaques. But in humans, it can lead to serious, often fatal, diseases.

The authors of the study, led by Samantha Wisely of the University of Florida, Gainesville, concluded that the monkeys should be considered a public health problem and that “adequate public health measures should be taken.”

For the study, Wisely and her colleagues analyzed blood data collected from 317 monkeys by private trappers between 2000 and 2012. The researchers also examined 121 oral swabs, 23 fecal samples and 10 soil samples they collected between 2015 and 2016.

Based on the blood tests, the researchers estimate that about 25 percent of the population carried the virus between 2000 and 2012. From the saliva swabs, about four to 14 percent of those infected were actively shedding the virus during the stressful fall mating season of 2015.

Like the herpes viruses that infect humans (HSV-1 and HSV-2), McHV-1 infects nerves and can become inactive. If the animals are stressed or have a weakened immune system, the virus can re-emerge and seep from the mucous membranes of the mouth, nose or genitals. This is similar to how HSV-1 and HSV-2 erupt periodically in humans, usually around the mouth and genitals, respectively.

But when McHV-1 gets into humans, it can cause serious problems in the central nervous system. The virus can be transmitted to humans through bites and scratches from monkeys, as well as infectious fluids/feces splashed in the eyes (which happened once). Depending on the route of infection and the number of virus particles transmitted, the infection in humans can progress from flu-like symptoms to neurological problems. These include double vision, lack of voluntary control of muscle movements and paralysis. If neurological symptoms develop, the infected person is likely to die, even with antiviral therapy.

Since McHV-1 was identified in 1932, researchers have documented only 50 cases of human infections, all from captive macaques. Of those cases, 21 resulted in death.

Wise and colleagues say the threat of transmission in Florida is real. They note that between 1977 and 1984, the Florida Fish and Wildlife Commission recorded at least 23 cases of monkeys biting humans in Silver Spring State Park. After hundreds of monkeys were collected from private traps between 2000 and 2012, the population is now lower, with an estimated 175 monkeys in Silver Spring State Park in 2015.

Still, the researchers note that the primates have “high reproductive capacities” and are used to getting close to and interacting with humans. The bottom line is that “these macaques can repel McHV-1, putting humans at risk for exposure to this potentially deadly pathogen,” the researchers conclude.