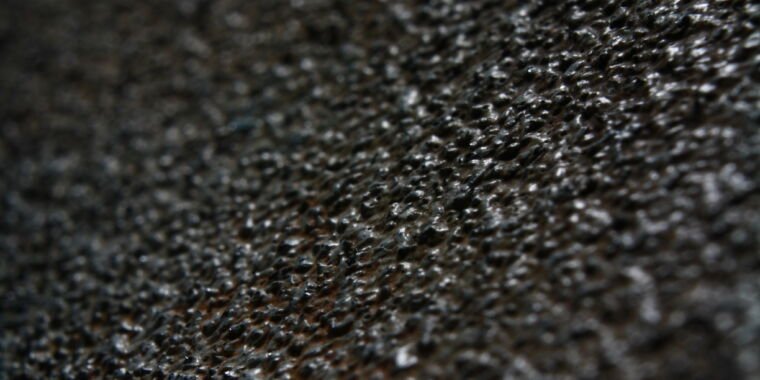 A cook’s response to cockroaches in the kitchen is a good approximation of a physicist’s response to friction: Not only is it undesirable, it’s also difficult to get rid of. OK, our analogy falls on one last hurdle: Unlike cooks, most physicists don’t really want to understand friction.

That said, there are a few physicists with strong stomachs trying to understand friction. One of the problems they face is that friction is so… individual. Every experiment is different. Even copies of the same experiment are slightly different. Despite this, one group has now managed to come up with a general model that mimics many of the key features of friction.

Friction, how I stab at you

Actually, part of that last sentence is a lie. The model focuses on the transition between two different types of friction. I’ll get back to that in a minute.

When we look at friction in detail, the reasons we find difficult to describe become apparent. Imagine that two plates are slid over each other. At some level, we can say that friction arises from the attractive force between the two plates due to local electron density imbalances. In other words, the positively charged bits of one plate are attracted to the negatively charged bits of the other plate. So far, so mind-numbing.

Experimentally, it’s even worse. If we were to repeat the experiment twice with the same plates, we would probably get a different result. Why? Since the first experiment would have changed the surface, the second experiment is performed under different conditions. It’s enough to make you despair.

Now let’s make friction even more difficult by starting our experiment from rest. The plates don’t move, and we apply a force… and more force… and more force. Suddenly the plates break free and begin to slide. The initial friction is much greater than the friction as the plate moves. These two frictions are called static and dynamic friction, and the transition between the two is rather more complex than I just described. You’d think any model trying to replicate even the most basic of functions would be complicated. And you would be wrong.

To understand the transition between static and dynamic friction, a group of researchers created a breathtakingly simple model. A surface is perfectly flat. A series of wheels are placed on the surface so that all the wheels are in contact with each other. The wheels can slide by an applied force and they can rotate by a torque. When one wheel does something, it is in contact with the next, so the forces and torques go through the chain.

The wheels are held against the surface by a force perpendicular to the surface. Friction is described by a single number. No complicated physics for us, thank you very much. The game the researchers are playing is to push one of the wheels and repeatedly apply Newton’s laws until the motion of the wheels stabilizes. Then they do it again for another power…and again.

Set the wheels in motion

As in reality, the researchers see a change from static (high) friction to dynamic friction as soon as the force exceeds a certain threshold. By examining the dynamics of the wheels more closely, they show that the transition to dynamic friction occurs because the applied force creates a wave that propagates stably along the wheels. That wave allows movement along the surface with much less force than when there is no wave.

The appearance of the wave is predicted by behavior observed for forces below the threshold. For smaller forces, similar waves are generated, but they quickly die out as they propagate, preventing the transition to easy motion. The researchers demonstrate all this with a nice numerical analysis of the dynamic system.

The model is remarkably good at representing the commonly observed characteristics of the transition from static to dynamic friction. The model, as the authors point out, has the advantage that you can dig right into how it works and see exactly what’s going on. That’s because the model isn’t something you can use to calculate real frictional forces for real-life situations; instead, it is a tool for discovery.