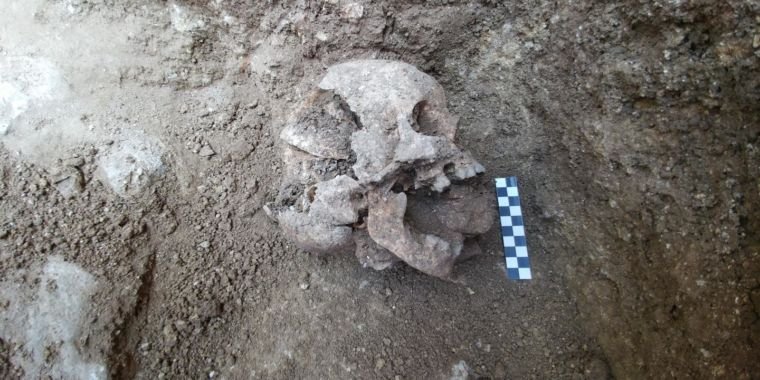 Archaeologists have discovered the skeleton of a 10-year-old child at an ancient Roman site in Italy with a rock carefully stuffed into its mouth. This suggests that those who buried the child — who likely died of malaria in a deadly outbreak in the fifth century — feared it would rise from the dead and spread the disease to those who survived. The locals call it the ‘Vampire of Lugnano’.

“This is a very unusual morgue treatment that you see in different forms in different cultures, especially in the Roman world,” said Jordan Wilson, a graduate student of bioarchaeology at the University of Arizona who studied the remains. He added that this could indicate a fear that this person might come back from the dead and try to spread the disease among the living.

Virtually every culture on Earth has some version of a vampire (or proto-vampire) myth. Chinese folklore has the Jiang shi, [corrected] that are reanimated corpses rising from the grave to rob the living; one type has sharp fangs, the better for biting the prey’s neck. Russian, Albanian, Indian and Greek folklore have similar undead monsters. Russian villagers in the Middle Ages often drove stakes into the bodies of suspected vampires at funerals to prevent them from rising again.

A team of archaeologists from the University of Arizona and Stanford University made the discovery over the summer while excavating a site known as La Necropoli dei Bambini (“Cemetery of the Babies”), because it was thought to be solely for the burial of babies and toddlers who died of an outbreak of malaria. (The archaeologists are now reconsidering that assumption.) Based on the open position of the child’s jaw, they concluded that the stone was deliberately placed there, as it would not have happened naturally as the body disintegrated. There were also teeth marks on the surface of the stone.

The most likely explanation is that the locals did this to ensure that the dead child stayed that way. Preliminary excavations among the human remains at the babies’ burial site have uncovered several artifacts often associated with magic at the time: raven claws, toad bones, and bronze cauldrons filled with ash. The oldest remains previously found were those of a three-year-old girl whose hands and feet were weighted down with stones.

“I’ve never seen anything like it. It’s extremely creepy and weird.”

“We know the Romans would go so far as to use witchcraft to prevent evil — whatever contaminates the body — from coming out,” said University of Arizona archaeologist David Soren, who led the dig. Nevertheless, this latest discovery is not common, and none of the other skulls unearthed so far at the site have had a rock in its mouth.

“I’ve never seen anything like it,” Soren says. “It’s extremely creepy and weird.” However, there have been similar burials in other locations in Italy, such as the elderly 16th-century woman, unearthed in 2009, who was buried with a brick in her mouth. She was called the ‘Vampire of Venice’.

The team will return to the site next summer to complete the dig, perhaps to discover more “vampire tombs.” At the very least, the archaeologists will learn more about this particular malaria outbreak and how the community responded to it nearly 1,500 years ago. “Anytime you look at funerals, they’re important because they provide a window into old ghosts,” Wilson says. “We have a saying in bio-archaeology: ‘The dead don’t bury themselves.’ We can tell a lot about people’s beliefs and hopes by the way they treat the dead.”