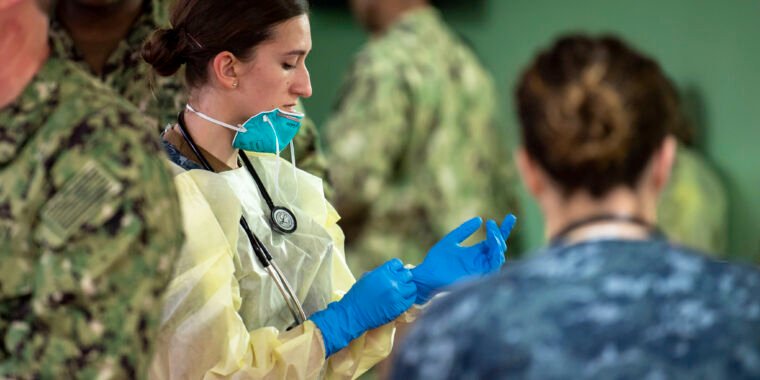 Update, April 24: On Friday, the FDA issued a safety announcement regarding the use of hydroxychloroquine or chloroquine, stating that use of the drugs “should be restricted to clinical trial settings or for the treatment of certain hospitalized patients.” The move came in response to a growing number of reports of “adverse incidents” from hospitals and outpatient treatments, targeting a known side effect of chloroquine and its derivatives: changes in heart rhythm that can be (and apparently have been) fatal.

Chloroquine is known to alter a property of the heart’s electrical activity called the QT interval. If this interval gets too long, the heart can lose its rhythm completely; if the lower chambers stop coordinated contractions, the results are fatal unless they can be restarted. An anecdotal report of successful treatment of COVID-19 had linked chloroquine to the antibiotic azithromycin, which also prolongs the QT interval, leading to the drugs often being prescribed together.

By restricting the drug’s use to hospital settings, the FDA is trying to ensure appropriate care is available if side effects become problematic. The adverse event reports it cites indicate that while there have been some fatalities, there have also been nonfatal cases of the potentially fatal ventricular fibrillation, suggesting that the availability of medical personnel enabled these patients to recover.

A study observing COVID-19 patients found no evidence that the malaria drug hydroxychloroquine, touted as a potential treatment for COVID-19, made a difference to patients’ likelihood of requiring a ventilator. The results also suggested that patients treated with hydroxychloroquine had a higher death rate than those not treated with the drug.

The study was not a randomized clinical trial, meaning the evidence it provides is preliminary and should be interpreted with caution. It has also been published on preprint server medRxiv, meaning it has not yet been peer-reviewed.

But interpreting the evidence with caution does not mean it is completely ignored. This study is one of a growing number that tells us we don’t yet know enough about hydroxychloroquine, adding weight to the argument that we should wait for better quality evidence from randomized controlled trials before starting widespread use of a drug with significant effects.

Some small studies have given us reasons to think that chloroquine and hydroxychloroquine could have potential as treatments for COVID-19. In some cases, the findings come from experiments in cultured cells, which won’t necessarily translate directly to using the drugs in sick people. In others, the findings come from small studies with critical flaws, such as using very small groups of patients, having no control group, or excluding patients who died from analysis.

“Normally, such research would be considered hypothesis-generating at best,” doctors Jinoos Yazdany and Alfred Kim wrote in an op-ed in the Annals of Internal Medicine. And they were released at the same time that other early studies found no evidence that these drugs help COVID-19 patients.

However, early hype — including repeated promotion from President Trump — sparked a runaway train of enthusiasm for the drugs. The Food and Drug Administration authorized treatment of COVID-19 patients with chloroquine and hydroxychloroquine despite the lack of good evidence for their efficacy, sparking backlash from former FDA leaders.

These drugs have a range of potential side effects, including serious heart damage. Using it for critically ill COVID-19 patients therefore runs the risk not only of not helping people, but also of actively harming people. The global run on the drugs and resulting shortages are also a problem for patients taking them for conditions like lupus, where they have been shown to be effective.

A series of clinical trials are now underway to determine whether these drugs are actually beneficial. Meanwhile, the FDA authorization means there is a growing pool of data from patients treated with it.

Testing on the fly

The US Veterans Health Administration is a national system of clinics, hospitals and other medical centers. Being one organization, patient data is collected in a consistent manner, making it easier for researchers to compare apples to apples.

In a retrospective study like this, the doctors may have given the hydroxychloroquine treatment only to the sickest patients, in which case we would expect that group to have worse outcomes. There are ways to explain this lack of randomization in the statistical tests researchers use to calculate risks across different groups, but these adjustments require the researchers to figure out what other factors might complicate the analysis — a difficult challenge with a randomized population like this one.

The patients were also not representative of the wider population. They were all men and all over 59 years old, meaning the results wouldn’t necessarily be the same in younger groups or in women.

The results do not mean that hydroxychloroquine is absolutely useless or that clinical trials should be stopped. Recent NIH guidelines for clinicians treating COVID-19 patients say there is currently not enough evidence to recommend for or against hydroxychloroquine treatment, and that remains true.

But they do provide more evidence that suggests we don’t know enough yet to continue using the drugs as a treatment. The study authors acknowledge the shortcomings of their own work, but state that the results nevertheless “highlight the importance of awaiting the results of ongoing prospective, randomized, controlled trials before these drugs become widely used.”