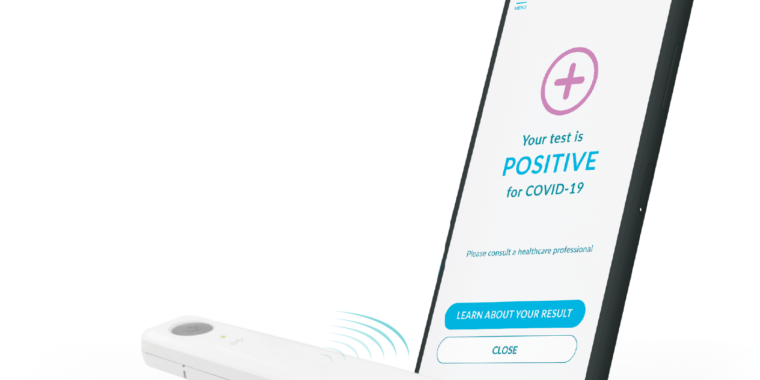 The FDA’s ability to issue emergency use authorizations is not limited to treatments; the administration can also hand them out for medical equipment and testing. And today, it approved the first over-the-counter, at-home SARS-CoV-2 test kit. The kit detects the presence of a protein on the surface of the virus and sends the results to a user’s smartphone via a Bluetooth connection. Although it is less accurate than the diagnostic approaches used by major testing centers, the FDA cited an accuracy of more than 90 percent when issuing the authorization.

This isn’t the first at-home testing kit to be FDA-approved. In November, the FDA issued an emergency clearance to a company called Lucira, which offers a test that requires a prescription. Lucira’s test is based on detecting the virus’s genetic material, using a series of enzyme-catalyzed reactions that operate at room temperature.

The new test comes from a company called Ellume and is based on identifying the presence of one of the virus’s proteins. Usually, these tests rely on the use of antibodies to the protein, usually linked to a chemical that can cause a color change; Ellume tags its antibodies with fluorescent quantum dots. The sample — in Ellume’s case, a swab of material from the nose — flows over the device as it mixes with antibodies, causing a color change at a specific location on the device.

Ellume’s device then converts the color change into a signal that is typically sent via Bluetooth to a user’s mobile phone within 15 minutes. The app will then alert the user and offer to pass the results on to local health authorities. (FDA documents appear to indicate that this reporting is mandatory; we have contacted the company for clarification and will update when we receive it.)

Antibody tests are generally less sensitive than those based on genetics, but Ellume’s data looks good. In individuals with symptoms, it correctly identified 96 percent of SARS-CoV-2 positive cases and produced no false positives. In symptom-free individuals, who generally have a lower viral load, it correctly identified 91 percent of those infected, while producing false positives at a rate of 4 percent. Those numbers sound great, but according to a press release from Ellume, they’re based on a trial of just 198 subjects, so the confidence intervals are probably quite wide.

“Isolate yourself and seek extra care”

The FDA notes that all forms of antibody-based testing have some degree of erroneous test results and that users should treat the results with caution. “The FDA reminds patients that all tests can produce false negative and false positive results,” the authorization document reads. “Individuals with positive results should self-isolate and seek additional care from their healthcare provider. Individuals who test negative and experience COVID-like symptoms should contact their healthcare provider, as negative results do not rule out a person with SARS-CoV-2 infection.”

Based in Australia, Ellume is expanding production there as it seeks to build a US-based capacity. It acknowledges the assistance of a grant from the US National Institutes of Health that enabled the rapid development of COVID-specific tests based on technology it had developed for flu testing.