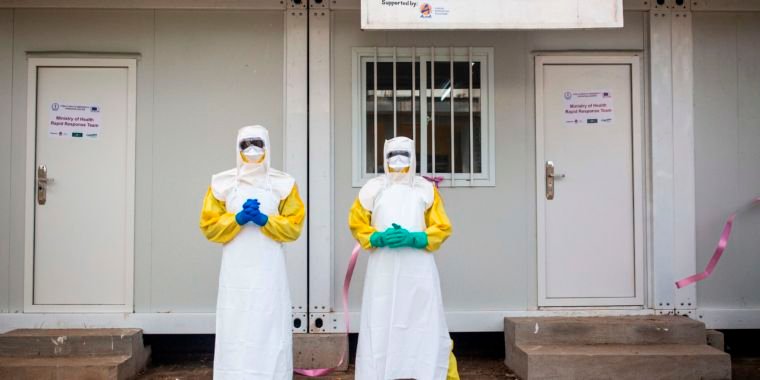 The Food and Drug Administration on Tuesday gave its first-ever approval for a therapy against the Ebola virus disease.

Although the Ebola vaccine, Ervebo, received approval late last year and was found to be 97.5 percent effective in preliminary trials, the newly approved therapy could be helpful in tackling an ongoing outbreak in the Democratic Republic of Congo that began in June. The FDA’s approval may also improve prospects for similar therapies being developed for COVID-19, which may become available before a vaccine.

The newly approved Ebola treatment, called Inmazeb (also known as REGN-EB3), is a combination of three monoclonal antibodies made by Regeneron Pharmaceuticals. The antibodies target the only protein on the outside of the Ebola virus particles, the glycoprotein. Ebola uses its glycoprotein to attach to and invade human cells, causing an infection. The cocktail of antibodies clumps onto the protein, preventing it from entering the cells.

In a 2018-2019 clinical study amid an Ebola outbreak in the DRC’s North Kivu and Ituri provinces, Inmazeb outperformed three other treatments tested side by side. Of the 154 Ebola patients who received Inmazeb, 33.8 percent died after 28 days, compared with 51 percent of the 153 patients who received another experimental antibody. Left untreated, Ebola has an average death rate of about 50 percent, although the death rate between outbreaks can vary widely, from 25 percent to 90 percent.

Ebola has caused 11 outbreaks since it was first identified in the DRC in 1976e outbreak started on June 1 this year in the Mbandaka area of ​​Équateur province and is ongoing. More than 100 people have been infected so far, with at least 47 deaths. the 10e The outbreak that began in North Kivu province on August 1, 2018, was declared over on June 25, 2020 after the outbreak infected 3,470 people, killing 2,287 (a 65 percent death rate). The largest recorded Ebola outbreak was the West African outbreak in 2014, which led to more than 28,000 cases and 11,000 deaths.

“We are incredibly proud that the FDA has approved Inmazeb,” George Yancopoulos, Regeneron’s president and chief scientific officer, said in a press release. He noted that Ebola has “caused a number of deadly outbreaks”.

But the approval comes as Regeneron is in the spotlight for another cocktail of monoclonal antibodies — one that targets the pandemic coronavirus, SARS-CoV-2, which causes COVID-19. The cocktail, which includes two monoclonal antibodies, is still in clinical trials, but was specifically given to US President Donald Trump on a “compassionate use” basis.

Rival pharmaceutical company Eli Lilly is also developing an antibody therapy against COVID-19, although the trial was recently interrupted for a safety review.

Trump has touted the antibodies as a “cure” despite insufficient data to support the claim. The only publicly available data on the efficacy of Regeneron’s cocktail comes from a Sept. 29 press release showing that SARS-CoV-2 levels decline more rapidly in infected patients who were not hospitalized because of their infection.

Nevertheless, Regeneron has requested the FDA to issue an Emergency Use Authorization for the cocktail’s use during the pandemic, as did Lilly. The FDA’s approval of Regeneron’s Ebola antibody cocktail may bolster optimism that the FDA will issue EUAs.

“As we apply the same advanced technologies and manufacturing capabilities against COVID-19, we hope this will be one of many demonstrations of how the power of science can be successfully harnessed against dangerous infectious diseases,” Yancopoulos said in the press release.