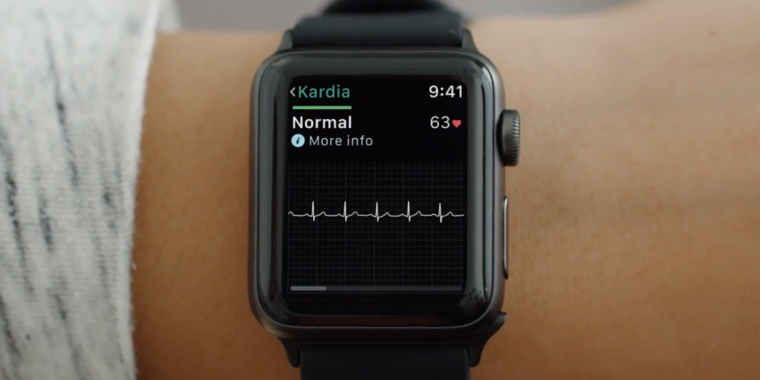 Plenty of studies boast of the Apple Watch’s medical capabilities, but Apple’s wearable is a consumer device, not a medical device. However, the FDA just announced approval of the first Apple Watch medical accessory, AliveCor’s KardiaBand, which uses the wearable’s heart rate technology and a connected sensor to provide ECG readings on the fly. An Apple Watch paired with a KardiaBand can give users an EKG reading in 30 seconds, detect abnormal heart rhythms and atrial fibrillation, and send that information to a doctor for further analysis.

The $199 device is a modest black band that attaches to the Apple Watch like other band accessories. On the band directly below the Apple Watch module is the KardiaBand’s silver sensor where users place their finger to read. The Apple Watch’s display shows the data from the measurement using a line graph similar to how the Apple Watch displays other heart rate data, informing the user whether their heart rate is normal or abnormal.

AliveCor’s new SmartRhythm technology offers a more personalized approach to the prevention technology already on the Apple Watch. Currently, Apple’s wearable can alert you when your heart rate spikes, but SmartRhythm uses AliveCor’s deep neural network and your history of heart rate data to determine a healthy and normal heart rate range for you in relation to your activity level. If an abnormality is detected during the continuous measurement of your heart rate by the Apple Watch, the AliveCor and KardiaBand apps will prompt you to take an ECG measurement. The watch’s display will then show the normal heart rate range that KardiaBand’s technology has estimated for you, the detected abnormal heart rate, and where the ECG value falls in relation to that data.

The KardiaBand isn’t AliveCor’s first medical device. The company already sells KardiaMobile, a small, rectangular ECG reader that pairs with a mobile app that lets users take quick ECG readings by placing two fingers on their sensor on the device. The KardiaBand makes this technology more discreet by making it a tiny sensor that clips into an Apple Watch band, making it accessible anytime, anywhere. ECG readers similar to KardiaMobile have been around for a while, but the KardiaBand is the first medical accessory to be FDA-approved for use with an Apple Watch.

The KardiaBand is relatively accessible at $199, and users can email and print EKG recordings at no extra cost. However, users must pay $99 per year for AliveCor’s premium program if they want access to unlimited cloud storage and history, custom monthly reports shared with their doctor, and other benefits.

The FDA has made an effort to work with technology companies that want to make it easier to produce devices and software that allow consumers to monitor their health. Recently, Apple, Fitbit, Samsung, and Johnson & Johnson were announced as just a few of the companies participating in the FDA’s pilot pre-certification program under the Digital Health Innovation Action Plan. All companies involved in this program will help the FDA create guidelines for approving health and medical software that devices can use. Rather than approving and further monitoring individual devices, the FDA seems more interested in the software that runs on these devices. The FDA will likely continue to scrutinize AliveCor’s software for KardiaBand and any other consumer wearables it makes going forward.