Fate of the Furious might be fun, but it hurt me |Techilink 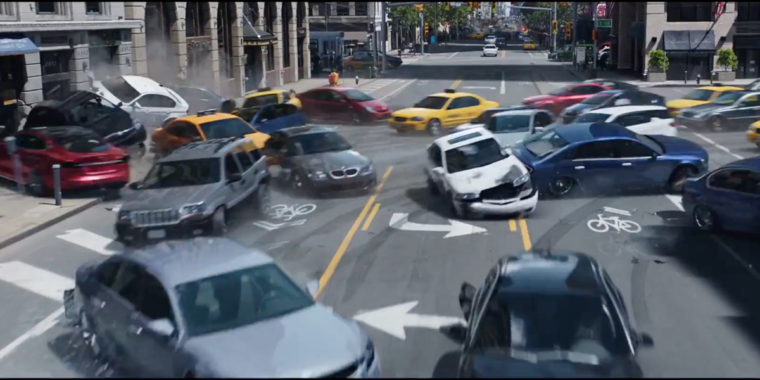 The following article contains some spoilers for Fate of the Furious.

Around the . to celebrate The Fate of the Furious— and the ridiculous rides that characterize the franchise — we shot a video of the world’s most expensive hypercars. But while there’s a lot to like about the new movie for car enthusiasts, at times it left my brain ready to blow a gasket.

Elsewhere on the pages of this site, my colleague Annalee Newitz praised rather exuberantly The Fate of the Furious, the eighth and most recent installment in the “Vin Diesel drives black muscle cars” franchise. She rightly points out that the series has evolved over the years from its beginnings as “undercover cops fighting crime in illegal street races” towards “secret agent techno-ninja” fare. That shift has inevitably led to comparisons to another franchise that for many is the epitome of cool cars and thrilling chases, James Bond. I think that’s appropriate, but not necessarily in a good way; when I left the theater I felt very much like I had after 2002 Die another day: confused.

Die another day also characterized by a long chase on ice. But his invisible Aston Martin crossed the line of my suspension of disbelief, a feat that The Fate of the Furious managed repeatedly. Die another day was the first Bond film to abandon the series’ dedication to real-life stunts as CGI began to come into its own. After all, why risk a stunt team when there are much more spectacular – if completely impossible – action sequences ready to be visualized in the render farm?

Take the opening race in Cuba. Dom’s 1951 Chevrolet Fleetline rustbox—the slowest car on the island, as its cousin puts it—can’t keep the heat off its last-minute tuning. With the turbo glowing and the windshield on fire, our brave bald hero’s chances seem lost. No problem, Dom thinks; I turn the car into a fast 180, put it into reverse and back up across the finish line. There’s a good time when Dom makes a new friend and replaces his cousin’s now-destroyed junk. But unlike the now-crashed Fleetline, my brain never reached the checkered flag. Even with my limited mechanical aptitude, I know that reverse is always a short gear, and Toretto’s day should have ended with his car slamming pistons through the engine or his clutch shattered.

Then there are the self-driving cars. The movie definitely gets full marks for topicality, even if it felt like my day job was interfering with my trip to the multiplex. And sure enough, I’ll buy the nefarious super-hacker Cipher (played by Charlize Theron) who can “zero-day” hundreds of autonomous vehicles at once and send them after the good man in a scene more reminiscent of a tsunami fleeing or landslide than a chase. Dom escapes to drive another quarter of a mile.

But somewhere I’m left in the carnage and crushed metal, wondering about the chain of events that must have occurred in this alternate universe. On Earth Prime (that’s here), it’s 2017 and the only cars I can think of that can be recalled (short-haul) remotely are some BMWs and some Teslas. In the Lot universe, even knockers from the early and mid 2000s can control themselves! (And don’t get me started on a fully remote-controlled submarine…)

Maybe I should count my blessings. After all, in exchange for a few dollars and my intellectual dignity, I got to see an array of exotic vehicles on the big screen. (All the really cool stuff was in the background of the warehouse scene.) And it’s not like the series hasn’t taken things beyond gullibility in the past. Don’t mind the time loops and retcon needed to get the overarching plot out of a Tokyo Drift-shaped hole, I’m talking about the endless runway in Fast and furious 6 and ‘s skyscraper-hopping Lykan Hypersport Furious 7 (seen in the video above). Besides these kinds of stunts, who am I to bicker about realism?