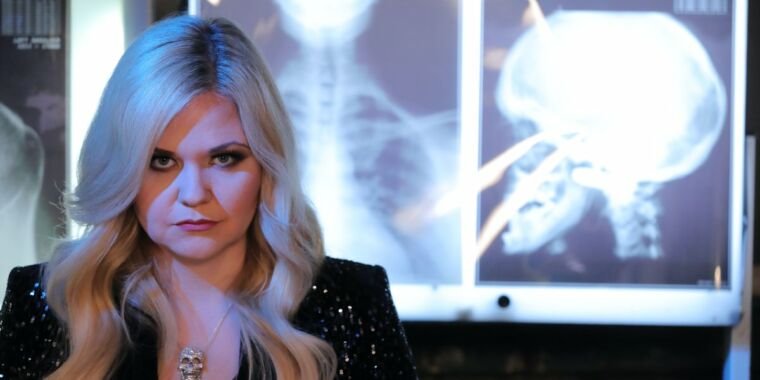 Notorious historical cold cases get a scientific facelift The Curious Life and Death of…, a new documentary series from the Smithsonian Channel. Hosted by author and medical historian Lindsey Fitzharris, each of the six episodes takes a fresh look at a famous death with a mystery attached to it, and sifts through the scientific evidence to (hopefully) arrive at new insights.

According to the official synopsis:

Author and medical historian Dr. Lindsey Fitzharris will use science, testing and demonstration to shed new light on famous deaths ranging from drug lord Pablo Escobar to magician Harry Houdini. dr. Fitzharris uses her lab to perform virtual autopsies, experiment with blood samples, interview witnesses and give real-time demonstrations. She will put everything about these mysterious deaths to the test. Along the way, she’s joined by a varying cast of experts, including Scotland Yard detectives, medical examiners, gun gurus and more.

A well-known science communicator with a great follow twitter and a penchant for the medically macabre, Fitzharris published a biography of surgical pioneer Joseph Lister, The butcher’s artin 2017. (It’s a great, if at times creepy, read.)

“I was a strange kid and I grew up to be a strange adult,” Fitzharris told Ars. “I have always been fascinated by the past and by death.” As she says in the trailer (embedded above), “I think the way people died tells us a lot about how they lived.”

Fitzharris has found that even people who usually don’t like history are fascinated by medical history, and that has become her brand, so to speak. “The space I’m trying to fill is: What would happen if you had a toothache in 1792 or broke your leg in 1845?” she said. That brand caught the attention of the Smithsonian Channel, which offered Fitzharris to host their new series. She is joined on the show by former New Scotland Yard detective Brian Hook, as well as forensic chemist Raychelle Burks and forensic pathologist Judy Melinek when their specific expertise is needed.

Midway through production, the coronavirus pandemic struck and the series was shut down for a few months. In the end, the team was able to make the necessary new footage while taking all of the recommended precautions, although Fitzharris admits the experience was a little scary.

Each episode focuses on a famous death that still holds a mystery to the deceased, and over the course of the episode, Fitzharris and her team revisit the evidence, conduct their own experiments, and ultimately come to a judgment based on their findings. . Each episode also features small side segments called “Curious Case Files” to delve deeper into smaller, quirky historical details, such as the urine wheels that medieval doctors often used for diagnosis, or the legend of the chef aboard the Titanic whose blood alcohol level was so high that he miraculously survived the icy waters after the ship sank. ‘I wanted to bring that kind of weird history’ [to the show],” she said.

There is a mix of historical and contemporary cases, of Lizzie Borden, Harry Houdini and the ‘Unknown Child’ who died aboard the Titanic, to Rolling Stones co-founder Brian Jones, actress Brittany Murphy and Colombian drug lord Pablo Escobar. The Borden case is, of course, very famous, and although Lizzie was acquitted, there have always been questions as to whether she was actually guilty. Fitzharris gets physical in the segment, takes a small ax to a ballistic gel body, then analyzes the damage and blood spatter with Hook’s help.

“They’re fantastic — they react just like human bodies,” she said of the synthetic cadavers, confessing, “It was much harder to break through the skull than I could have imagined.”

I won’t spoil the “verdict”, but while Fitzharris takes her own stand, she acknowledges that there is very little surviving forensic evidence, as the murders were committed in 1892. “People will debate this until the end of time,” she said. “But one of the things that bothers me about Lizzie Borden is that when she died she requested that her body be buried next to her father, and in fact it is. So if she did [the murders]That’s a very uncomfortable level of psychopathy.”

The relative recency of Brittany Murphy’s tragic death in 2009 presented a different kind of challenge. “I’m a historian used to dealing with the very dead, not the recently deceased, and I wanted to make sure we did this in a respectful way,” Fitzharris said.

There’s more of an unmasking emphasis in the Murphy episode, including a revealing interview with Murphy’s mother-in-law. “There were so many conspiracy theories that started popping up because she died under very strange circumstances,” Fitzharris said. “And her husband died just a few months later under almost identical circumstances in the same house, in the same room.” She hopes the episode will help put those crazier theories to rest.

It remains to be seen whether The Curious Life and Death of… is getting a second season, but if it does, there are plenty of other famous cases that Fitzharris would love to revisit, such as Old West outlaw Jesse James, or the labyrinthine conspiracy theories surrounding the 1963 assassination of President John F. Kennedy. – assuming that she can discover new knowledge or a new angle.

“I’m not shocked that people are drawn to stories like this even today,” Fitzharris said of the human tendency toward morbid curiosity, especially when it comes to shocking deaths. “We’re not really exposed to death the way we once were, so there’s a natural curiosity about it. We’re drawn to shows like this for that reason. But I hope it’s more than just your typical true-crime show.” “It’s a little bit of forensic science, a little bit of real crime, a little bit of weird history. And hopefully we can paint a much more nuanced picture of each of these things.”

New episodes of The Curious Life and Death of… airs Sunday nights at 9 p.m. on the Smithsonian Channel through October 11, 2020. Episodes that have already aired can be streamed on Amazon Prime.