Failed Excel import may have resulted in loss of 15,841 UK COVID-19 cases | Techilink 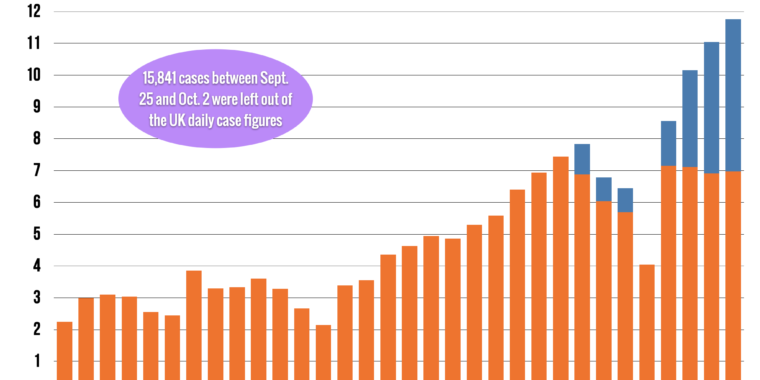 Public Health England admitted on Sunday that the agency has underreported 15,841 cases of COVID-19 infections in recent days due to a “technical problem”. The missing positive tests were conducted between Sept. 25 and Oct. 2 and have since been added to national statistics, the agency said.

PHE did not explain the nature of the technical problem, but a number of UK news sources have pointed the finger at Microsoft Excel. Here’s how the Guardian describes the problem:

PHE was responsible for collecting test results from public and private labs and publishing daily updates on the number of cases and tests performed.

In this case, The Guardian understands, a lab had sent its daily test report to PHE in the form of a CSV file – the simplest possible database format, just a list of values ​​separated by commas. That report was then loaded into Microsoft Excel and the new tests at the bottom were added to the main database.

But while CSV files can be any size, Microsoft Excel files can only be 1,048,576 rows long. When a longer CSV file is opened, the bottom rows are truncated and no longer displayed. That means, after the lab ran more than a million tests, it was only a matter of time before the reports couldn’t be read by PHE.

The agency says it will take precautions to ensure that such an error does not occur in the future.

In addition to underestimating the number of COVID cases in official statistics, the glitch also hampered contact tracing efforts, as data on the missing positive tests was not passed on to contact tracers. Officials stressed that the subjects themselves got their test results as normal.

The UK is currently in the midst of a second wave of coronavirus infections. Infections in the country peaked in April and then dropped to several hundred a day in July. But the number of cases has skyrocketed in the past month and in recent days the UK has reported more than 10,000 new cases a day (including the previously missing cases). That’s about as much as the US per capita.

Update (1:25 am): The BBC offers another Excel-related explanation for the error:

PHE had set up an automated process to aggregate this data into Excel templates so that it could then be uploaded to a central system and made available to the NHS Test and Trace team and other government computer dashboards.

The problem is that the PHE developers chose an old file format for this – known as XLS.

As a result, each template could only handle about 65,000 rows of data instead of the more than a million rows that Excel is actually capable of.

And since each test result created several rows of data, in practice this meant that each template was limited to approximately 1,400 cases. When that total was reached, further matters were simply left out.