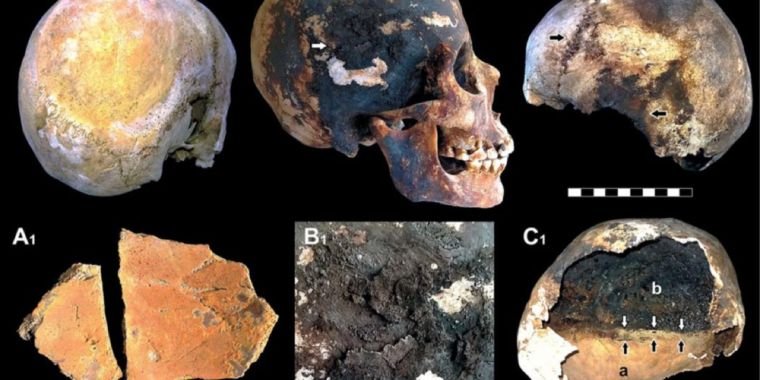 The catastrophic eruption of Vesuvius in AD 79 wiped out several nearby towns and killed thousands of people. For a long time it was believed that the vast majority died of asphyxiation, suffocating in the thick clouds of noxious gas and ash. But a recent paper by Italian archaeologists concludes that at least some of the Vesuvian victims died instantly from the intense heat of fast-moving lava flows, with temperatures high enough to boil brains and detonate skulls.

As bioarchaeologist Kristina Killgrove points out to Forbes, this new analysis, led by Pierpaolo Petrone of the University of Naples, builds on the Italian team’s short 2001 article in Nature. This is when they first fueled their hypothesis, noting that the body positions of many victims, excavated in waterfront chambers in the city of Herculaneum, near the foot of Vesuvius, showed signs of thermal shock. There were telltale bent body parts, such as curled toes and charred bones, suggesting sudden death from a burst of extreme heat.

It is estimated that the eruption of Vesuvius released 100,000 times the thermal energy of the atomic bombs dropped on Hiroshima and Nagasaki in 1945, ejecting many tons of molten rock, pumice and hot ash over the course of two days. In the first phase, immediately after the eruption, a long column of ash and pumice covered the surrounding cities, especially Pompeii and Herculaneum. By late night or early morning, pyroclastic flows (fast-moving hot ash, lava fragments, and gases) moved through and destroyed what remained, leaving the victims’ bodies frozen in a seemingly suspended action.

The only surviving eyewitness account is that of Pliny the Younger, who wrote two letters to his friend, the historian Tacitus, describing the catastrophic event. He described “broad flames” visible from Mount Vesuvius and a shower of ash that covered the area like snow. He and his uncle, Pliny the Elder, also witnessed a dense cloud “filled with earth and embers” rising above the mountain like a fir tree, “for it shot up to a great height in the form of a tall trunk, extending spread out at the top as in branches.”

Archaeologists have made casts of the impressions left by victims’ bodies in the ash deposits around Pompeii (about 1,044) and collected bones from another 100 victims. Just over a third are said to have died from collapsed roofs or falling rocks. Archaeologists have also found the remains of about 332 bodies in the ash deposits at the Herculaneum site, which is closer to the crater than Pompeii, likely killed by the pyroclastic waves.

Most scientists assumed that Pompeii’s victims were not killed by falling debris suffocated by the thick clouds of ash and gas, believing that the temperatures of the material spewed by Vesuvius would not be hot enough. to cause outright death. There was good reason to think so, given the condition of the bodies, the outline of the clothing still visible on some. But a 2010 study by volcanologists estimated that temperatures from the pyroclastic wave that devastated Pompeii could have been as high as 572°F, killing the population in fractions of a second. “The twisted postures are not the result of long suffering, but of the cadaveric cramps, a result of heat shock on corpses,” said lead author Giuseppe Mastrolorenzo. National Geographic at the time.

The victims at Herculaneum appear to have suffered a similar horrific fate, according to Petrone and his colleagues. Archaeologists believe the coastal town used to contain boathouses, given the overhead crossbeams and vaulted vaults in the rooms. They suspect that those who couldn’t evacuate in time took shelter from the open beach in the boathouses, but were caught in the dense, hot currents that swept the city away. Those roughly 100 skeletons were removed for lab analysis in the 1980s. (There are fiberglass reproductions on the site itself for tourists to get an idea of ​​the impact.)

Petrone and his colleagues were intrigued by the strong red and black remains on some of the bones that couldn’t have come from coins or other metal artifacts, as none were near this particular site. They used Raman microspectroscopy to analyze samples for iron and other blood residues. There was a very high concentration of iron, most likely from the victims’ bodily fluids, although they could not say for sure that the source was human blood.

Most of the bones were also broken — another indicator of sudden extreme heat exposure. They especially noted “cracking and explosion” of the skullcaps of many of the skeletons, consistent with forensic cases of skull cracking, when “extruded brain matter can form a circular pattern around the head.” Essentially, the hot pyroclastic currents boiled the soft brain tissue and vaporized the hapless victims’ bodily fluids, raising the internal pressure so much that the skulls literally exploded.

That’s not a pleasant way to go to say the least. But maybe it was faster than choking to death.