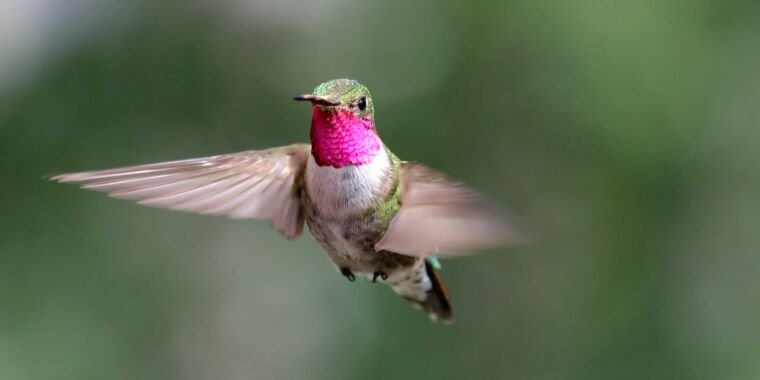 The phrase “every color of the rainbow” isn’t as all-encompassing as it sounds. For starters, the color chips in your hardware store’s paint path contain some colors that are hard to pinpoint in an actual rainbow. But even on a less splitting level, Purple missing from that rainbow.

The “V” in “ROYGBIV” stands for violet, of course, but it’s not the same as purple. There is no purple wavelength of light – it requires a mixture of both red and blue wavelengths. That makes it a “non-spectral color” — in fact, it’s the only non-spectral color humans see. It requires our brains to interpret signals from both red-sensitive and blue-sensitive cones in our eyes and see that as a separate color.

But while humans have three types of cones (which makes us “trichromatic”), many creatures have four, extending their visible spectrum to ultraviolet (UV) wavelengths. In theory, this means they may be able to see additional non-spectral colors that we humans have a hard time imagining: UV mixed with red, yellow, green, or purple. So… do they?

There has been some research on bees showing that they see UV+green as their own color (referred to as “bee-purple”), but otherwise there is not much experimental evidence. A team led by Mary Stoddard of Princeton decided to test the idea by leveraging hummingbirds’ love of sugar water feeders.

Working in Colorado for several summers, the researchers set up a few feeders for their experiments — one with that delicious sugar water and one with plain boring old water. On top of each was a special LED light with UV, blue, red and green LEDs behind a diffuser, which allowed the researchers to illuminate the feeder in a variety of non-spectral colors.

The researchers watched wild broad-tailed hummingbirds visit and recorded which feeder they flew to first. After a certain number of visits, the feeding positions would be switched so that the birds couldn’t just return to the same spot once they found the sweet stuff. The idea was that they would use the color of the light to identify the feeder on return visits. They couldn’t track individual birds individually, but based on some streaking, they estimate the local population at 200 to 300 (depending on the year). In total, they recorded more than 6,000 hummingbird visits.

The experiments pitted different pairs of colors together. There were a few control runs where both lights showed the exact same color and a few experiments where red versus green was tested. From there, the differences became more subtle and depended on distinguishing non-spectral colors. Most involved different mixtures of UV and another color – in the same way we could distinguish between a reddish-purple and a bluish-purple.

The tests showed that the birds could see any non-spectral color the researchers threw at them. Color pairs closer to each other in hue resulted in more erroneous visits, but still beat the 50/50 chance of the control experiments.

As an extra plausibility check, the researchers scanned databases of precisely measured colors that occur in plants and birds. These non-spectral colors are quite common in nature, accounting for 30 percent of bird plumage colors and 35 percent of plant colors in the databases. So it certainly would make sense that hummingbirds (and other birds) could see these colors in their environment.

And the researchers think this study can be generalized beyond just the broad-tailed hummingbirds that volunteered to do it. Many things are poorly understood about the vision physiology of different bird species, let alone the neural processing of signals from those color cones in the eye, but what we do know suggests that hummingbirds are likely representative. “While these experiments were conducted on hummingbirds,” the team writes, “our findings are likely relevant to all diurnal, tetrachromatic birds and likely to many fish, reptiles and invertebrates.”

But they also note that it is difficult to get inside the little heads of these critters and understand what this experience is like. “Even if the neural mechanisms for color vision were clear, and even if color mixing experiments testify to tetrachromy in birds,” they write, “we still cannot answer the more philosophical question of how non-spectral colors appear.” for birds does UV+green appear to birds as a mix of those colors (analogous to a double-stop chord played by a violinist) or as a sublime new color (analogous to a completely new tone as opposed to the components)? We can’t say that.”