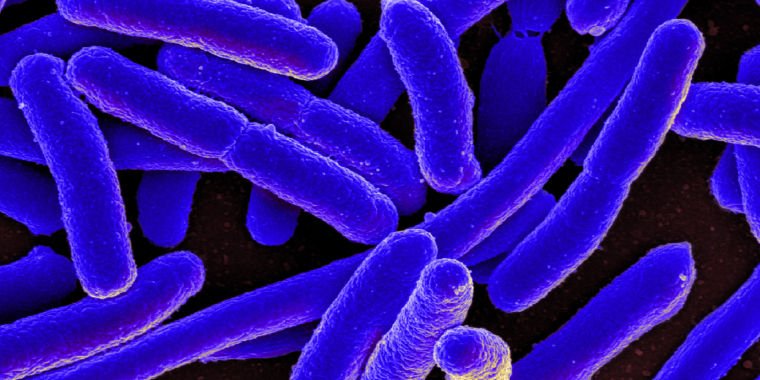 On February 24, 1988, Richard Lenski seeded 12 flasks with E coli and let them shake overnight at 37ºC. But he sowed them with only enough nutrients to grow until early the next morning. Since then, he (or someone in his lab) has taken 100 microliters of each bacterial solution every afternoon, put it in a new flask of fresh growth medium, and put the new flask in the shaker overnight. Every 75 days – about 500 bacterial generations – part of the culture goes into the freezer.

The conditions of famine are strong pressures for evolution. And the experiment contains its own time machine to follow that evolution.

The crucial piece of technology that makes this experiment possible is the -80ºC freezer. It essentially works, says Lenski, like a time machine. The freezer keeps the bacterial cultures in a state of suspended animation; when thawed they are fully viable and their condition can be compared to that of their more highly developed offspring vibrating in their cobs. By way of analogy, imagine that we could challenge a humanoid from 50,000 years ago to a hackathon. (Which she would probably win, because of the paleo diet.)

So cool, right? The MacArthur Foundation thought so too: It gave Lenski a grant in 1996, all the way back to a generation of about 17,000. The experiment is now at generation 68,113 (approximately).

The bacteria were kept in the same medium – the same environment – during the course of the experiment. Their food source is glucose, which is calibrated to decrease over the 24 hours before moving on to the next flask. This dwindling food supply is the only selective pressure the bacteria experience.

The competitive fitness of all 12 cultures has improved over time; the cells are larger than at the beginning of the experiment, they use glucose more efficiently and they grow faster. The rate of improvement decreased over the course of the experiment, but the rate at which genetic mutations arise did not.

The 12 populations tend to get mutations in the same set of genes, but they don’t get the same mutations within those genes; they each find their own path to the same goal of optimal fitness, just as climbers each find their own path to the same summit. And while the rate of mutation has slowed, it hasn’t stopped. So Lenski concludes that even in their simple, relatively static environment, and even after 68,113 generations, there are still molecular adaptations the bacteria can make to get fitter.

After about 20,000 generations, one of the 12 cultures developed the ability to survive by eating citrate in addition to glucose. It has remained the only one of the 12 to develop this ability and over time it became less able to handle glucose as an energy source. Since the inability to metabolize citrate is a kind of characteristic of E coliare these guys even E coli Lake? Or a new species?

It’s not just the fitness of today’s bacteria that can be compared to their ancient unfrozen ancestors. Lenski sequenced the genomes of each frozen culture so he can untangle the dynamics of evolution at the molecular level.

Six of the 12 initial populations have become hypermutators. They picked up early mutations in genes that control DNA repair, allowing them to build more mutations in the rest of their genomes. These bacteria go through periods of molecular evolution that yield leaps in their degree of genetic diversity. The other six populations are non-mutators; these guys collect mutations at a much more stately pace. The citrate-eating species started out as a non-mutator, but once it gained the ability to exploit a new food source, it began to mutate more quickly to refine its new ability.

The length of time each mutation lingers sheds light on the selective forces at play. It doesn’t seem like one beneficial mutation emerges at a time and rampages through a population. Rather, a pair occur in quick succession and these compete for dominance. But one does not always win; in most populations, the mutations separate into groups, creating different subcultures in each flask. These subcultures have a tenuous coexistence, with their relative abundance shifting over time.

Random, stochastic mutations allow species to diversify. But selective pressure pushes them towards equality, forcing them to thrive under restrictive conditions. The 60,000 generations of E coli already in the freezer of Richard Lenski have begun to show how these opposing forces shape evolution; who knows what the next 60,000 will reveal?