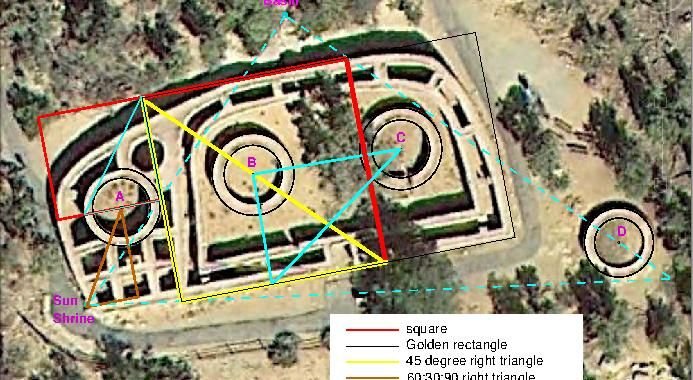 A millennium ago, the Pueblo peoples built incredible monuments and cities in the US Southwest. One of the most impressive structures they left behind is the Temple of the Sun, in what is now Mesa Verde National Park in Colorado. Likely the venue for meetings and ceremonies, the Sun Temple is a huge D-shaped building with walls that once stood 12 to 15 feet (3.5 to 4.5 meters) high. Now an applied mathematician has discovered something intriguing about the proportions used to construct the temple and its internal structures.

Physicist Sherry Towers is part of the Mathematical, Computational, and Modeling Sciences Group at Arizona State University, and she occasionally takes time away from physics to focus on how mathematical patterns shape the social world. She became interested in the location of the Sun Temple because many archaeologists believe the structure could reveal whether the Pueblo peoples used it for astronomy. But as Towers pored over satellite images of the area from Google Maps, the general shape of the Sun Temple continued to grab her attention. “I noticed in my site research that the same measurements keep popping up,” she said in a release. “Seeing that the layout of the main features of the site also included a lot of geometric shapes, I decided to take a closer look.”

What she found was twofold. First, it seems that the Sun Temple was built with a common unit of measurement, which is about 30 cm. This is a fascinating discovery in itself, because we have no evidence that the Pueblo peoples had a written language or a number system. In a recent article for Journal of Archaeological Science Reportswrote Towers that the major structures at the site—namely, the retaining wall and four round, tower-like “Kivas”—”were laid out with remarkable precision, with relative measurement uncertainty estimated at about one percent.”

Even more unbelievably, she also discovered that “the main features of the site were apparently laid out using the golden rectangle, squares, 45◦ triangles, Pythagorean 3:4:5 triangles, and equilateral triangles.” She added that the “Sun Temple site is thus probably the first evidence of advanced knowledge of various geometric constructions in prehistoric America.” Although ancient peoples in Greece also used the golden rectangle in their constructions, this would be the first evidence for a similar geometric structure in pre-contact America. It means that the urban layouts of the Pueblo peoples, which included cities carved into rock walls and a voluminous reservoir system, were aided by an advanced understanding of geometry.

Many archaeologists are hesitant to make such claims because it is difficult to know whether these shapes were intentional or not. Towers explained that she is also suspicious of this, but remains confident in her discovery:

Some individuals have conducted pseudoscientific studies of geometric layouts of archaeological sites, and this has unfortunately led to a cachet of “woo science” associated with any research in this area…for example, in several studies providing evidence of associated geometric layouts featuring prehistoric sites in the Southwest (often associated with New Age theories), the author has noted that geometric shapes of arbitrary size are simply superimposed over a map of a site, regardless of whether the shape’s vertices, sides, or size whether or not are meaningfully associated with one of the key features of the site… Thus, to ensure accuracy in our analysis, we only examined potential geometries related to the size of key features such as the four kivas and the outer D, or geometries related to measures between at least two of the interests richest features. We also presented only results that could be independently verified by interested readers using aerial imagery available with software programs such as Google Earth, and assessed the statistical significance of the apparent geometries we examined.

More research is needed to substantiate Towers’ claim, but she has taken the first important step. She hopes scientists can continue studying other ceremonial structures built by the Pueblo peoples, such as New Mexico’s Chaco Canyon, which may have been built using the same standard unit of measurement she discovered in the Sun Temple.