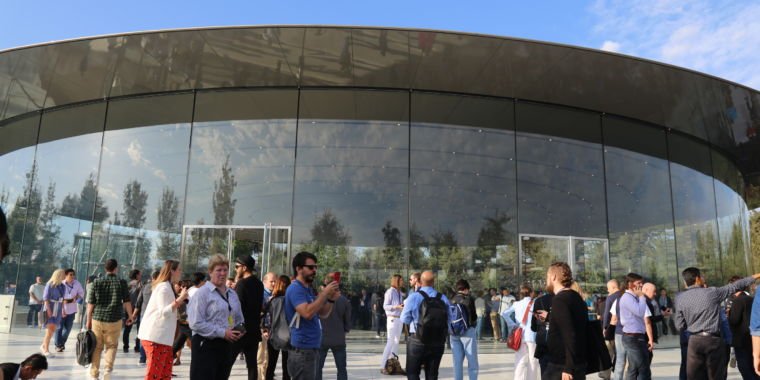 Update: Today, March 25, Apple will hold its first public event of 2019 at 1 p.m. ET (10 a.m. PT). And press invites, rumors and past evidence indicate that this event could be an unprecedented announcement for the company: its highly anticipated streaming content business. Ars will be on site Monday to find out and live blogging, but for now we’re popping up again with our rundown of what to expect from Apple this week and what surprises await us. This story originally ran on March 15, 2019 and appears unaltered below.

On March 25, Apple executives and partners will take the stage at the Steve Jobs Theater on Apple’s Cupertino campus to discuss subscriptions, software, services, entertainment and media. These are all things Apple has dealt with before, but never before has an event been so fully focused on them as we expect later this month.

That’s not to say it’s impossible for hardware to show up. The timing is right for an update to Apple’s base iPad model, and reports and rumors are accompanied by beta evidence from developers to imply that hardware upgrades are imminent for a few Apple products like the iPad, iPad mini, iPod touch and AirPods. These would fit perfectly into an event focused on services like TV, music and news: they are primarily media consumption devices.

But this will be Apple’s first public event after it reported a marked decline in global iPhone sales, alarming experts, analysts and investors that the iPhone hardware-dependent company is facing difficult times. It’s fitting (and perhaps telling) that the event will focus on services — the division Apple is most pleased with right now — rather than hardware.

Of course, you should be skeptical if you read hot takes on the internet claiming that Apple is doomed because iPhone sales have fallen mainly in China. It’s not good news, but other companies would do anything to maintain the financial and market position that Apple has in most of its global business interests, even with that rare sign of weakness.

I write “most” because Apple is actually lagging significantly behind in the area I expect the March event to put the most emphasis on: television.

The iTunes Store is a relatively successful platform for purchasing TV series episodes, but many people today prefer to watch TV shows that come as part of a streaming subscription bundle such as Netflix, Hulu, or Amazon Prime. And while we generally liked the Apple TV 4K as a hardware media streaming solution when we reviewed it, Apple’s market share in that space isn’t impressive. The cheaper, more accessible, less closed-off Roku platform dominates. Not to mention that many of today’s TVs come with Netflix and the like built in, and more than half of American households have video game consoles with enough libraries for video streaming apps.

But the same story arose for music on iTunes before Apple launched the wildly successful Apple Music service. Could the same thing happen again with television or with news? And what do we know about the new iPads that may or may not be announced? Let’s explore both the final and the possibilities at the Apple event on March 25.

A streaming TV service from Apple

The television industry fits the classic profile as a dilapidated industry poised for the kind of tech house-flipping that has led to Apple’s greatest successes before. With the iPod, iPhone, Macintosh, AirPods and other popular products, Apple has identified product categories that showed promise but were severely hampered by short-sighted design decisions or industry fragmentation. Television service is one such product.

Television networks are the definition of dinosaurs. Their business models and technologies are archaic and threatened by newer innovations. And thanks to near-monopolies of local cable providers, poor bargaining power with those network cable providers, bloated subsidies for content like ESPN that not everyone wants, and icy innovation, the user experience for cable television services is almost universally awful right now — and it’s badly priced, too. .

It’s fitting that the TV industry itself, in which I’ve worked before, calls streaming services “OTT” – “over the top.” Look in the name there: The only way to produce a good user experience is to skip the entire infrastructure that the industry has built and monopolized for decades.

Apple’s efforts with Apple TV only illustrate how bad the situation is. Even Apple, with its powerful bargaining power, couldn’t get the whole industry behind the Apple TV 4K to build a good solution on top of the various streaming services. The channels all use different technologies, they don’t play well together, and their secretive and exclusive deals with cable providers mean Apple can’t guarantee a universal experience for all of its Apple TV users. Furthermore, the vicious grip of cable providers is suffocating the networks trying to break the ranks of the status quo.

A popular biography of former Apple CEO Steve Jobs by Walter Isaacson revealed that this TV problem haunted Jobs the most as he approached his final days as a director of the company. He was obsessed with solving it, the same way iTunes handled a similar mess in the music industry in the early 2000s.

This month’s Apple event carries the tagline “It’s show time” — a tagline used years ago for an event where Apple first announced its future Apple TV product. Apple’s current leadership seems to believe that the work that Jobs started has been completed.

But while previous efforts have looked to work closely with networks to simply provide a better technical platform for distributing those networks’ existing content, the new service is more like Amazon Prime Video: a machine with original content augmented with licensed content and add-ons from premium channels such as Starz or HBO Now.