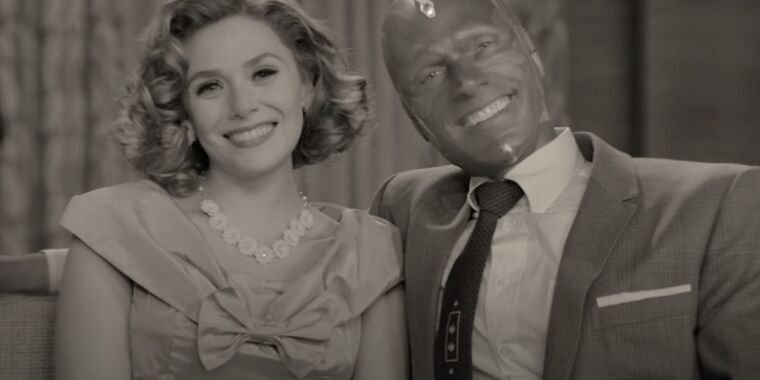 If you were watching the virtual 72nd Primetime Emmy Awards last night, you’ve no doubt seen the debut of a new trailer for WandaVision, the first standalone series to be released in Phase Four of the MCU. The studio offered a sneak peek at D23 Expo 2019, Disney’s annual fan extravaganza, last year. Lacking any real footage, that teaser was just snippets of The Dick Van Dyke Show interspersed with clips of the Scarlet Witch (Elizabeth Olsen) and Vision (Paul Bettany) from the various MCU movies. At the time I was skeptical about the concept, but this new trailer is very promising and gives me hope that Marvel can pull it off.

WandaVision is intended to be a sort of sitcom/epic superhero mashup, with Kat Dennings reprising her role as Darcy from the Thor movies, besides Randall Park that are Ant Man and the Wasp role as FBI agent Jimmy Woo. Kathryn Hahn (crossing Jordan) plays a “curious neighbor”, and Teyonah Parris (crazy men) plays an adult Monica Rambeau, daughter of Carol Danvers’ BFF Maria Rambeau, introduced in Captain Marvel† Within the MCU timeline, it takes place after the events of: Avengers: Endgameand the events will align directly with Doctor Strange in the Multiverse of Madnesscurrently slated for release in 2022.

According to the official description: “WandaVision will follow the story of Elizabeth Olsen and Paul Bettany’s superheroes, the Scarlet Witch and Vision. The series is a mix of classic television and the Marvel Cinematic Universe in which Wanda Maximoff and Vision – two super-powered creatures living idealized suburban lives – begin to suspect that all is not as it seems.”

At last fall’s New York Comic-Con, Tom King said the show would draw on King and Gabriel H. Walta’s 2016 limited-edition comic book series, The vision† In that storyline, Vision “creates” a wife and two children and settles into a seemingly idyllic suburban life in Washington, DC, but things soon take a dark turn. (There’s also a comic strip arc where Wanda creates a world for everyone to indulge in, so reality distortion is definitely one of her canonical powers.) The studio also released a few set shots earlier this year that confirmed rumors that WandaVision would feature the live-action debut of SWORD (the Sentient World Observation and Response Department), a division of SHIELD charged with dealing with alien threats to Earth.

The trailer opens in the style of a healthy 1950s family sitcom, with The Platters’ “Twilight Time” playing in the background. (Side note: this song will forever drive me crazy after it was used in 1998 The X files episode “Kill Switch”, co-written by none other than William Gibson.) “This is our home now. I want us to belong,” Wanda tells Vision, and voila! He suddenly has a more human appearance, just in time for dinner with the neighbors. But they find that they can’t answer even the simplest personal questions: when they moved in, where they moved from, and of course why they don’t have children (the is the fifties).

That’s the cue for moving on to different eras of classic television in succession, including a brief glimpse of Monica Rambeau. It looks like showrunner Jac Schaeffer and the writing team are having a lot of fun with the concept, and that light-hearted energy dominates the trailer. “We’re an unusual couple, you know,” Wanda says as we go back to the 1950s for a moment at the end. “Oh, I don’t think that was ever up for discussion,” Vision replies. And it looks like this is going to be a highly unusual series.

There is no official release date yet, but WandaVision is expected to debut on Disney+ in December 2020. (The original plan was for a Spring 2021 release, so we’re getting it a little earlier than expected.)