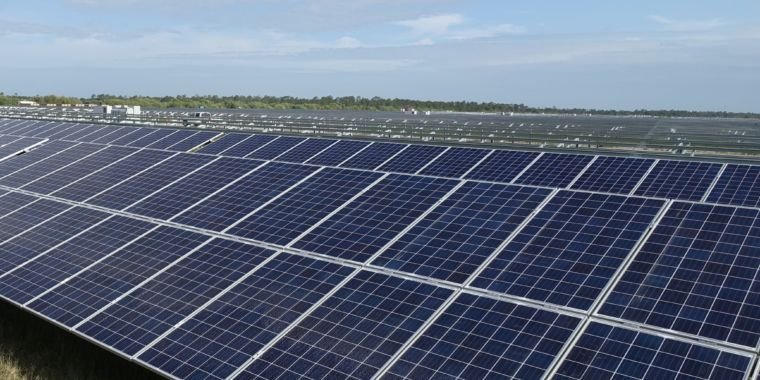 There is excitement from the solar industry, but the announcement is more bad news for the nuclear industry. Earlier this year, nuclear reactor company Westinghouse was declared bankrupt as construction of its new AP1000 reactors suffered from contractor problems and strict regulations. Two plants already under construction – the Summer plant in South Carolina and the Vogtle plant in Georgia – immediately found their futures in doubt.

Duke Energy Florida had not yet begun construction of the Levy Nuclear Power Plant, but had plans to order two AP1000 reactors from Westinghouse. With the Westinghouse company in dire financial straits, the Florida utility has decided its money could be better spent elsewhere.

Last week, Duke told its PSC it would have to raise rates by more than eight percent because of increased fuel costs. But with the new settlement that directs the utility to solar and storage, customers will see that rate hike reduced to 4.6 percent.

The Levy Nuclear Power Plant was proposed in 2008 and ran into hurdles early on. With cheap natural gas in 2013, Duke Energy Florida became nervous that it might not recoup the cost of the nuclear plant, especially with regulatory delays. The company canceled its engineering and construction deals in 2013, but said it kept open the possibility of returning to Levy one day. Over nine years, approximately $800 million had been spent on preparatory work for the plant.

With Tuesday’s announcement, those costs are now sunk costs. But overall, the changes will spare residential customers future nuclear tariff increases. Those customers will see a cost reduction of $2.50 per megawatt-hour (MWh) “by removing unrecovered Levy Nuclear Project charges,” the utility said.

The 700 MW of solar energy does not exactly cover the capacity of the Levy power station, which should supply 2.2 gigawatts to the region. But the Tampa Bay Times wrote that Duke is “basically giving up his long-held belief that nuclear power is a key component to his future in Florida and is instead making a dramatic shift toward more solar energy.”

Duke Energy Florida serves 1.8 million people and Florida is largely dependent on (currently cheap) natural gas. Duke said this week it wants to increase its solar power capacity to eight percent of generation over the next four years.

This isn’t the only planned nuclear power plant that has been canceled in recent days, either. According to GreenTechMedia, Duke Energy Florida’s parent company, i.e. Duke Energy, also pulled the plug on another planned nuclear power plant in North Carolina last week. There, the power company asked for a rate increase to cover more than $500 million in sunk costs associated with the not-yet-built Lee nuclear power plant. (It should be noted, however, that more than half of the rate increase was to cover costs associated with cleaning up coal ash sites.)

While Duke said its existing nuclear plants were a “vital part” of the energy mix, the company also said that “cancellation of the [Lee] project is the best option for customers.”

According to UtilityDive, experts do not foresee much nuclear investment in the next ten years. But experts are divided on whether focusing solely on renewable energy is a good thing. While opponents cite the cost and safety risks of nuclear energy, proponents say we need all types of greenhouse gas-free power online as soon as possible.