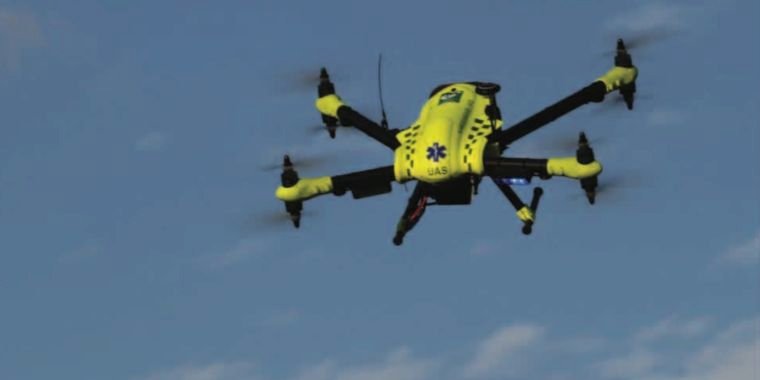 Thanks to drones, it rains condoms in villages in rural Africa. Remote islands have been quick to receive medical supplies, while researchers have winged biological specimens to distant pathology labs.

Now a research group in Sweden is buzzing about yet another type of lifesaving flight for the unmanned aerial vehicles: emergency medical flights.

In cardiac arrest, a quick response is crucial; Saving 16 minutes can make the difference between life and death. Still, the researchers, led by Andreas Claesson of the Karolinska Institutet in Stockholm, are careful not to exaggerate the results.

For the study, the researchers used an eight-rotor, 5.7 kg drone with a maximum cruising speed of 75 km per hour. It has been developed and certified by the Swedish Transport Agency. The drone was equipped with a 763g AED that allows bystanders on the scene to easily attempt to resuscitate a person in cardiac arrest.

Over a 72-hour period, the researchers sent the drone to the out-of-sight locations of 18 cardiac arrest emergency reports that were received by local authorities between 2006 and 2014. All were within a 10 km radius of the fire station, with a median flight distance of 3.2 km.

The median time from the reenacted distress call to the drone launch was three seconds, while the median time to dispatch the ambulance was three minutes. On average, the drone arrived in just over five minutes (the fastest time was 1:15 and the longest was 11:51). The EMS, on the other hand, arrived in about 22 minutes (the fastest time was five minutes and the longest was 38).

The authors point out some limitations of the study, such as only good weather for the small number of flights. And while AEDs are designed to be easy to use, it’s unclear if bystanders would use them correctly and consistently, creating actual medical benefits for drone dispatches. And of course there is also the issue of getting approval from agencies like the Federal Aviation Authority.