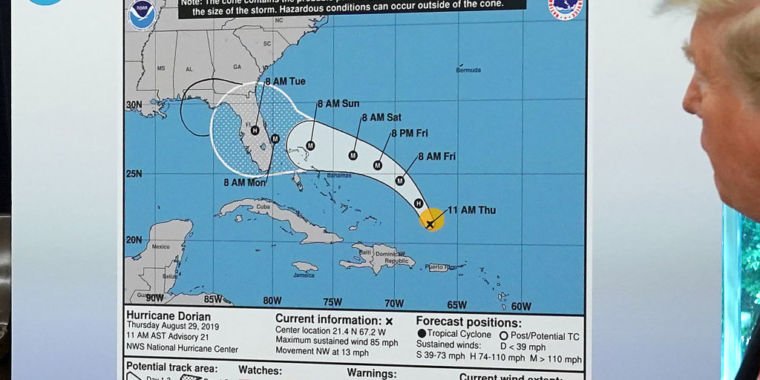 For meteorologists and senior leaders at NOAA, the first week of September 2019 will be one they will never forget.

Amid the tumult of Hurricane Dorian and its threat to the United States, President Trump injected himself into the story by warning that several states, including Alabama, “would likely be hit (much) harder than expected. He looks like as one of the largest hurricanes ever.” Alabama had virtually no risk from the storm at the time. After being ridiculed for this erroneous forecast, the president responded with an event at the White House where he displayed an official National Hurricane Forecast map with a Sharpie-drawn extension that included Alabama in Dorian’s “cone of uncertainty.”

The controversy only heated up when the National Weather Service’s Birmingham office tweeted that Alabama residents had nothing to fear from Dorian (which was correct). This tweet took place after the president’s tweet about Alabama’s risk, but was apparently not a direct response to the president. Instead, it came in response to a wave of public inquiries. According to the meteorologist in charge of the Alabama office, Chris Darden, his office’s phones began “ringing” with public questions and concern after the president took to Twitter.

In response to this sequence of events, NOAA released an unattributed statement on Sept. 6 rebuking Alabama’s forecasters: “The Birmingham National Weather Service’s Sunday morning tweet spoke in absolute terms inconsistent with the probability of the best prediction products available at the time.”

All this took place in the first week of September. The release of hundreds of emails Friday night in response to a Freedom of Information Act request from BuzzFeed News investigative reporter Jason Leopold reveals the confusion and anger in the wake of the president’s tweets in Alabama last year, from Oval Office and then the NOAA statement.

NOAA communications officials themselves were baffled by their own statement, which was released on the direction of the White House. “You’re not going to believe this BULL,” Maureen O’Leary, a public relations specialist at NOAA, wrote to a colleague.

In an email on the evening of Sept. 6, the Director of the National Weather Service, Louis Uccellini, wrote to Neil Jacobs, the acting director of NOAA, about an “upwelling” of unrest across the weather community due to the NOAA declaration. “The mood out there is pretty bad,” he said.

Craig McLean, the acting chief scientist at NOAA, was even more baffled in emails. “Now what? Climate science is a hoax?” he wrote in an email addressed to Jacobs and other senior leaders at NOAA and the National Weather Service. “Stunned to let our forecasters hang in the political wind. Embarrassed, Craig.’

At the center of this storm was Neil Jacobs, who on the one hand was accountable to the White House and Trump — who clearly did not relinquish an erroneous and irresponsible prediction — but also had the grace to realize that his workforce is being smeared in the process. “You have no idea how hard I fight to keep politics out of science,” Jacobs wrote to a NOAA employee. “The situation we are in is incredibly unfortunate. I have no words to describe how I feel right now,” Jacobs wrote to another.

The picture emerging from this trove of emails is one of officials and government employees at NOAA and the National Weather Service trying to do what was right amid a political (and homemade) crisis at the top and a natural disaster (Dorian) put pressure on them from the outside.

The extent to which Trump’s actions seriously distracted officials and forecasters at a time when they had to focus entirely on understanding the storm and warning American citizens of its consequences is significant. At the same time, the courtesy and dedication of people like Chris Darden, the meteorologist in charge of the Birmingham National Weather Service office, is quite remarkable.