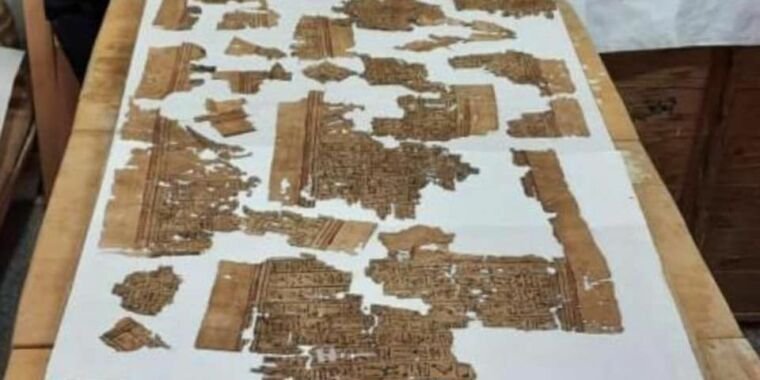 Archaeologists in Egypt are preparing to open a 3,000-year-old burial shaft in the Saqqara necropolis, south of Cairo, in the coming week.

The unexplored tomb is one of 52 burial shafts clustered near the much older pyramid of the pharaoh Teti. Workers at the site found the entrance to the newest shaft earlier this week as they prepared to announce a slew of other finds at the site, including the graves of military leaders and high-ranking courtiers, a copy of the Book of the Dead, and old board games. Among the discoveries is also the name of the owner of an elaborate mortuary temple near the pyramid of Teti: Narat or Naert, the queen of the pharaoh.

‘I had never heard of this queen. That’s why we’re adding an important piece of Egyptian history about this queen,” archaeologist and former Egyptian antiquities minister Zahi Hawass told CBS News. Archaeologists first excavated the stone temple in 2010, but it was not clear for whom the large structure was built. In mortuary temples like this one, priests and entreaties could make offerings to the dead queen to keep her comfortable in the afterlife – and ask her to help them in this world.

(Side note: Preserved examples of ancient Egyptian prayers to the dead often include reminders that if the dead don’t do their part and help the living, the living could easily forget to keep offering sacrifices and say prayers for the dead. from the mummy’s curse was really just his ungrateful grandchildren all along.)

Excavations over the past decade revealed three mud warehouses adjacent to the temple, where the priests are said to have stored tools and offerings for the dead Queen Narat. Recently, archaeologists found Narat’s name engraved on a fallen obelisk at the main entrance to the temple. The name reappeared on a wall of the temple.

The Queen’s Temple stands near her husband’s pyramid at Saqqara. Together they founded the last dynasty of the ancient kingdom of Egypt; 150 years and 6 kings later, the country slipped into the political chaos of the First Intermediate Period.

Cemetery of the rich and famous

Almost in the shadow of the pyramid of Teti, the 52 recently excavated burial shafts at the site date from the New Kingdom of Egypt, a series of dynasties that ruled from about 1570 to 1069 BCE. The earliest tombs at Saqqara predate Egypt itself and date back to the pre-dynastic period, when the land along the Nile was divided into several smaller kingdoms. For the next three thousand years, some of the great and powerful of Egypt continued to return to Saqqara to build their tombs. The 7-kilometer stretch of desert contains extensive temple complexes for pharaohs, in addition to the tombs of generals, princes and aristocrats.

Egyptian archaeologists have excavated about 50 wooden sarcophagi from the burial shafts, which are 10 to 12 meters deep rectangular pits covered with wooden planks or stone slabs. The coffins are much less ornate than royal burials, but they still suggest that the occupants were people of wealth and status. They are painted with depictions of the dead, scenes of gods and the afterlife, and lines from the Book of the Dead: a collection of prayers and instructions intended to guide the deceased through the various trials and challenges that come on their way to the afterlife. . Think of it as the original version of the Handbook for the recently deceased from the movie beetle juice†

In one of the burial shafts, archaeologists found the remains of a copy of Chapter 17 of the text. The 4-meter-long and 1-meter-wide papyrus scroll belonged to a man named Bu-Khaa-Af, who we know because his name is on it. Bu-Khaa-Af’s name also appears on his sarcophagus and on four wooden and ceramic figurines called ushabtis, which would come to life and work as servants in the afterlife.

Their presence, along with the painted coffin and high-status real estate, marks Bu-Khaa-Af as a member of the old one percent. He is buried near a military leader whose grave contains a bronze ax in case he is called out of retirement by Osiris.

Another neighbor of the cemetery is a courtier named Khu-Ptah and his wife Mut-am-wea. According to texts in his rather elaborate tomb, Khu-Ptah held the exalted position of “Superintendent of the King’s Chariot” to the New Kingdom pharaoh he served. It is not clear what exactly that function entailed; it may have been largely ceremonial, like many British court positions today, or it may have involved actual chariot maintenance.

On a carved limestone panel, we see Khu-Ptah and his wife making an offering to Osiris together; another scene shows the couple sitting with their six sons and three daughters, sniffing lotus flowers and wearing perfume cones on their heads.

The things these people were buried with suggest that they had a comfortable life and expected a comfortable afterlife. Their tombs, of course, contain shrines and statues of the gods, especially Anubis (a funerary god), Ptah (a creator god), and Osiris, as well as many ceramic vessels and pottery. But archaeologists also found board games, including a senet set.

Senet dates back to at least 3100 BCE, making the game as old as the country of Egypt itself. It seems to have been a strategy game, something like modern chess or checkers. A few surviving texts offer glimpses of the rules, and some modern researchers have cobbled together reconstructed versions of the game.

Life and death were not all pleasant, however, even for the wealthiest Egyptians of the New Kingdom. Egypt’s Ministry of Antiquities announced it had already examined the mummified remains of a woman who died of an abscess (a swollen, pus-filled lesion) on her liver, which was apparently an unpleasant souvenir of an infectious disease. Another mummy at the site belonged to a child, suggesting wealth and status were no guarantee against crushing loss.

In addition to the recently rediscovered burial shaft opening this week, archaeologists at the site are still excavating a large mud building. The Ministry of Antiquities says they expect the structure to end with a burial chamber, and so far the evidence suggests it wasn’t looted.