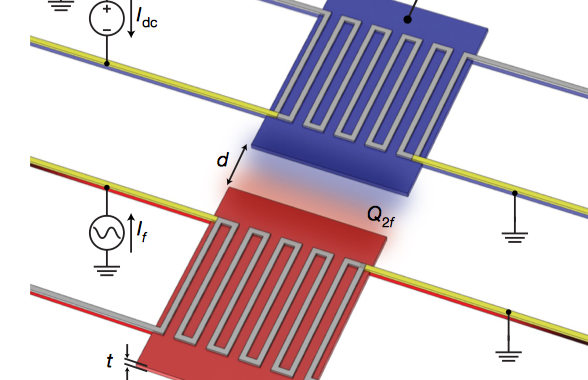 One of the hidden heroes of the modern world is heat transfer. Extracting the heat from modern electronics is a technical feat in itself. And we’ve tackled even trickier situations, such as cooling objects in the vacuum of space.

Heat transfer is governed by laws that have been tested for over a century. These elder laws are usually undefeated and unbeatable. But there are a few exceptions. And researchers have now found another exception: exceeding the limits of radiant heat transfer.

So hot it glows

In electronics, heat can be dissipated to large surfaces, where convection does the rest. In space there is no convection; everything has to be radiated. The nice thing about radiant heat transfer (often called “blackbody radiation”) is that it: radiation. Heating and cooling can take place over long distances – light from the sun warms the earth through radiant heat transfer.

A less nice property of radiation transfer is the efficiency. The temperature difference between the heat source and the heat sink must be quite large for a reasonable amount of energy to be transferred. In most cases, radiant heat transfer is negligible, but once the temperature rises substantially, conduction and convection dominate.

A more detailed exploration showed that if either of these two conditions were violated, the transfer of radiant heat could be made more efficient. In particular, the new theory predicted that there may not even be a limit to heat transfer from objects physically smaller than the wavelength of the light they emit. That seems pretty cool (or hot, depending on the perspective).

Previous work had shown that if the source and sink were close together, the radiant heat transfer could significantly exceed the limits of black body radiation. However, this was not successful in all experiments with small transmitters and receivers. In the latest installment of the story, researchers have finally shown that the blackbody law can be beaten for objects that are far enough apart.

The researchers made a pair of very thin silicon nitride membranes lying side by side. By looking at each other, the thickness of the membrane becomes the critical dimension of the radiator. The researchers used membranes that varied in thickness from 270 nm to 11 micrometers. In comparison, the wavelength at the peak of the blackbody radiation spectrum for the membrane was about 10 micrometers – this corresponds to room temperature.

The measuring technique is also really cool. A small thread was deposited on both membranes. In one membrane, the wire received an alternating current to periodically heat it. With the other membrane, the researchers measured the resistance of the wire, which is temperature dependent. They only looked for a signal at half the period of the heating current. That way, even if there were environmental anomalies or other forms of noise, the researchers only picked up the temperature changes due to the test membrane.

The researchers show that the thinnest membrane transfers heat at about 100 times the rate predicted by the black body’s radiation law. However, the thickest membrane could only transfer heat at the rate indicated by the law.

That’s pretty incredible. It can even make for a good party story. But it probably won’t do any major cooling just yet. Hidden in the details is an inconvenient fact. The thinnest membranes also had the smallest absolute heat transfer rate. The black body radiation law scales with the size of the emitter (and sinks), so in absolute terms the thick membranes still win. They just don’t win as much as expected.

Don’t take that as a disappointment, though. First, it gives some hope that we can improve heat transfer on a larger scale by combining many small emitters. It is also important to remember that extracting heat from very small appliances is still a very big problem. This work offers another way to improve thermal properties in the very first steps of the journey from small device to large heat sink.