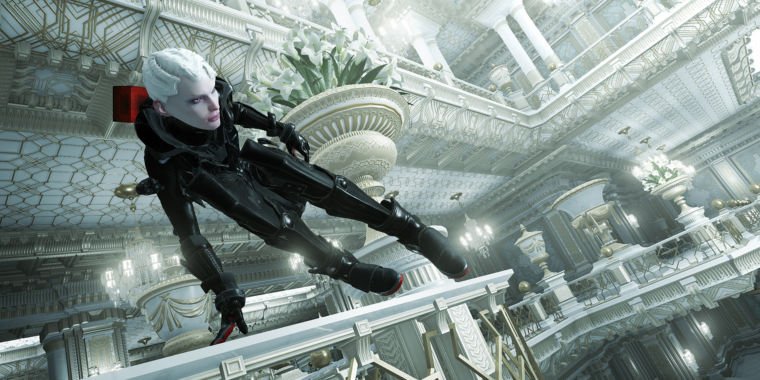 The reference books on the shelves of developer Ultra Ultra’s modest office in Copenhagen offer insight into the aesthetics of the first game, Echo. There is a book on 19th century interior design and a book on Venetian photography. Prometheus: the art of cinema and Star Wars provide sci-fi reference points, while Metal Gear Solid, Blame! and Neon Genesis Evangelion– all three of which are displayed on the shelf in one form or another – are the inspiration for character design.

Echo consists of many familiar parts, but parts that have been remixed in a way that makes them feel like new. This is fundamental to Echo not only aesthetically, but also mechanically. Not surprising, considering the Ultra Ultra staff of ex-IO Interactive hitman developers, Echo is a stealth game. It learns from your actions to figure out how you play the game. This causes you to regularly guess your tactics, almost as if you were playing chess against yourself.

The third-person camera and cleverly placed walls and corners that serve as cover are all familiar, but the overall atmosphere is different. This is much more of a reactionary stealth game than we’re used to. As such, this isn’t a game you can just sleepwalk through even if you’re familiar with the genre.

“How do you handle your own playstyle? That’s the core of our gameplay, and it can be interpreted and done in a million different ways,” explains Martin Emborg, CEO of Ultra Ultra and Echo‘s game director.

“People originally thought we were making a game that used some form of long-term machine learning where, if you played the game for hours on end, it would eventually become you and copy exactly how you play. We didn’t want to do that though. We had some early prototypes where the game became a representation of how you interact with it on a macro scale, but we found that that got extremely punishing.”

These iterations of the game were not only punishing, they were predictable and boring. If you performed a certain action at the very beginning, you would probably never be able to perform it again as the machine could see it coming. As such, your quota of potential moves is reduced with each playing session. At the end of the game you will hardly have any strategies left to use.

To counteract this lack of dynamism, Emborg and his team opted for a system in which the AI ​​learns and unlearns from you. This means that you are always aware that the game is watching you, as you will see the enemies change their approach regularly. But it also forces you to pay more attention to these enemies, as you’re not always immediately sure what they do or don’t know at any given time.

“From that idea of ​​learning and unlearning, we create the idea of ​​cycles and blackouts so that the player is encouraged to have a very real sense of what they are doing and when and why,” Emborg continues. “With each cycle, you play against the last cycle, and when the blackout happens, you have a chance not to worry about how what you do will affect the next.”

Echo is structured as a series of cycles, moving through two modes: lights on and eclipse. Whatever you do when the lights are on will be passed to the AI ​​on the next cycle. Once you perform a certain number of actions, the AI’s memory will max out and turn off the lights to prepare for the next cycle. In the dark, the AI ​​cannot see what you are doing and therefore cannot learn from you.

In the beginning it is impossible to know what the AI ​​has picked up as it is never made clear before playing which actions are learnable. I played for about an hour and at the end of that hour I was still not sure what the AI ​​had learned.

The ability to sprint, crouch, and fire weapons are pretty obvious skills that can be learned, but there are more surprising examples. And, the protagonist, can perform stealth kills when he approaches an unwitting enemy from behind, and the AI ​​learns this from you. Dying in this way is a humbling experience, one that illustrates that you just don’t pay enough attention to your surroundings.

The AI ​​can also learn how to replenish its health with food in the environment, how to operate elevators that provide access to different levels, and that it is safe to walk on shallow water. You might decide never to walk on water to create more barriers between you and enemies in a future cycle, but this makes it harder for you in the present.