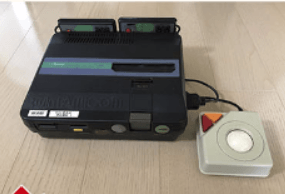 Every programmer of a certain age probably has a horror story about some rinky-dink coding and workflow environment that forced them to hack a working app together under extreme hardware and software limitations. Still, we’re pretty sure none of those stories can beat the keyboard-free coding environment that Masahiro Sakurai apparently used to create the first Kirby’s dreamland.

The treat comes from a talk Sakurai gave before a Japanese orchestra performance to mark the 25th anniversary of the original Game Boy release of Kirby’s dreamland in 1992. As reported by Game Watch (and beautifully translated by Patreon-supported Source Gaming), Sakurai recalled how HAL Laboratory used a Twin Famicom as a development kit at the time. Trying to program on the hardware, which combined a cartridge-based Famicom and the disk-based Famicom Disk System, was “like using a lunchbox to make lunch,” Sakurai said.

As if the limited power wasn’t bad enough, Sakurai revealed that the Twin Famicom testbed they were using “didn’t even have keyboard support, meaning values ​​had to be entered with a trackball and an on-screen keyboard.” Those kinds of visual programming languages ​​may be in vogue now, but having a physical keyboard to type in values ​​or edit instructions would probably have been welcome in the early ’90s.

Sakurai, who was 20 at the time, says he just thought this keyboard-less programming environment was “the way it was done,” and he coded a fully functional test product using just the trackball. In fact, he says the process has led to some improvements in the management of the game’s “data processing load,” creating “a game with very smooth motion for a Game Boy game.”

The rest of Sakurai’s translated presentation is well worth reading to see pictures of the programming environment he was using. You can also read how Sakurai squeezed his game into just 512 kb of space (less than a pixel of data in a game like Super Smash Bros. on the Wii U, he said somewhat figuratively), hard-coded enemy movement paths in hexadecimal, and even created a prototype of the Super NES game Kirby Super Star on the original Famicom. For those who want to recreate similar frustrations to those in Sakurai’s old programming environment, may we suggest hacking a binary keyboard together?