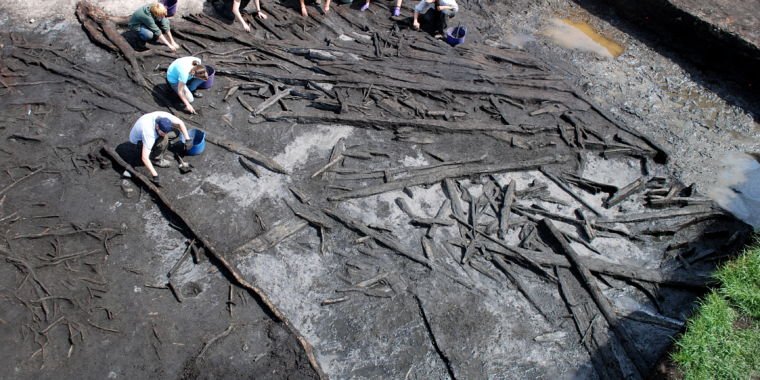 A new study finds that people in a well-situated spot in early Holocene Britain coped remarkably well with rapid climate change. Archaeologists and paleoclimate researchers combined sediment core data with data from a large Stone Age site to reconstruct how hunter-gatherer communities adapted to a series of unpredictable centuries-long cold spells about 11,000 years ago. And it turned out that at least one group of hunter-gatherers seemed completely unfazed.

During the early Holocene, about 11,000 years ago, northern Europe emerged from nearly 100,000 years of cold storage under thick ice sheets, and rising sea levels had not yet cut Britain off from the rest of western Europe. When the last of those ice sheets plunged into the sea, their effect on ocean temperature and circulation triggered several periods of regional cooling, each lasting about a century. Meanwhile, small hunter-gatherer communities began to drift back into Northern Europe.

“These societies not only occupied northwestern Europe, but were the first populations to attempt to recolonize this region after the last ice age,” wrote Simon Blockley of the Royal Holloway University of London. Blockley noted that they did this “against a backdrop of some of the most extreme abrupt climate events known from the Holocene.” One would expect that communities in that situation – just getting a foothold in a new country and at the mercy of an unstable environment – would be quite vulnerable to the vagaries of the climate.

So Blockley and his colleagues used their new study to look at how Europe’s troubled early Holocene climate affected those newcomers. Some studies suggest that sudden periods of cooling caused a massive population collapse in Britain and Ireland about 8,200 years ago, while others argue that early Holocene hunter-gatherers were much more resilient than that. To settle the debate, researchers need to understand when these climate changes happened and compare that data to the archaeological finds.

But there aren’t many sites in northwestern Europe where archaeological material is dated well enough to allow that. One of the exceptions is Star Carr, a Mesolithic archaeological site in what is now North Yorkshire, UK. Today the site is surrounded by farmland; 11,000 years ago, it lay at the western end of a large lake, now known as Paleolake Flixton, and was surrounded by a reed-like wetland. The layers of sediment that once lay at the bottom of Lake Flixton are still there, buried beneath the peat deposits that helped preserve the vast collection of Stone Age artifacts.

A team of paleoclimate researchers led by Blockley took sediment cores from what was once the deepest part of Lake Flixton. Throughout the sediment layers, small fossilized animal and plant remains still contain oxygen molecules from the late Holocene in their shells, offering paleoclimate researchers a way to estimate average temperatures at the time each layer settled on the lake floor. In general, rain contains more of the heavier oxygen isotope (oxygen-18) when the temperature is lower, so oxygen isotope ratios in sediment layers contain information about ancient temperature variations.

Using radiocarbon dating and deposits of volcanic ash drifted to Star Carr from distant eruptions, the team was able to date the layers. When they lined up with radiocarbon dates of artifacts in Star Carr, the researchers had a side-by-side comparison of climate events and human activity in the area.

They identified two abrupt climate events in the early Holocene portion of the record. The first, about 11,400 years ago, lowered summer temperatures by about 1.5 degrees Celsius. That may not sound like much, but it can have a major impact on some plant and animal species. And winters during the centennial event appear to have been much harsher, as the team estimated a 10 degree Celsius drop in average annual temperatures.

People just settled in the Star Carr area around this time, and they laid out a scattered mix of engineered and natural woods and other artifacts to provide a sturdier base for the muddy edge of the lake, acting as a very rudimentary boardwalk. . Among the wood, they left animal bones, barbed projectile points, flint blades, deer antler headdresses, and other artifacts.

“We think most of the materials were deliberately placed there for ritual purposes,” said University of York archaeologist Nicky Milner, one of the study’s co-authors. An elk skull, placed among the wood waste in the earliest stages of use, appears to have a similar placement to a set of elk bones found at a site in Denmark – both were carefully wrapped in hides before being placed. Modern hunter-gatherers around the world deposit animal remains and other artifacts in key locations in similar ways.

The centuries-long cold spell doesn’t seem to have stopped these post-glacial hunter-gatherers from living next to Lake Flixton and the adjacent wetlands. In the archaeological finds at Star Carr, layers of processed wood and artifacts were deposited during the climatic event 11,400 years ago.

The cold spell may have slowed the settlement expansion process, but archaeologists and paleoclimate researchers can’t say for sure yet. But even in a population that appears to be very vulnerable to climate change, there’s no evidence that the Star Carr community has experienced a population crash or left the area for a warmer and more welcoming place.

By 11,100 years ago, when the climate suddenly turned cold again, people had settled here in greater numbers and began to build large wooden platforms around the edge of the lake, as well as structures further inland that archaeologists say were likely houses. These are the oldest structures and the oldest evidence of carpentry in Britain. They appear to have been the community’s way of getting better access to Lake Flixton as the water level gradually began to drop.

Around this time, the average temperature dropped by about 4 degrees Celsius. The region around Star Carr, like most of the rest of the British Isles, was slowly shifting from brushy grasslands to forests at the time, but there is evidence in the pollen record that the abrupt cooling stopped that process here, at least temporarily. . Folks at Star Carr stuck it out, though, and their building projects seem to indicate that they did a lot more than just hold on with frozen fingers.

“They certainly had the skills to survive, and they certainly seemed to eat the same kinds of animals as at other times,” Milner said.

Star Carr’s hunter-gatherers apparently took a close look at the wildly oscillating climate. Both events recorded in Lake Flixton sediment cores — which also occur in Greenland ice cores — were at least as severe and lasted at least as long as an 8,200-year-old event accused of wreaking havoc on early British populations. According to Blockley and his colleagues, that’s proof that the unpredictable, generational cold spells of the early Holocene didn’t necessarily spell the demise of hunter-gatherers, even with their rather weak position on the continent.

But it doesn’t mean that people everywhere have weathered the cold as well as it seems at Star Carr. The environment and culture probably had a lot to do with that, Blockley and his colleagues say. The landscape of Star Carr was a mosaic of wetland, open grassland, shrubs and forests, providing several food sources for hunter-gatherers, as well as ecosystems less affected by refrigeration in the first place.

“Star Carr’s resources were broad and are likely a major reason for the site’s occupation,” Milner said. “They may have helped protect them from abrupt climate events.”

But as Lake Flixton gradually filled with peat deposits and the surrounding landscape shifted to a vast swampy forest area, people gradually drifted away from Star Carr in search of a better place to make a living. The area’s ecological diversity helped people survive a climatic roller coaster ride, but they couldn’t overcome the loss of that diversity.

People in less diverse environments might have had a harder time adapting if the cooler climate had more of an impact on the local flora and fauna. By the time temperatures dropped 8,200 years ago, most of the British Isles were covered in forests, which are more sensitive to changing temperatures.

Milner says it’s important to examine similar sites in other locations in northwestern Europe to get a more complete picture of how early Holocene humans coped with the unstable climate in different places. And while it’s comforting to consider that even Stone Age hunter-gatherers were able to handle drastic temperature swings with the classic British stiff upper lip, Milner warns that modern societies face a very different situation.

As the Greenland ice sheet melts, the sudden flood of cold freshwater in the North Atlantic can cool western Europe just as the melting ice sheets of the early Holocene did, but small groups of hunter-gatherers have more flexibility than large urbanized societies.

“In addition, the people of Star Carr were part of a tradition that had seen dramatic climate changes at the end of the last era. Extreme climatic instability was part of their way of life,” says Milner. But we have had a stable climate for thousands of years. “Whether we have the potential to show the same resilience to sudden extreme climate change as the people of Star Carr has yet to be tested,” she said.