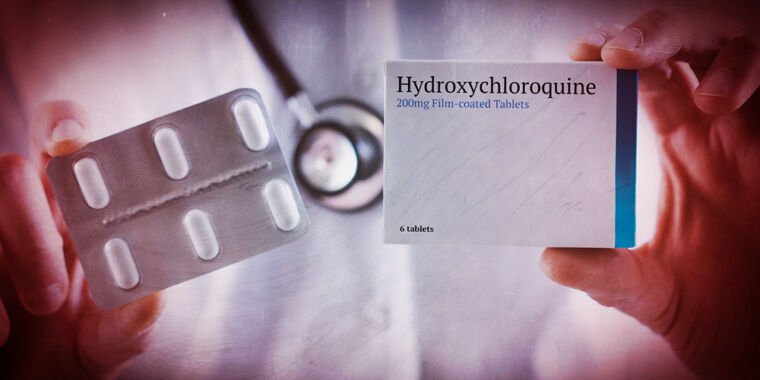 The medical journal Lancet released a “statement of concern” on Tuesday about the validity of a recent study suggesting that the antimalarials chloroquine and hydroxychloroquine increase the risk of death and heart complications in hospitalized COVID-19 patients.

More than a hundred outside experts have expressed questions and skepticism about the data and analysis, even as researchers halted clinical trials in light of the study’s findings.

The two drugs at the center of the controversy have received a lot of attention during the pandemic, with many prominent figures — notably President Donald Trump — promoting them as effective against COVID-19. On May 18, Trump even told reporters that he was taking the drugs himself to prevent infection with the new coronavirus, SARS-CoV-2.

Despite the publicity, there is little evidence to support the efficacy of chloroquine or its analog, hydroxychloroquine, to prevent or treat COVID-19. Small studies conducted so far have only produced mixed and inconclusive results in COVID-19 patients. The two drugs are only approved for use against malaria and autoimmune diseases, such as lupus and rheumatoid arthritis. They have also long been associated with risks of heart complications.

The limited evidence for use against COVID-19 and the known risks prompted the Food and Drug Administration to issue a safety warning that the drugs “should be limited to clinical trial settings or for the treatment of certain hospitalized patients.”

In the Lancet study — published on May 22 and reported by Ars — researchers sought to shed some light on the drugs’ effects on COVID-19 patients. The researchers claimed to do this using the largest set of data to date, involving more than 96,000 hospitalized COVID-19 patients from six continents. According to the authors, a thorough hashing of the data indicated that those taking either hydroxychloroquine or chloroquine had significantly higher risks of death and cardiac complications compared to COVID-19 patients taking neither drug.

The safety issues were worrisome enough that the World Health Organization announced on May 26 that it was suspending the use of hydroxychloroquine in its global Solidarity Trial, which is evaluating several potential COVID-19 therapies. Regulators in the UK and France also changed their recommendations around the drugs.

Amid the global influence, outside researchers began to scrutinize — or at least tried — the data behind the study and continued to worry.

In an open letter to the study authors and The Lancet, outside experts outlined ten key issues ranging from inadequate statistics, data irregularities and a lack of ethical judgment. The letter was signed by more than a hundred researchers.

The crux of the problem is that the data used for the study came from an Illinois-based data analytics company called Surgisphere. The company claims to have collected a huge wealth of data from electronic health records held by hundreds of hospitals around the world. However, Surgisphere says it cannot share this data due to data usage agreements with the hospitals.

This is problematic for critics, who are skeptical? of the data the company claims to have and would love to see it for itself and confirm that the analysis is accurate. For example, in the open letter, outside experts noted that:

Data from Africa indicates that nearly 25% of all COVID-19 cases and 40% of all deaths on the continent occurred in Surgisphere-affiliated hospitals that had advanced electronic patient record-keeping and patient monitoring that “unsustainable.” [at least 6 secs] or sustained ventricular tachycardia or ventricular fibrillation.’ Both the number of cases and deaths and the detailed data collection seem unlikely.

In addition to a lack of transparency on the data, a report from The Scientist magazine also noted that Surgisphere founder Dr. Sapan Desai, has a less than pristine past. The magazine noted that Desai, who trained in vascular surgery and founded the company in 2008, resigned from a hospital position shortly after three medical malpractice lawsuits were filed against him in 2019.

Furthermore, before Desai and Surgisphere turned to data analytics, selling medical textbooks was their most public activity. According to The Scientist, the textbooks had fake 5-star reviews on Amazon from accounts masquerading as real doctors. One of the mock doctors, a breast surgical oncologist, told the magazine that she and colleagues eventually got Amazon to remove the reviews.

For several years, Desai also published a medical journal called the Journal of Surgical Radiology, which shut down abruptly in 2013, despite the website claiming to have garnered 50,000 subscribers in a short period of time.

In response to criticism and skepticism about the COVID-19 data, Surgisphere has issued a statement saying, in part, that it will submit to an independent audit of its data. On May 30, some of the minor discrepancies in the data, including a mislabeled hospital, were corrected in The Lancet.

Surgisphere wrote in its statement that it:

[V]It is vital that our scientific colleagues around the world understand the validity of our database, especially with regard to data acquisition, storage, analysis and related reporting processes. We are committed to demonstrating the high standards we maintain at Surgisphere, and the robustness of the work completed.

Nevertheless, The Lancet expressed concern about the study on Tuesday, saying that “although an independent audit of the origin and validity of the data has been requested by the authors who are not affiliated with Surgisphere and is underway, results are expected very soon.” , we are expressing a concern to alert readers that serious scientific questions have been brought to our attention and we will update this post as soon as we have more information.”

Two other COVID-19-related studies using Surgisphere data have also been questioned. The New England Journal of Medicine has expressed its own concerns about a Surgisphere-related study. The study looked at the effect of pre-existing use of angiotensin-converting enzyme (ACE) inhibitors and angiotensin receptor blockers (ARBs) in COVID-19 patients. Researchers have also questioned a preprinted study (one that has not yet been published or peer-reviewed) that looked at the antiparasitic drug Ivermectin for COVID-19.