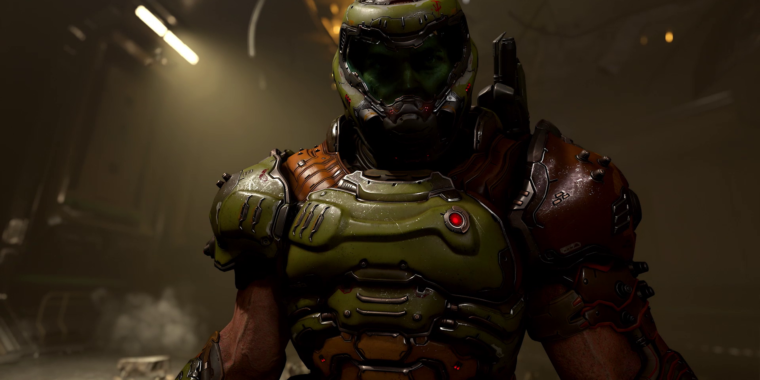 SANTA MONICA, California – I don’t often get as excited about a video game in development as I do about DOOM Eternal† After playing the 20-minute E3 demo for the first time, I screamed, “AGAIN! AGAIN!” like a kid who didn’t want to get off a roller coaster (and luckily got another chance). When I got home and prepared this article for Bethesda’s Sunday E3 press conference, I flipped through a full playthrough video provided by the developers as a sad ex flipping through a photo album. I had to look again. I wanted to remember.

That’s not my normal way; I am a gambling addict, to say the least. And yet it strikes me how perfectly iterative this game feels – a perfect execution of the cheap poster quote: “If you liked DOOM 2016 you will love it DOOM EternalBy bringing out familiar elements and then charging them with compelling twists, DOOM Eternal (launching November 22 on Windows 10, Xbox One, PlayStation 4 and Google Stadia) could very well rank alongside previous elite sequels such as Super Mario Bros. 3† Uncharted 2and Burnout 3: Takedown†

I mention those particular sequels because they each returned to unsurprising gameplay mechanics and art styles, only polished like crazy, and met a countless number of new features that all fitted in one way or another. DOOM Eternal falls into that category, so much so that a peek at the supercharged screenshots shows a mix of “ooh, crazy demons” and “uh, haven’t we seen this before?”

Indeed, id Software returns to the idTech 7 rendering engine for this super-fast 60 fps combat frenzy (technically, our demo PC kiosks used variable refresh monitors that ramped up to 90 fps and above). In addition to returning monsters, the ruthless “glory kill” mechanic still dominates. That prompts players to use a special melee attack when an enemy is on its last legs. Do this and you’ll deliver a dramatic “death” blow that also coughs up beneficial health elements. As always, this strikes a tantalizing balance of risk and reward by encouraging players to simply rush into a crowd.

You’ve seen all that before to some extent. But not like that.

For starters, the Glory Kill concept is covered in hot sauce by offering a few extra melee-for-boost options. The first is a “flame belcher,” which has a recharge timer and spews a wave of fire from a shoulder-mounted tower. Any enemies you kill while being set on fire will explode in armor pickups.

There’s also a new meter to manage, which fills up as you collect more glorious kills. You can spend this meter on an overcharged melee attack called the ‘blood punch’, which deals explosive damage to anything you hit and anything nearby (no wait for stagger required). I haven’t had enough time with this to see if it’s insta kills each enemy, but this option proved useful enough to clear a mob when a battle got too hot.

Another kind of “mod” support

In addition, every weapon seems to get at least one new “right-click” modification. The double-barreled super shotguns DOOM Eternal twist had already been revealed: a grappling hook (called the meatook) that sticks out of your gun, grabs an enemy and throws you straight into that demon’s face. I came to discover the secret sauce when I actually used this attachment – you have to shoot with your gun a moment before you think you should. The momentum of your grappling move will drive all this hail right into your enemy, then Throw yourself away from the enemy via the recoil of a shotgun so you can bounce cleanly to your next threat. What looked cool in last year’s trailer just feels better in action.

The machine gun gains a “precision bolt”, which requires you to hold a sniped perspective long enough to charge a single bullet. And, I wouldn’t know, enemies now have some weaknesses (shields on limbs, body-mounted guns) all of which can be ripped off with one of these bullets. The eight-legged Arachnotron conveniently appeared right after I outfitted this mod, and many of its parts were clearly destructible, as evidenced by shiny, metal mounting points.

I took advantage of a second playthrough of this mission to focus on this aspect, and it’s pretty solid in action. The precision bolt provides enough momentum to focus and weaken this enemy, then zoom around and club other enemies with standard machine gun fire before returning to focused, limb-stripping sniper rounds. If you just want to take out smaller enemies with a single headshot, the precision bolt will take their heads off too.

Other new mods include the “arbalest”, whose loaded rounds get stuck in enemies and explode shortly after insertion. It also has a larger blast damage radius when fired at flying enemies. Then there’s the plasma gun’s ‘microwave beam’, which you can use to pump an enemy full of radiation. Aim that beam at a single enemy long enough, and it will also hurt nearby enemies with an explosive beam. (The bigger the radiation casualty, the more sustained fire was needed, but of course a bigger boom.)

After I completed the demo, Creative Director Hugo Martin gave me a hint about another basic weapon mod we hadn’t seen yet: a freeze gun. Shameless jerk of an old man Duke Nukem 3D favorite? Could be. But if it turns out to be fun, I’ll forgive you the offense.