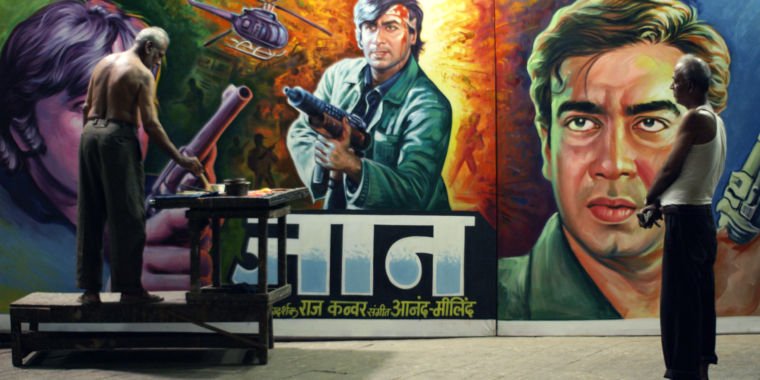 AUSTIN, Texas—Shocking, I know. But at a hard-core movie nerd event like Fantastic Fest – Austin’s, if not the most important genre film festival in the US – the documentary subjects dominate. This year’s list includes big names like Morgan Spurlock (Rats) and Werner Herzog (Salt and firethe director’s return to South America 35 years later Fitzcarraldo strengthened his stature). Other documentaries touched on everything from material wealth at all costs (Fraud) to Stanley Kubrick’s driver turned personal assistant (S is for Stanley).

Local film critic (and Internet radio legend) Matt Shiverdecker told me that the beauty of Fantastic Fest is that one viewer’s least favorite movie is inevitably someone else’s perfect-10. So at a movie-obsessed festival in a movie-obsessed city (seriously, have you tried a Drafthouse yet?), the two docs that stood out the most were, well, movie-obsessed. 24×36 and Original copy nominally share a unique focus – movie posters – but seeing the two documents side by side emphasizes the diverse programming of the festival. Here, stories suitable for the History Channel can immediately follow another suitable for the IFC, owned by Sundance.

Free up some wall space

When Canadian poster collector and director Kevin Burke started his filming trip to Austin, the border patrol stopped him. (After all, here’s this guy traveling with an unusual amount of film gear.) Burke kept his cool and explained his intent: production work for his documentary 24×36, a “movie about movie posters.”

“Who the hell wants to see a movie about movie posters?” Burke recalled that Border Patrol had asked when introducing his film. “Well, now we’re at Fantastic Fest, so fuck that guy.”

In the aesthetic battle between Border Patrol and Burke, I’m on the filmmaker’s side. 24×36 (which is the modern size of screen prints produced by companies like Mondo) is part American film promotion history and part video art gallery, part survey of modern artists, and part nerdy fan letter. I learned more about movie posters than ever in 86 minutes down a Wikipedia rabbit hole. I noticed that I had also subscribed to the Mondo newsletter.

24×36 largely takes place in chronological order. First comes the introduction of lithography (yes, the printing technique) and shortly after that, discussions turn to the 11x14s (lobby cards) and 14x22s (window cards) of early film. Burke pays homage to forgotten giants like Reynold Brown (Attack of the 50-foot woman), whose sci-fi heyday in the 1950s was a time when movie companies didn’t actually keep posters or allow artists to sign them directly. Want to find these these days? Auctions are getting pricey, so you’re better off hunting in real estate sales or within the insulation of old houses (yes, thinking the posters had little to no value, homebuilders of the time found another use).

Today’s pop culture fans will probably be most interested in 27x41s (aka, the one-sheets that became popular in the 70s and 80s). We spend time with family and colleagues of movie poster giants: Bob Peak (Star Trek, Apocalypse Now, My Fair Lady ea), John Alvin (ET, Aladdin, Flaming Saddles) and Drew Struzan (Star Wars, Indiana Jones, Back to the Future). Plenty of anecdotes come out along the way – Alvin has secretly put his name on posters, even when he didn’t mean to (look closely at Earth on ET), and Peak made two versions of it Apocalypse now because Francis Ford-Coppola was brawling with Robert Duvall and demanding his face be removed from the final poster.

As a document made by a self-professed fan, it’s no surprise that things get a little indulgent. Especially the last third of it 24×36 may get too deep in the weeds for people who are only casually interested in movie posters. After introducing viewers to the current revival pioneered by Mondo (which drew applause from his hometown audience) and highlighting work and styles from the likes of Phantom City Creative, Skuzzles, and individual artists like Tyler Stout, this one wades movie heavy in the modern marketplace.

A lot a lot of time is spent ruminating studios’ preference for safe (see the continuation of the ’90s floating head trope, which killed illustrated posters), posters instead of commissioning expensive artwork, discussing artists who acquire licenses versus those who don’t, and analyze whether the secondary market is good (“Hey look, ask!”) or bad (“Should an artist print more if art goes to scalpers, not fans? Does that devalue a print not?”). Clearly, current history is still in progress, which makes digging out anecdotes and enumerating greater importance difficult. But this part of the documentary becomes less of a look at film through posters and more of a limited analysis of the print ecosystem itself.

Still, 24×36 moves fast and keeps even those only peripherally interested in posters engaged throughout the 86 minutes. And as the desire for illustrated film prints continues to grow, this documentary could even be slightly prior to the format’s mainstream moment. As one of Burke’s more than 50 interviewees from across North America puts it, these “are not just a tool to sell movies. Poster art is art again.”

24×36 had its world premiere at Fantastic Fest. Future showings should be listed here eventually.