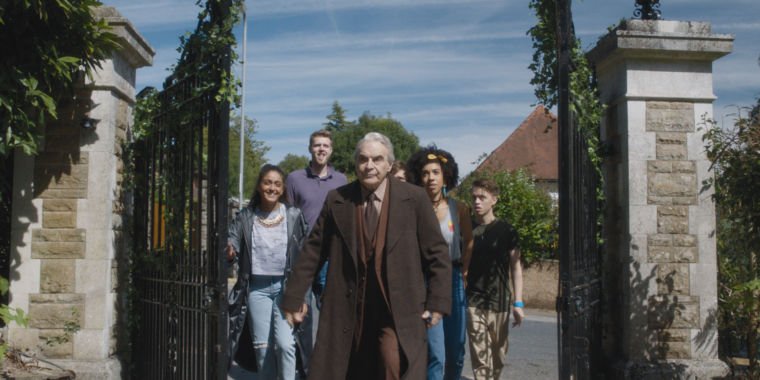 This is a review of a post UK broadcast of doctor who: Knock Knock. River Song always warned the Doctor about spoilers, so watch the episode first. doctor who airs on Saturdays at 7:20pm UK time on BBC One, and 9:00pm EDT on BBC America.

For the second time in this series — showrunner Steven Moffat’s final hurrah on the TARDIS console — the walls are inhabited by insect-like creatures. In Smile, worker microbots – called Vardies – are the walls. That idea is echoed in part here, albeit in a different setting: Bill (Pearl Mackie) and the Doctor (Peter Capaldi) are back on the present Earth (my favorite doctor who episodes are often the ones that give us aliens in the most ordinary of backgrounds).

Bill is looking for a new home with five penniless fellow students who have rightly overlooked the fact that she recently served them crisps in the college cafeteria. And right away, Bill is the leader of this crazy gang as she fearlessly goes to check the kitchen when the students are startled by a strange noise. She discovers a clattering doctor who examines the “lots of wood” house.

The awkward exchange between the pair reminds me of the awkward dynamics of a young person trying to look cool in front of new friends, while trying to shake off the claustrophobic attention of an older relative. Bill even tells the gang that the doctor – their teacher – is her grandfather.

“This is the part of my life that you’re not in,” Bill later recalls the doctor, insisting on staying.

The tuning fork-wielding Landlord (superbly played by David Suchet) heightens the eerie theme of Knock Knock. And it soon becomes apparent that it might be best for everyone to act like a tree and leave.

“You’ve signed the contract and now it’s time to pay!” the mean landlord (is there another kind?) tells his tenants, who clearly haven’t read the fine print, which may have indicated that their other roommates were aliens. are woodlice.

The Doctor works by various names, “wood nymphs, tree spirits,” before settling on “dryads.” He tells Harry (Colin Ryan) that the creatures are not just in the woods, but “they are becoming the woods”. It takes a high-pitched sound to lure them out of food, which explains the landlord’s tuning fork.

For much of this episode Bill is separated from the Doctor and instead she works her way through the haunted house with new friend Shireen (Mandeep Dhillon). The storyline is a bit of a horror-to-numbers as Bill’s friends are repelled one by one by the alien woodlice. The on-screen effect is quite stark, if thoroughly gripping, and reminds me of the carnivorous scarabs in the mummy.

The whole thing is then ghostly ramped up to 11, thanks to the awesome binaural sound design. On at least one occasion, Knock Knock made me jump – and I’m not the jumpy type. Viewers who tuned in to the episode when it aired on TV Saturday night may want to take another look – and listen – by checking out the iPlayer version. Here’s the BBC’s obligatory plug, saying the binaural audio edition “creates a 3D surround sound effect for anyone wearing headphones, putting them at the heart of the action in this nail-biting episode.”

Do you feel bad?

Also in this series we are reminded that Bill knows her way around science fiction and adventure movies. So her reference to Indiana Jones comes as no surprise when she tries to find the hidden entrance to the tower at the top of the house.

There is also a funny reference to I’m a celebrity, get me out of here! while Shireen stomps on an alien woodlice, thinking she can crush it with her foot. But instead she gains the upper hand – she crawls into her shoe, before an army of things quickly swallow her!

The theme plague in Knock Knock—written by the first time doctor who writer Mike Bartlett – feeds on the fear of being overwhelmed by something horrific in your own home. But it’s cleverly reversed here: While the audience is undeniably itching, the landlord’s mother, Eliza (Mariah Gale) has been kept in wood for 70 years by the sinking monsters.

It’s good to see Bill and the Doctor talking their way out of this last scrap with aliens. “Info dump then busk,” the Time Lord tells his companion as the dryads run toward her. There’s also a good time for Bill, who lost her mother when she was a child, to relate to the landlord’s pain, begging, “If you could protect the one who brought you into this world, wouldn’t you?” ?”

I was relieved to see Eliza bring Bill’s comrades back to the hungry house while she let the dryads feast on her and the creepy landlord. But why were the students able to return so easily? Surely they were dead wood? And if they could be brought back, why not return the previous tenants, from 1997, 1977, 1957, and so on? That would have been nice.

Maybe the BBC couldn’t extend to all those extras. Despite minor glitches, Knock Knock is great and, just as Moffat and Capaldi get closer to the exit, season 10 of doctor who starting to look like it means business.

Nardole – who is still guarding the “quiet friend” in the mysterious vault – resurfaces at the end of this episode. ‘See. You don’t have to leave the room to find monsters,’ he tells the doctor.

Once the Time Lord fires Nardole, he starts talking from inside the vault to whoever is playing a piano. Which reminds me of the most recent series of Sherlock— another Moffat vehicle.

I am now convinced that Missy is locked inside. “I know you to miss it all,” the doctor certainly teases…

The next episode of Doctor Who, titled Oxygen (season 10, ep 5), will air on Saturday, May 13. As always, check in for Ars’ review right after broadcast.